Flatiron Works to Rebuild I-820 East Loop in Fort Worth 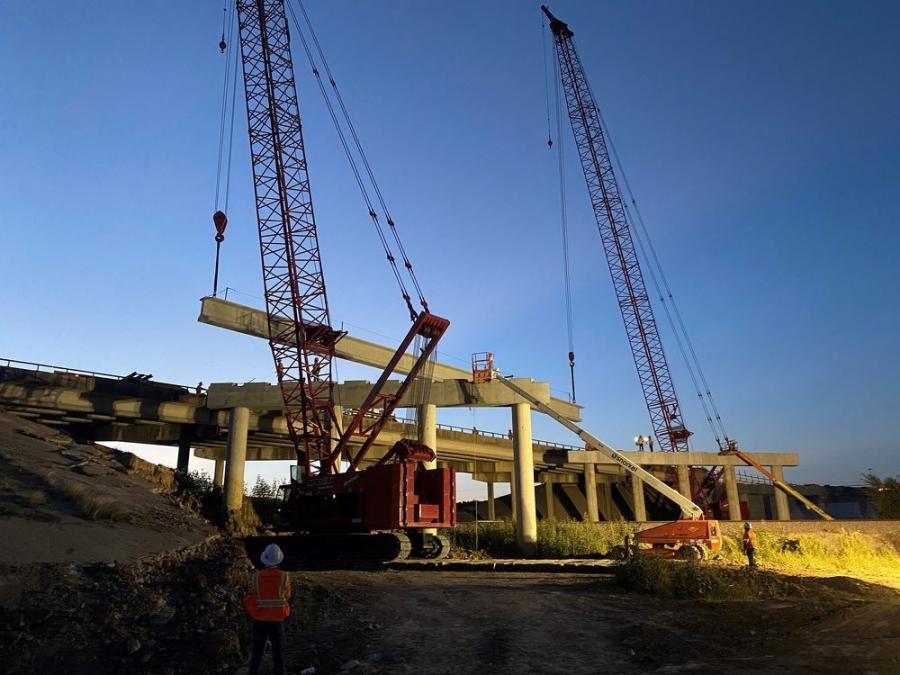 A unique construction material is the replacement of a Type D hot mix for the 2-in. asphalt overlay with SAC-A Superpave type C mix.

Construction of the $177 million, I-820 East Loop project in the Greater Fort Worth Area has made significant progress since the project broke ground in late July 2018 as part of the state's Texas Clear Lanes initiative to alleviate traffic congestion in a heavily traveled part of the Dallas-Fort Worth roadway system.

Flatiron, awarded the contract in early 2018, is expecting to achieve substantial completion in March 2022.

The widening covers the north and southbound directions of I-820 and the east and westbound directions of SH 121. The 15 new bridges, including the direct connect ramps — 1 mi. in length, will eliminate the previous interchanges, which were deemed to be more complex and time-consuming to maneuver. The bridge construction translates into one million sq. ft. of bridge deck and 140,000 linear ft. of concrete girders.

The new road and bridge infrastructure was designed by Jacobs Engineering Group.

"Clear Lane projects often have features that make straight-forward, flow-and-go construction a bit more difficult," said Flatiron project manager Jeremiah Beiter. "Our major constraints here are the existing highways that are heavily trafficked. This is phased construction — we have five phases, and each one has two stages and each stage has one to three steps. The southern end of the project crosses over a large and a small lake and the Trinity River, and in the middle of the work area is Trinity Rail Expressway, a commuter railway. Four of our bridges cross the rail lines and we needed to design features that deal with rail traffic. 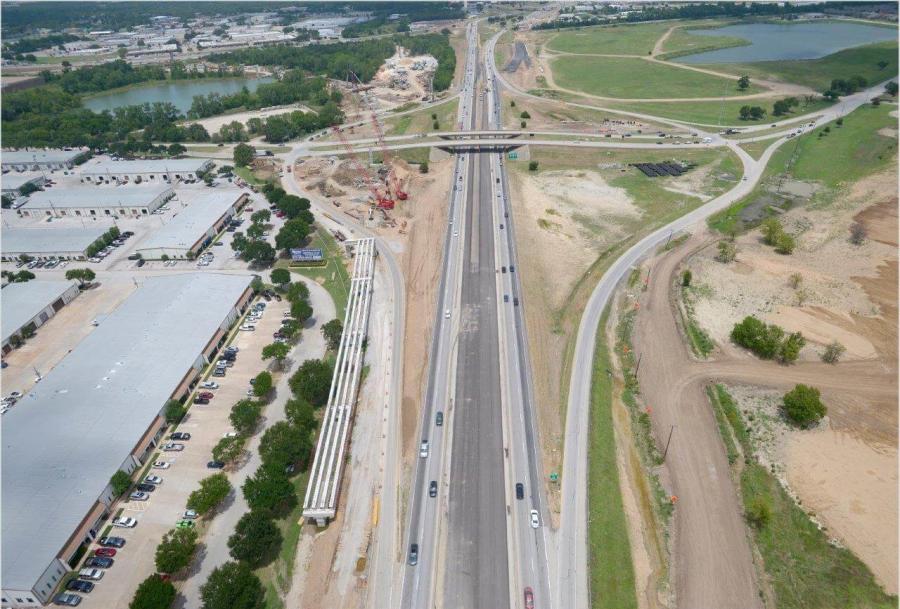 "Like all railroads, they come with their interesting aspects," he added. "They have been a good partner and are as forthcoming as they can be. There has been a lot of engineering coordination from our in-house engineers, the TRE and the Symons Form Group, getting their approvals to making sure that everything is correct."

A unique construction material is the replacement of a Type D hot mix for the 2-in. asphalt overlay with SAC-A Superpave type C mix.

"Historically in this area they've used a Type D mix, which had mixed results," said Beiter. "Hopefully the new mix will extend the life of the highway."

The design is based on maximizing traffic while the construction proceeds. The area is home to some major businesses such as Bell Helicopter, and I-820 is a popular alternative route for people attending NASCAR events, other sports events and festivals.

The project required approximately 23 acres of additional right-of-way and approximately 0.03 acre of drainage easement, as well as several million dollars to cover the cost of utility adjustments and relocations. Road reconstruction is proceeding according to plan.

"We've had anywhere from three to 10 earth work crews doing subgrade improvements, embankments; excavating for structures; grading and placing cement and lime-treated grading; placing rip rap, and creating drainage lines for public works," said Beiter. "This is a standard driven job, so you structure your work following completed areas — it keeps crews productive without having too much lag time." 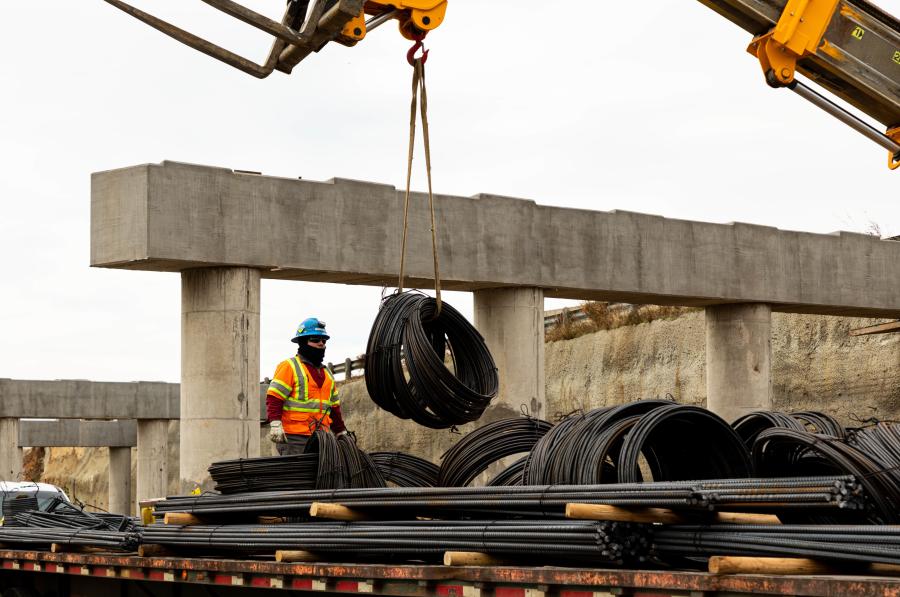 When needed, crews from nearby Flatiron projects are brought in to assist and additional personnel are added to the project.

"A lot of the road work is either in the median of the highways or widening on the outside," said Beiter. "On I-820, our first operations were in the median and are now widening the outside shoulders. There have been no major challenges, but with any rehabilitation job, you'll uncover things that are not in the plans, like cutting into an area that should be four inches thick and is two feet think. With the south end being close to the river and lakes, the early excavation to establish the walls and bridge work encountered a lot of water. We had to be creative on how we accessed that area and de-watered it for various construction activities."

The drainage infrastructure includes 6,000 ft. box culverts, around 23,000 ft. of pipe, and approximately 300 structures such as manholes.

"We're installing this infrastructure as the roads are built," said Beiter.

"To minimize the risk of project delays, we brought in the plant to allow workers to batch concrete onsite, alleviating the need for materials to be trucked through an already congested corridor," said Nick Polce, Flatiron's vice president for Texas. "Flatiron will ultimately batch 126,000 cubic yards at the site."

This helps during rush hours and avoids having to coordinate work with delivery times.

Flatiron is self-performing all of the earth work, concrete paving, bridge substructure and superstructure work.

"We're about half-way through the construction," said Beiter. "We haven't finished one bridge yet, but have completed a large majority of all of them. We've completed two traffic switches on SH 121, which provides new widening and access points for the direct-connector bridges to tie into, 11 MSE walls, and about half of the 30,000 linear feet of drainage infrastructure to help with the water inundation that the area has experienced on the frontage roads. 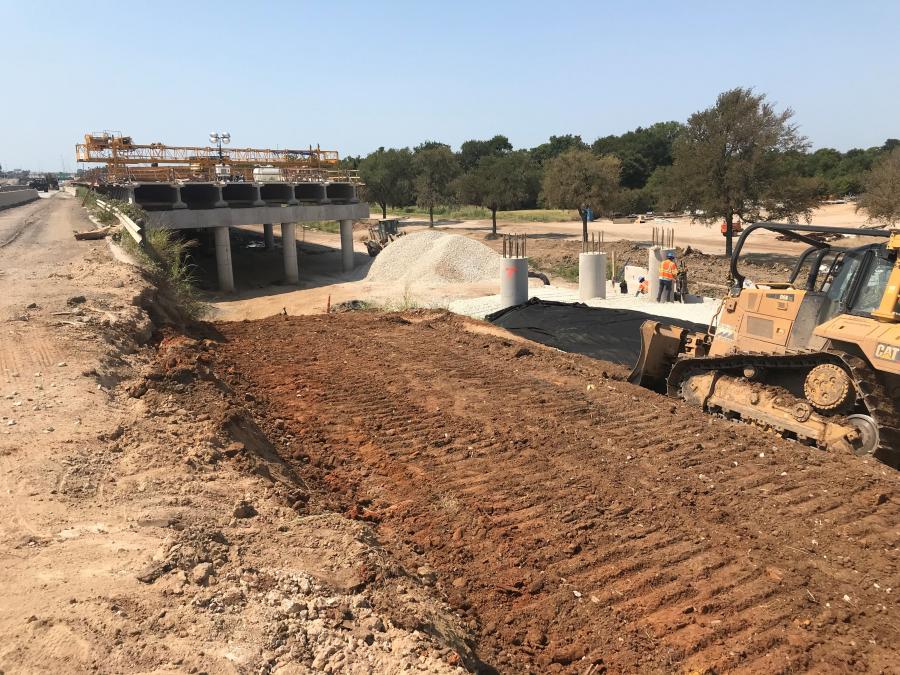 "Over the next 12 months we'll complete the opening of the first direct connector, which is scheduled for later this year — opening SH 121 eastbound to I-820 southbound," he added. "We're also building two general purpose bridges for I-820 southbound that the director connector ties into."

"They have their own set of challenges, which required us to be adaptable with TxDOT and re-sequence some out work to them out," said Beiter. "We're responsible for keeping the traveling public safe in our work zone and phased construction requires narrowing lanes and creating different traffic patterns that people are not used to. That leads to accidents unfortunately, but our crews are very diligent in providing as much assistance as possible and to keep the roadways clear to keep traffic moving."

There have been numerous night shifts and crews are working at multiple sites.

"It's all about logistics and having clear work plans, thinking through the entire lifecycle of a particular task from engineered plans to getting them into the hands of the workers, knowing what is critical to quality control checks so that you're not putting good work on top of bad work. Communication is paramount and we choose our foremen carefully, giving them a lot of training and guidance to help them with their tasks. We have field engineers that follow-up to  help manage the work and be extra sets of eyes and ears."

Assembling equipment and materials at each site quickens construction start times, and weekly meetings to discuss upcoming work is crucial to meeting deadlines. The work zones range from being tight — close to businesses — to having ample spaces via TxDOT right-of-ways.

"Each location and each phase has its own advantages and disadvantages," said Beiter. 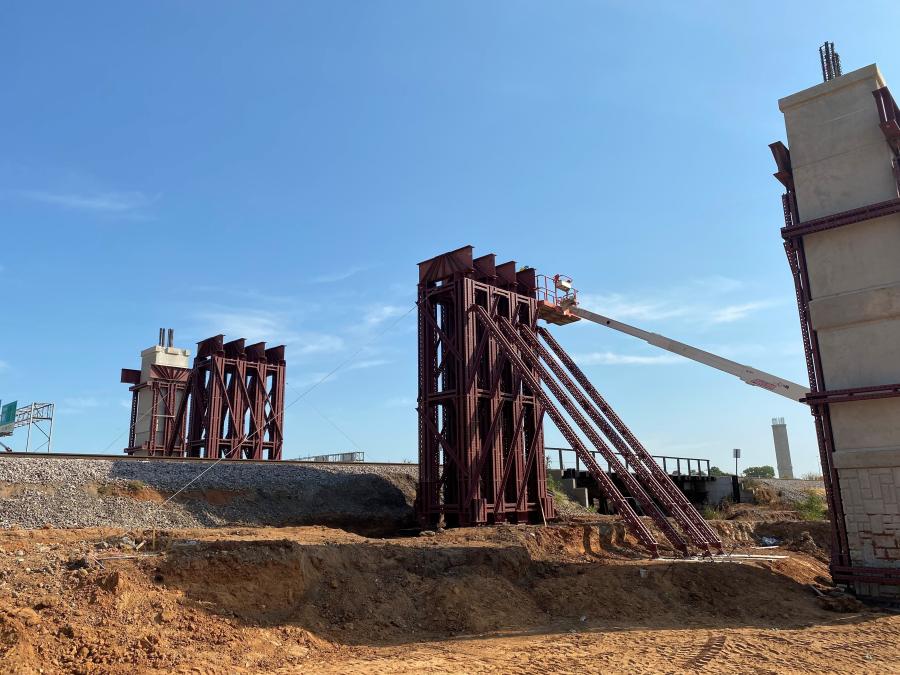 Many of the bridges are similar in design and length.

"They all utilize drill shaft foundations and concrete substructures — the main differences are span length or overall length," said Beiter. "Our northwest direct connector has the longest spans at and they use steel I-girders. The others use pre-stressed concrete beams with typical sizes of TX 54s. For the smaller bridges, we're using TX 28s. Our largest beams are TX 70s that are roughly 160-feet long. The beams are sitting on substructures, and we have round columns and rectangular columns.

"Most of our rectangular columns have aesthetic features and we have Fitzgerald form wires to provide them," he added. "The caps are designed based on the nature of the span lengths and weights coming in, so we have IT caps, hammerheads, trial caps and post-tensioned caps. TxDOT considered the visual aesthetics, creating a better environment for future developments."

Working on many bridges simultaneously has allowed Flatiron to identify efficient sequences, including the scheduling of similar form work that has crews performing the same tasks.

"Our crews are learning better practices from lessons learned and benefit from early efforts," said Beiter. "They are very familiar with the steps and how parts and pieces come together. We have faster turnaround times."

"As part of the Texas Clear Lanes initiative, TxDOT secured congestion relief funding for a segment of the I-820 East Loop from SH 121/183 to Randol Mill Road," states the project web page. "This interim four-mile project will add one mainlane [in] each direction, replace bridges for SH 10 and the Trinity River, and construct direct connect ramps to/from SH 121."

"The existing I-820 and SH 121 facilities have not been updated to current highway design standards," stated a TxDOT document, "and the facilities, including bridge and pavement structures, were designed and constructed for much less traffic than is currently using the roadways."

Discussion and planning for the project dates back to 1992.

"[The goals] are to reduce traffic congestion on existing roadways and provide a safer, more convenient route for traveling through the area," stated a TxDOT public consultation document. "[It will also] increase mobility and provide access, including improved emergency service access to the area. Constructing an interchange at I-820/SH 121 will provide full directional connectivity between these two major highways."

The traffic management plan is based on ongoing lane closures, detours, and new traffic configurations.

"We have a restrictive schedule when we can restrict additional lanes," said Beiter. "We try to minimize any traffic impacts. TxDOT has initiated a Q Management system that has a series of radar detectors and message boards to notify motorists what to expect in the next few miles of traffic. This helps to minimize back up, accidents and high-speed collisions."

"Everyone is dedicated to this project and you see a lot of people coming together whatever they can to help us keep moving," said Beiter. "We have a great set of workers, with a lot of focus on quality and safety. You don't see the little errors that occur with inexperienced crews. Safety Manager Charles Troglen joined us back in January and he's been a big help in developing and maintaining our safety culture here. The guys are excited to talk to him and he's proactive when it comes to safety."

Peak days can see up to 180 Flatiron and subcontractor workers on-site. The major subcontractors are ATS Drilling for drill shafts and foundations; Oscar Orduno for temporary shoring; Premier Paving for form work; Paniolo for flatwork, driveways, rip rap and curbs; W.O.E. for slip work on all the bridge rail (SSTR and C402); Venus Construction for water and waste water utility work; and Mica for ITS, electrical and lighting.

The excavation and demolition will garner a large amount concrete, rebar and asphalt.

"We use the millings for our hollow roads and access points," said Beiter. "Some of the concrete is being used for temporary backfill and for a future phase. We're looking at potentially setting up a crusher to produce more recycled concrete for our paving operations. We have agreements with some local property owners that have plans for future developments that will require clean fill. We're reducing our carbon footprint by trucking less materials."

"We have a mechanic that that floats across various projects," said Beiter. "Anything we do in-house can be turned around pretty quickly. We also have a lube truck — we brought it in recently and it's cut down on maintenance and helped keep machines running by and greasing different pivot pins and fueling vehicles. Our mechanic services a lot of small engines and we keep parts on hand for that. The hardest thing to keep running is the trucks that are putting in a lot of miles."