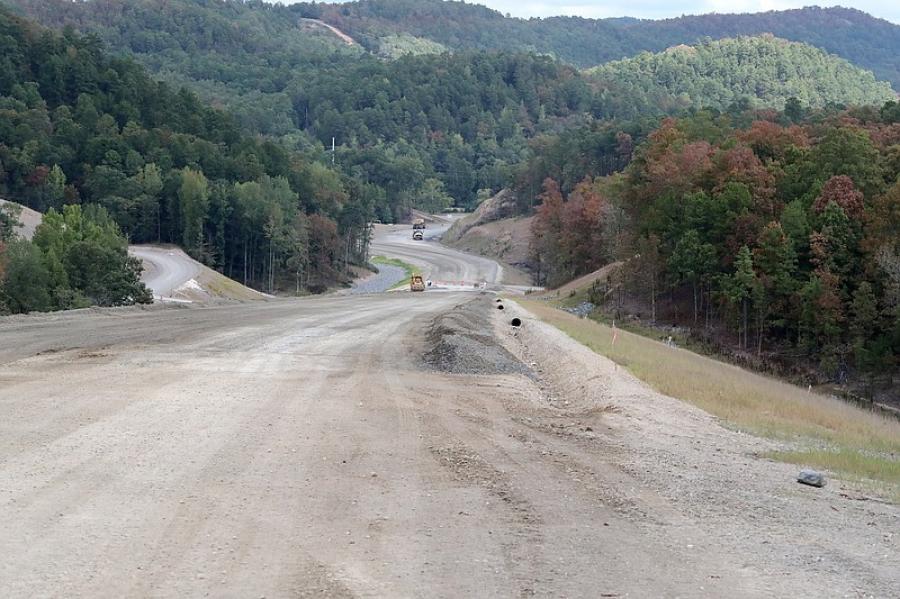 Construction work is shown on the King Expressway extension in September 2021. (Photo courtesy of The Sentinel-Record)

A faulty retaining wall has delayed completion of the 5.8-mi.-long extension of the King Expressway, the Arkansas Department of Transportation (ArDOT) announced.

The transportation agency told the Hot Springs Sentinel-Record in November that the $80.14 million project connecting the U.S. Highway 70 East interchange to the intersection junction of Arkansas Highway 5 and Ark. 7 was ahead of schedule.

McGeorge Contracting in Little Rock was on pace to finish the roadwork before the August 2022 date projected when construction began in late 2019.

But an error discovered after the retaining wall was built for the Mill Creek Road bridge has upended that timeline, the newspaper learned, pushing the end of construction into the fall.

"The project delay has been in trying to engineer a suitable solution that would not require substantial removal of the as-constructed wall or much of the fill behind it," ArDOT Public Information Officer Dave Parker said in an email to the Sentinel-Record.

He explained that ArDOT's bridge division sent the maker of the mechanically stabilized earth (MSE) retaining wall incorrect elevations for the top of the wall, making it too short.

"This was not caught until the wall panels were erected and the fill was placed behind the walls," he said. "The walls are provided in panels that are stacked on top of each other with reinforcing strips going back behind the wall."

In his email to the Hot Springs news source, Parker added, "To my knowledge, erosion has not been an issue. It is more of [a problem] of having too steep of a slope behind the wall to be able to maintain the slope and prevent long-term issues."

The Sentinel-Record reported May 18 that change orders have increased the project cost by 7 percent over the $75.15 million contract McGeorge was awarded in November 2019. The updated cost of more than $80 million does not include the MSE wall change order, which ArDOT said has yet to be completed.

Garland County contributed to the King Expressway extension project, pledging $30 million from the $54.7 million bond issue voters authorized in a June 2016 special election. The ballot title they endorsed by an almost two-to-one margin reauthorized a 0.625 percent countywide sales tax to secure the debt.

Last fall, ArDOT said the two-lane highway through the rugged backcountry east of Hot Springs National Park will cut travel time in half between the city of Hot Springs and Hot Springs Village.