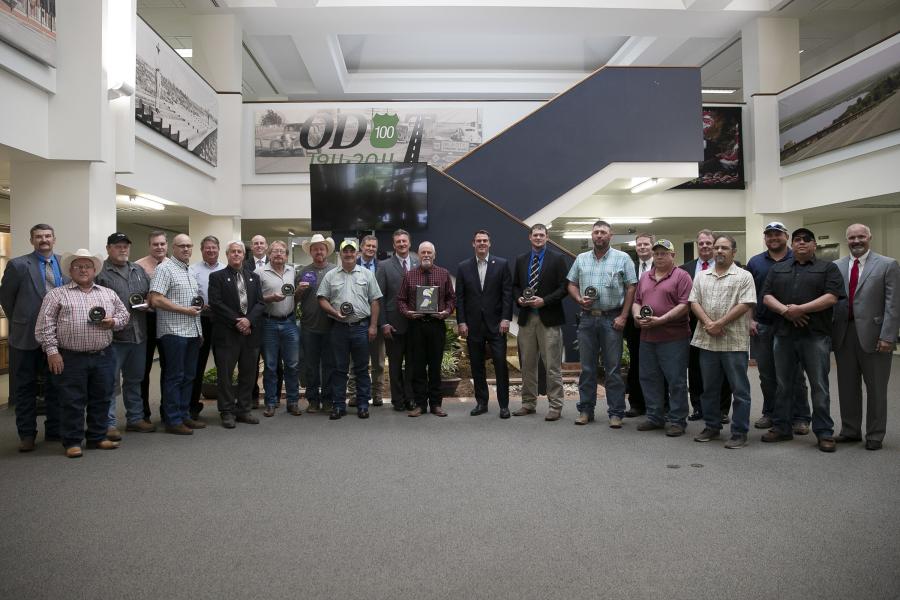 At the June 3 OTC meeting , Gov. Kevin Stitt and Secretary of Transportation and Oklahoma Department of Transportation Executive Director Tim Gatz congratulated the ODOT division and crews with the best safety records from the past year.

Highlights of the Oklahoma Transportation Commission's June 3 meeting include a special presentation with Gov. Kevin Stitt congratulating Oklahoma Department of Transportation crews for workplace safety, presentation of an award for ODOT's public transit program and recognition of an Oklahoma Department of Public Safety employee by ODOT. Extensive updates were provided on the department's ongoing response to the flooding emergency and the recently-approved state budget. Contracts were awarded for major projects on I-35 in McClain County, I-40 in Sequoyah County and U.S.-60 in Washington County.

In a special presentation, Gov. Stitt and Secretary of Transportation and ODOT Executive Director Tim Gatz helped present the department's annual safety awards to the divisions and crews with the best safety records in the past year. Stitt expressed his appreciation to ODOT crews for their commitment to the safety of the traveling public and for working around-the-clock during transportation emergencies and inclement weather.

An Excellence in FTA Program Management award from the Federal Transit Administration was presented to ODOT's Transit Programs Division and ODOT presented a commendation to Melodie Luke-Coleman with the Oklahoma Department of Public Safety for her work to permit and route commercial trucks through the state.

Gatz briefed the commission on ODOT's response to the historic flooding emergency in parts of northern and eastern Oklahoma and its impact on roads, including possible damage, worsening pavement conditions and construction delays. He noted that 150 highway closures in 38 counties occurred due to flooding or storm damage since mid-April, with as many as 60 or more closed at one time.

Record rainfall resulted in catastrophic flooding along the Arkansas River basin, inundating and cutting off communities such as Miami, Muskogee, Fort Gibson, Braggs and Webbers Falls. In addition to barricading flooded highways, ODOT workers were able to assist with rapid construction of a road for emergency and utility vehicles to reach Braggs. The agency worked with many partners who made resources available, such as Union Pacific Railroad, to deliver critical supplies to the town.

Commissioners voted to award contracts for a $9 million ramp improvement project on I-35 at Ladd Road near Goldsby, a nearly $36 million project to rehabilitate 6.5 miles of I-40 near Vian and a nearly $16 million highway reconstruction project on U.S.-60 near Bartlesville. They also awarded contracts for resurfacing on U.S.-287 near Boise City, I-35 near Wynnewood and U.S.-69 near Checotah.

The nine-member Oklahoma Transportation Commission, appointed by the governor and legislative leadership to oversee the state's transportation development, awards contracts every month for road and bridge construction. Contracts, bid information, the commission's monthly agenda and project details can be viewed at www.odot.org.