The view at the popular Strawberry Festival is about to get a lot better. 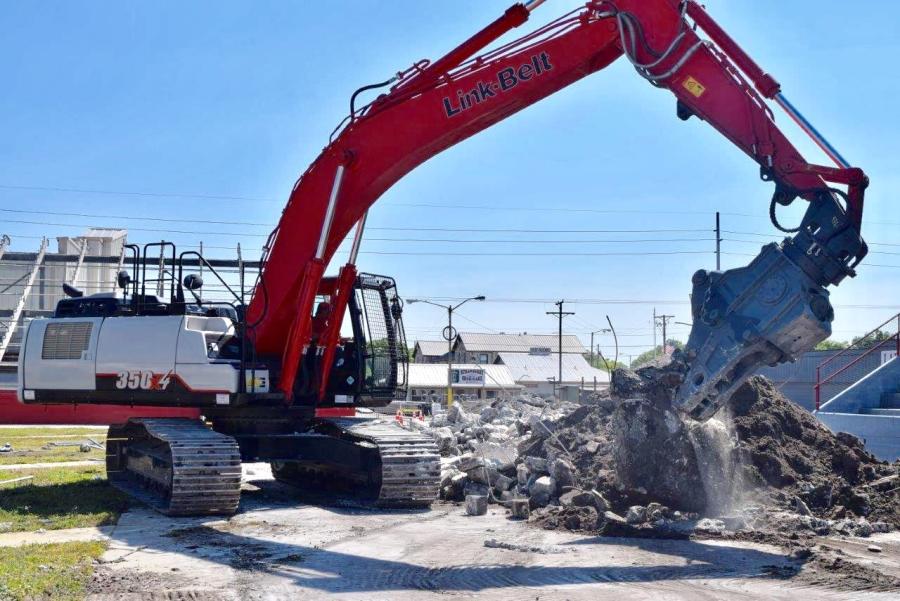 The view at the popular Strawberry Festival is about to get a lot better.

Major improvements are in the works at the concert venue for the long-running event in Plant City, Fla. This year's festival recently concluded and saw more than 500,000 people converge for the state's largest agricultural festival. To say that the event has expanded over the years since its inception in 1930 is an understatement: today, it now features at least two musical acts a day for the 11-day run.

The venue's main concrete grandstand, built in 1953 and opened two years later as part of the William Schneider Memorial Stadium, is being demolished to make way for new seating that will increase capacity from 3,500 spectators to 11,000. The new venue will feature aluminum bleacher-style seating set up in a crescent shape in front of the stage to provide a more intimate and enjoyable experience for the festival's music lovers. In addition, a new vendor's building will be constructed to complement the current work with completion slated for November 2017.

The grandstand, originally part of the high school football stadium for Plant City High School, had become insufficient to accommodate the ever-increasing number of festival attendees, and eventually the high school re-located to Raider Place, a few miles away.

Wetherington Tractor Service (WTS) was contracted to demolish the concrete grandstand and two additional metal grandstands, totaling approximately 2,000 tons (1,814 t) of concrete and metal. Work started March 13, the day after the festival's conclusion, with the disassembling of the metal bleachers before the demolition of the existing stand itself could begin on March 21.

The initial phase of the project has been completed with the grandstand structure completely razed. Demolition debris is being hauled to WTS's yard 3 mi. away in roughly 200 loads using five Sterling dump trucks. Once there, it will be crushed for road base by PV Crushing, a subcontractor based in Lakeland, Fla.

Proximity of certain structures to the grandstand meant demolition planning was key.

“This project was challenging in the fact that the stadium is 50 feet tall at the back, top edge of the seating and is situated only 10 feet from the building behind it, so we had to be very careful that nothing fell on it,” said WTS owner Kimball Wetherington. “We did that by securing a lot of it with cables and the other excavators while the shear was taking the top part down.”

Equipment on the Job

James Surrency, who oversees a team of five men at the job site as superintendent and a stalwart of WTS since 2002, said the Kinshofer combi jaw processor is “perfect for the job because 95 percent of what we're digging is concrete.”

Getting the right equipment for the job was part of a detailed planning process that WTS undertook.

“I actually started looking at this project for the festival and analyzing the feasibility and cost of taking a stadium down about three years ago,” said Wetherington.

“I called Bruce and told him what we were doing and they actually put the package together and recommended the Kinshofer shear,” said Wetherington. “I had given Bruce a date of March 20 [to begin actual demolition] as the day I needed to be on the site, about six months ago, and they got the machine and the shear in their shop and put it together about a month and a half ago, so that it would be ready to go. That was key as this is a very time sensitive project given what needs to happen after the demolition stage.”

The relationship between WTS and GSE spans 25 years, beginning when Wetherington's business acquired its underground utilities license and was able to invest in new equipment purchases. Until then, WTS had used only rented machines.

“We probably have about 15 machines in the fleet right now that we've bought from Great Southern with quite a few sold through them too since we started doing business with them. They understand that downtime is money, so if you've got a problem on site [with a machine], they're very quick to respond.”

Surrency agreed, saying GSE's product support and customer service has contributed to WTS's “great, long-term relationship” with the equipment dealer, and added that GSE sales representative Bruce Bowers has been an integral part of that relationship, calling him, “highly dependable.”

“We'll also do everything from the clearing through the asphalt paving and the curbing,” Wetherington said. “The only thing left to do at the site when we're done will be irrigation and landscaping, but we'll do every phase in between.”

Kimball Wetherington has been a supporter of the Strawberry Festival for many years.

“I've been personally involved for about 25 years,” he said. “We've always supported youth, for example, by purchasing steers at the steers show each year and I've done most of the site work and demolition for them [Strawberry Festival] for about 20 years.”

Wetherington is pleased that his firm is doing its part to ensure the future success of the festival. That once even included keeping the festival accessible for visitors when a huge rainstorm rendered the grass fields used as parking lots, west of the venue, completely unusable.

“We sent some teams to help out by working on the fields through the night and by the next morning people were able to use them again,” he said. “It was a long night, six or seven of our guys graded about 40 acres in all and then hauled 40 loads of millings in to get the lots stabilized and ready for use.”

Once the demolition debris is completely hauled away, some work will remain for WTS.

WTS — Busy in the Sunshine State

Kimball Wetherington started WTS in 1985 doing clean up and grade work for contractors in the Plant City area. Opportunities in the site development business opened up thereafter and coupled with the acquisition of an underground utilities license in 1990, the company expanded to include all phases of utility infrastructure, site development and trucking. Today, WTS has 70 employees working on projects that include site clearing, underground utilities, demolition, site excavation, construction subdivisions, commercial developments and roadway construction. In addition, the trucking division provides: importing/exporting fill, hauling of aggregate materials, asphalt hauling and 20 to 40 yard roll off dumpsters.

Currently, WTS is busy working on several projects in Florida, including site work and underground utilities for Northside Hospital and Taco Bell in St. Petersburg and Bradenton, respectively. Closer to home, the firm is working on the building of a new complex south of Plant City for the First Baptist Church and also the construction of a new storage facility for Florida Cold Storage.

Charitable work is part of the WTS ethos, as well: the company recently carried out some pro bono site and infrastructure work for the Plant City Pregnancy Care and the company provides dumpsters and other material when asked on occasions by organizations in the area.

Amid all of his company's success, Wetherington remains humble and thankful for not just projects like Strawberry Festival and the slew of other work WTS does, but also for just having the opportunity to do the work at all.

“I was a young man who thought he could make a living with just a grade tractor,” he said. “Somehow it's grown to what it is today.”

Great Southern Equipment Company, (GSE), was founded by Ray Ferwerda Sr. 50 years ago when he saw an opportunity to fuel Florida's infrastructure expansion by providing construction and roadbuilding equipment, parts and service. His son, Ray Ferwerda Jr., runs the business today which has six locations throughout the state. From selling the country's first Gradall machines and recently being appointed its state-wide dealer, equipment lines have expanded over the years to include brands such as KCM, Kobelco, Link-Belt, Gradall, Vacall, Sakai, Kaiser, Stewart-Amos, Kinshofer and Sennebogen.—CEG