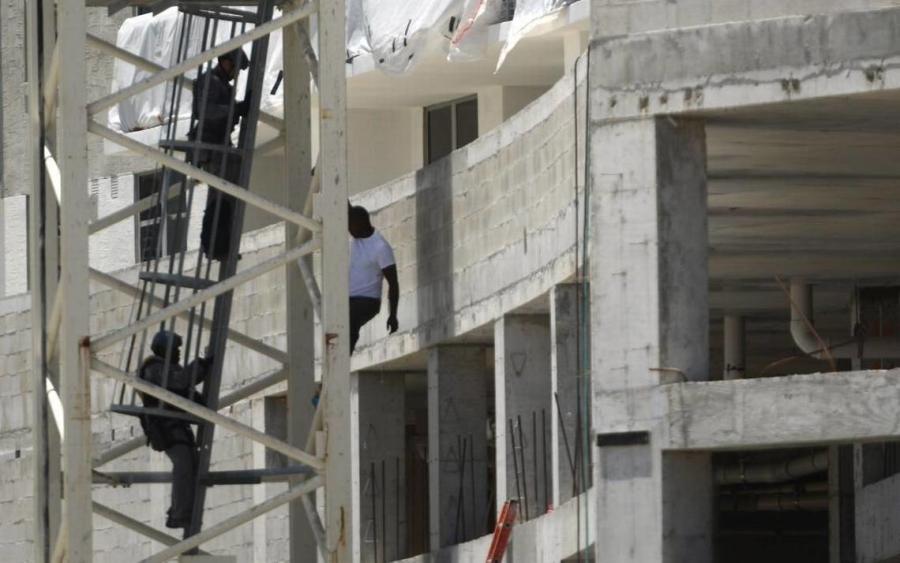 Police said Bray was about 200 feet in the air before he made his way to the roof of the building, ignoring officers' requests to come down. (Photo Credit: Joe Cavaretta, Sun Sentinel)

A man barricaded himself on the roof of a building under construction in Downtown Hollywood, Fla. and began throwing debris to the ground, Sunday morning, authorities said.

According to Hollywood Police, they began to receive calls from concerned residents that someone was yelling in Hollywood's Young Circle, Sunday, at around 3:45 a.m.

Responding officers made contact with 27-year-old Travis Bernard Bray, who had climbed inside a 300-foot, 25-story crane at the new building, located near Federal Highway, across from the Radius condominium.

Bray had no cell phone, so officers communicated by shouting.

Police said Bray was about 200 feet in the air before he made his way to the roof of the building, ignoring officers' requests to come down.

Bray remained on the roof of the building and continued to throw debris on to the street, including weights used to counter-balance the crane, some weighing as much as 100 pounds.

“Oh, they were very loud,” said business owner Jerry Muller, “and I saw several of them he threw down — they were like heavy, heavy metal things.”

“Not only can he hurt himself, he can hurt others, and it's crazy,” said witness Judy Osario.

7News cameras captured Bray as he threw items off the roof, shirtless. Sometimes, though, he would just sit.

10 hours went by. At one point, police hoisted a bag of clothes and food up to the perch.

“He was throwing stuff down and everything. He looked messed up — sweaty, hot,” said witness Nicole. “The sun's beating up there. He was on top of the thing, so the sun is shining, you know, so he's tired.”

Bray's mother used a megaphone to beg her son to come down from the crane. “We will get through this together, Travis,” she said. “You are not alone. Come down, baby.”

Video from the Sun-Sentinel showed Bray finally making it to the second floor, but police said they had to use a Taser to get him to the ground.

Bray was taken into custody. He was taken to the hospital for evaluation, and then to the Broward County Jail.