For Vermont's Classen Crane Service, Business Is Booming — So Is Its Fleet 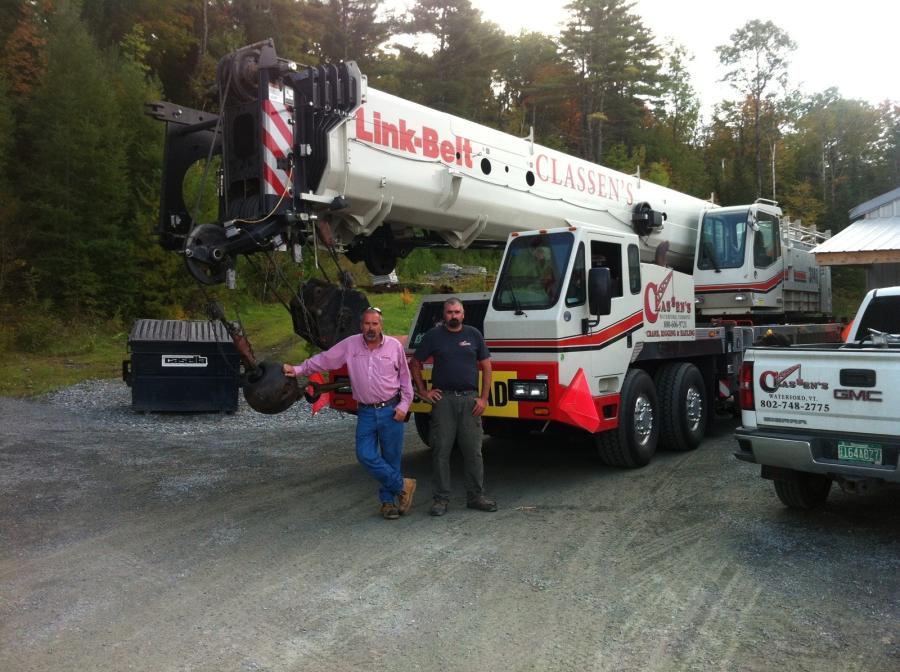 In 2009, Mike Classen, founder of Classen's Crane Service in Waterford, Vt., told Construction Equipment Guide (CEG), “To tell you the truth, if I did not listen to the news each night, I would not know that New England is dealing with an economic slowdown. Our business has remained quite strong.”

The article, in which Classen said this, titled, “Vermont's Classen's Crane Service Evades Economic Slowdown,” was published a year into the deepest recession of the country had experienced in generations: segments of the construction industry were in shambles.

Classen had founded his business in 1993 and had grown his operation consistently each year. His crane service was being used in commercial and residential construction projects, including steel erection, timber framework, log homes, modular homes, precast concrete, and rigging projects of all shapes and sizes. In addition to his booming business in northern New England, Classen had engaged in projects up and down the east coast, including the construction of 21 homes on Block Island (just outside of Rhode Island) and a major post and beam project in Augusta, Ga.

Fast forward to 2017: CEG caught up with Mike Classen once again at a job he was on at the Mountain View Grand Resort and Spa. The Mountain View is a world-famous destination resort nestled in the White Mountains of New Hampshire and boasts a spectacular view of Mount Washington. In continuous operation since the 1800s, the historic hotel is noted for its five-star accommodations, golf course, tennis courts, indoor and outdoor swimming pools, bocce ball, and even more amenities.

The sprawling five-story facility is installing a new roof and Classen is excited to be a part of it.

“This is one of my favorite spots in all of New England,” he said. “I love bringing friends and family over here just to absorb the atmosphere. It's quite an honor to be involved in lifting the roofing materials up to the roofing crews.”

Classen spoke of his company's sustained growth since 2009.

“We have been privileged to continue to grow year after year and be involved in some great projects,” he said. “We worked for a year at Fort Drum in Watertown, N.Y., with our Link-Belt HTC 3140. We were essentially erecting hangers for Apache helicopters. The trusses weighed 72,000 pounds each.

“Four years ago, we worked with Reed and Reed on one of their windfarm projects on Lowell Mountain in Vermont. We were the topping-out crew, which meant that we were involved in the placement of the turbines on the top of the towers. We also worked on a windfarm with Reed and Reed in Searsburg, Vt.”

Classen attributes a lot of his company's success to his team.

“We have great guys both on the ground and in the operator seat,” he said. “These guys have been with me for a long time. They know how to work with our customers; they know how to work hard; they show up every time; and their skillsets grow the longer they are with us. I believe I have the best operators in all of New England. They are smooth, safe, and understand the crane chart completely.”

“We do a lot of work for General Electric doing installations in their industrial plants,” he said. “We are moving and installing multi-million dollar pieces of equipment for GE. Our relationship is strong and they keep coming back. Everyone on our team is certified for the jobs that they do. We don't cut any corners.”

Another positive development for Classen's Crane Service is that Ben Classen (Mike's 36-year-old son) is now a company vice president.

“Ben [Classen] grew up in this business and he knows every aspect of it inside and out. Today Ben is really helping manage the company. He looks after all day to day operations, scheduling, and bidding a lot of our work. It's getting to the point where he is doing more work than I do.”

“We stay with a late model fleet primarily for two reasons,” said Mike Classen. “One … reliability. Cranes do have the tendency to last a very long time, but we work in very isolated parts of New England and we don't want to take any chances. The second reason is presentation … we are handling some very expensive materials for our customers. I want them to look at our cranes and have the confidence that we know what we are doing and that our equipment is up to the task.”

The Link-Belt HTC 3140 140-ton truck crane is a bit of an exception to Classen's policy concerning late model machines.

“We have had the HTC 3140 for two-and-a-half years and it has been bullet proof,” Classen said. “We were turning down some larger projects because we simply did not have the right crane for those jobs, or we were doing re-rents from other crane houses. Since we made this purchase, the 3140 has worked every single day. It has 195-feet of hydraulic boom and 60,000 pounds of counterweight. Over the road, it travels easily at 60 mph. It's a big crane capable of doing big jobs that easily transports in two loads; one is the transportation of the truck crane itself and another tractor trailer for the counterweights.”

“The cab tilts up to 20 degrees dramatically improving visibility and comfort,” he said. “The joystick controls are so easy even I can operate it.”

Almost Part of the Family

Classen's Crane Service has purchased all of its Link-Belt cranes from Woods CRW and Mike Classen has always worked with Chris Palmer. His first purchase was 24 years ago.

“We were both young men and I believe I was Chris's first sale,” he said. “I have purchased all of my Link-Belt cranes over the years from him … there have been at least 15 of them. I have often told Chris that he may have sold me my first Link-Belt, but it was Steve Smith in their service department who has sold me the rest. The Woods CRW support team is well trained by the factory and they typically know exactly how to address any issue that we may have. I can't tell you how many times we've had service technicians from Woods CRW make it out for a service call on a Saturday, and on a rare occasion, even on a Sunday.

Two years ago, Link-Belt invited Classen to tour its factory and Classen was very impressed with the engineering and manufacturing capabilities behind Link-Belt.

“Everyone in the factory was fully accessible to us,” he said. “The president of the company spent more time with me than I would have thought he could ever justify, and as we went down the assembly line, each technician took the time to explain to us exactly what he was doing. We reconnected with Link-Belt factory people at ConExpo. You would get the feeling that being a Link-Belt owner makes you a part of the Link-Belt family.”

With the length of the relationship, Woods CRW is virtually a part of our family, as well, Classen added.

“We have really enjoyed and appreciated watching them grow,” he said. “From one facility in Williston, Vt., they have grown to having locations in Worcester, Mass., and Carlisle, Pa. That played to our advantage not long ago when we needed service in a critical situation on a project in northern Vermont. No one was available to come to us immediately from Williston, so they immediately dispatched a service truck and technician from Worcester, Mass.”

Mike Classen is a grandfather, and like all good grandfathers, he can be found reading a really good bedtime story to his grandchildren. One of those stories for years has been. “Crandall the Crane,” written by Nancy Crosby.

Crandall the Crane's plot involves a grandfather who restores a dilapidated old crane that was sitting in a field for his grandchildren. This inspired Mike's grandchildren (Collin and Jayvon, both six) to find a Crandall in the form of a 1947 Unit crawler crane, now known simply as “Crandall,” which Classen is currently restoring. Upon completion, Crandall will be an operating crane that doubles as a tire swing.