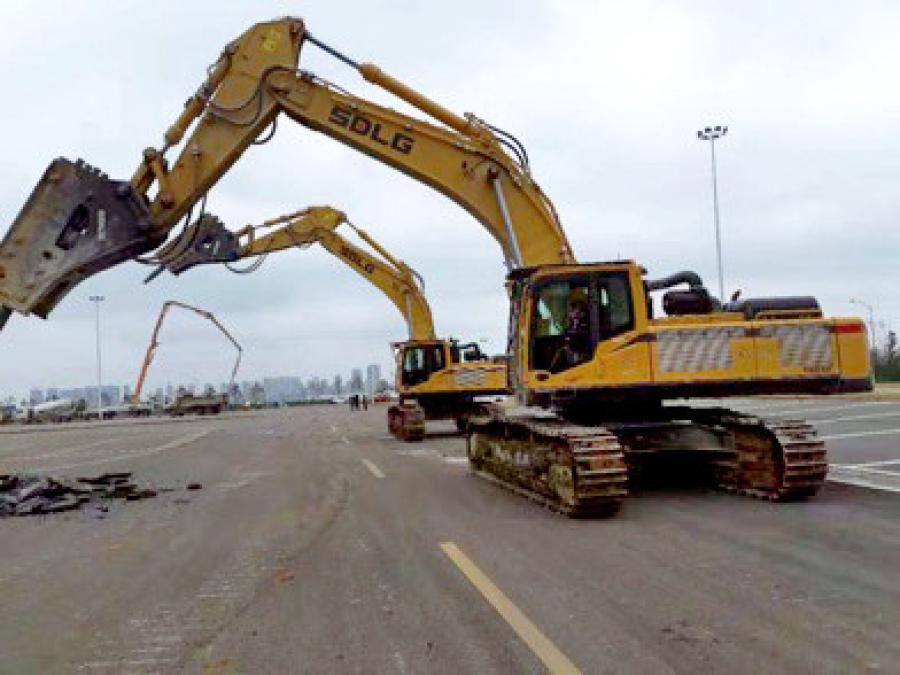 Four SDLG excavators — three E660FL and an E6500F — helped expedite construction of two hospitals in Wuhan, China, as part of the government's effort to treat patients with coronavirus infections and ease the shortage of hospital beds.

On Jan. 24, construction started on the Huoshenshan Hospital, on the outskirts of Wuhan city. Construction teams of some 7,000 workers, labored around the clock to complete the 1,000-bed complex, which will be used to house patients transferred from other facilities, according to the New York Times.

Three E660FL mini excavators were among the first machines onsite at the Huoshenshan Hospital construction site. Wuhan-based Guolei Construction Engineering Co. Ltd. deployed the three machines to the site in response to the government's call for construction support.

"Fortunately we had excavators around Wuhan, so I thought as long as I can afford to pay my operators, ensure they are safe, have a place to rest and eat, then it's the least I could do to help," said Dong Guoqiao, owner of Guolei Construction Engineering Co. Ltd. "It was an emergency situation, so we didn't even discuss payment. As a Wuhan citizen I am just glad that I can offer support wherever I can."

The three 6.6 ton (6 t)-rated E660FL mini excavators were on standby 24/7 and were used in areas inaccessible to larger machines to clear debris and provide general construction support. Powered by a 38.3 kW engine, the mini excavators have a bucket capacity of .28 cu. yd. (0.22 cu m).

Guoqiao said he was grateful that his local SDLG dealer delivered extra keys to the construction site so his operators could start the machines. Guoqiao had left the keys at his parent's house during an earlier visit and was unable to drive back there due to the lockdown in the city.

Wuhan, a city of 11 million people, has been on lock down since Jan. 23, as part of the government's effort to quarantine the epicenter of the coronavirus, which is also known as 2019-nCoV.

Over in another part of Wuhan, a 55 ton (50 t)-rated E6500F excavator worked 48 hours nonstop alongside other excavators to support the construction of the Leishenshan Hospital, which is expected to have 1,600 beds and be ready by Feb. 5.

Operator Huxin, who owns the E6500F, responded to the government's call for operators on Jan. 26 and worked on the second hospital site for two days straight. Huxin said the construction site initially only had some 2,500 workers but more arrived over the following days to lend their support.

"I purchased the E6500F two months ago for construction work and since then it has delivered excellent performance. I'm glad that I could offer my services in Wuhan's time of need," Huxin said.

Powered by a 245 kW engine, the E6500F has a bucket capacity of 3.6 cu. yd. (2.8 cu m) and was used to break ground on the Leishenshan Hospital site, which sits on a former parking lot. After working nonstop for 48 hours, Huxin is now back home safe and has quarantined himself as he monitors his temperature for signs of the coronavirus.

In addition to local Wuhan operators contributing their efforts, SDLG also has donated and delivered supplies to the city.