From Sandbox to Sinkhole: Old Friends, a Talbert Trailer and the Project of a Lifetime

All was quiet at the National Corvette Museum in Bowling Green, Ky., in the early hours of Feb. 12, 2014. That changed at 5:39 a.m. when museum employees responded to the burglar alarm. 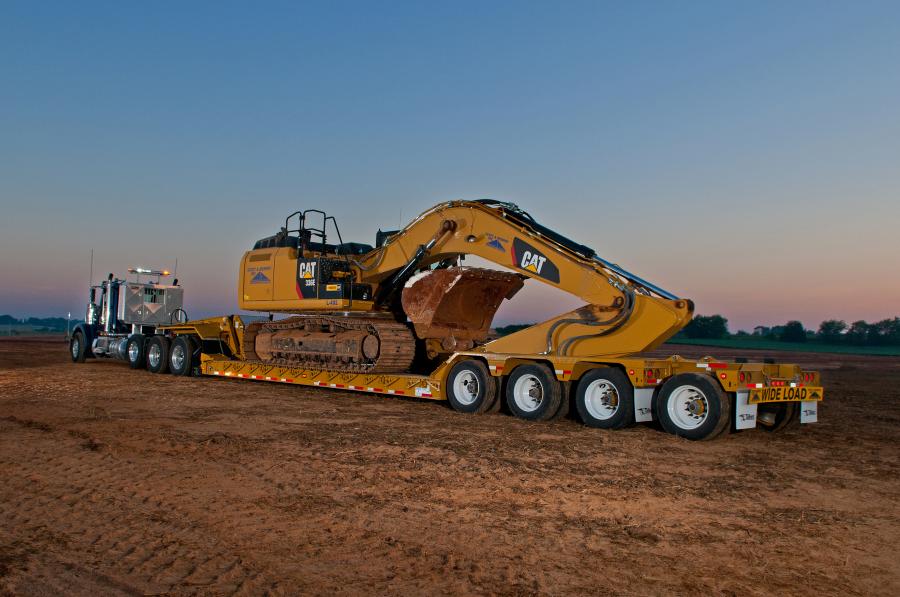 All was quiet at the National Corvette Museum in Bowling Green, Ky., in the early hours of Feb. 12, 2014. That changed at 5:39 a.m. when museum employees responded to the burglar alarm. What they found was worse than they could have imagined. Several cars were missing, but they weren't stolen by a group of thieves. The classic cars had been swallowed by a massive sinkhole.

Within an hour of the incident, Ben Baldock and his team of engineers found themselves staring down at a giant hole in the floor of the museum's 140-ft.-diameter Skydome, its largest display area. Baldock is the civil construction project manager of Scott & Murphy Inc., a regional contractor that does civil and concrete construction work for commercial, industrial and highway projects. The company's building division had previously constructed a 62,000-sq.-ft. expansion to another section of the museum, so Baldock was familiar with the building.

After only a few minutes, it was clear that securing the building and recovering the collectable Corvettes would be no easy feat. The sinkhole measured around 60 ft. wide and 60 ft. deep. In total, it swallowed eight cars with a combined value exceeding $1 million.

Between engineering, planning, organizing the manpower and transporting the heavy equipment, Baldock had his hands full. Fortunately, a recent addition to Scott & Murphy's extensive fleet of equipment would make coordinating this job a lot easier. A few days earlier, Baldock had received a new custom trailer from Talbert Manufacturing that he had ordered with a little help from an old friend.

Seven hours south of Bowling Green in Dothan, Ala., Kytes Shockey is a sales associate of Truckworx Kenworth, a Talbert dealer.

Growing up in Bowling Green, Shockey and Baldock were the best of friends. They played together, pushing dirt with toy trucks and riding 4-wheelers once they were old enough. They even set aside their ongoing Chevy versus Ford debate long enough to tour the National Corvette Museum together. But as is often the case for childhood friends, they had to part ways when Shockey moved away.

They stayed in touch as the years passed, and hung out when they could. The reunions became less and less frequent as they got older. They still got to see each other at least once a year and, of course, they attended each others' weddings. They even worked in similar industries, but they never had the chance to work together, until late 2013.

For months, Baldock had been thinking about purchasing another trailer. Scott & Murphy already owned a Talbert trailer that it bought new in 1988 and still used every day. Even after 2 million miles the trailer was performing great, but the company was ready for a new one that could provide the higher capacity and versatility needed to haul a wide range of equipment.

“We have a diverse fleet of more than 100 machines ranging from rubber-tire backhoes to 110-ton crawler cranes,” Baldock said. “We wanted a trailer that could haul our large pieces of equipment, but still move our smaller pieces efficiently.”

He knew a Talbert trailer would provide durability that Scott & Murphy could depend on for years to come. He was ready to order a new one, and he knew exactly who to call.

“Ben called me up and asked if I could get him a quote on a Talbert trailer,” Shockey said. “I was happy to help him out. We've known each other since kindergarten, but this was the first time we've been able to work together.”

Shockey had sold several Talbert trailers himself and was familiar with their quality. He knew his friend was making a good investment.

“I always recommend Talbert trailers because they're so well built,” he said. “The quality of steel, the workmanship, the welds — they take pride in their work. When Talbert builds you something, it's right.”

The friends began discussing options and features that would work best for Scott & Murphy. They found several upgrades that would make the trailer more safe, versatile and durable. Baldock chose a multiple kingpin setting that allows the operator to shorten the kingpin-to-rear-axle dimension so the trailer would be compliant with requirements in different states. He also added gooseneck fenders and load-bearing wheel covers to protect the payload from rocks or debris kicked up by truck and trailer tires. To increase operator safety when loading equipment, Baldock opted for strobe lights with a battery backup that keeps the lights flashing even when the gooseneck is removed. To top it off, Talbert agreed to paint the trailer to match Scott & Murphy's company colors.

“Talbert was extremely helpful,” Baldock said. “They worked with us over the phone almost every day for four weeks. The specifications were very detailed and they got it right.” Shockey agreed.

“At one point Ben called with a question. The president of Talbert called him back, and within 20 minutes, we had an answer,” he said. “It's not often that the president of a company emails or calls you.”

On Jan. 1, 2014, Scott & Murphy ordered a 55-ton (50 t) tri-axle trailer with a 26-ft. (7.9 m) long by 9-ft. (2.7 m) wide deck and pin-on fourth axle. The 26-ft.-long deck allows the company to haul as much as three smaller pieces of equipment at a time. The 9-ft.-wide deck offers greater stability for wider machines like articulated dump trucks, large excavators and cranes. Talbert manufactured the trailer to the exact specifications in just over a month. And luckily for Scott & Murphy, delivered it just days before the sinkhole collapsed.

With a brand-new Talbert trailer in its fleet, Scott & Murphy was ready to tackle the job. Retrieving classic Corvettes from a massive sinkhole inside a museum would be daunting in the best circumstances, but to add even more stress, the company had to work under the watchful eyes of the national news media.

“There was more media coverage on this than anything we've ever done,” Baldock said. “It was very nerve-wracking and made the job more challenging.”

Despite the increased pressure, the company got right to work. Before even thinking about the cars, Baldock and his team had to ensure the sinkhole wouldn't cause further damage to the building or endanger his crews. They drilled 30 micro piles around the perimeter of the building down to the bedrock to secure the foundation. They also drilled five more micro piles around the foundation of the tall spire in the center of the Skydome to ensure it would stay intact during the recovery process.

Once the building's foundation was secure, the company had to find a way to access the sinkhole with heavy equipment. Scott & Murphy's structural engineers designed a framework that allowed them to remove a column and make a temporary door.

With the door complete, the company began the process of recovering the cars from the sinkhole. Of the eight cars that had fallen in, three were completely buried. The other five were all at least partially visible. Like an archaeologist unearthing lost treasures, Baldock and his team exercised great caution to preserve what integrity the cars had left.

First, they used a crane to remove the cars that weren't covered with any dirt or debris. Next, they brought in a large vacuum truck and began the delicate process of vacuuming dirt from around the cars to prevent further damage. Once the loose dirt was removed, the team used a long-reach excavator to carefully remove boulders that trapped the cars. Finally, after Baldock and his crew cleared the surrounding debris, they brought the crane back to pull each car out of the sinkhole. It took a wide variety of equipment to get them out, and Baldock said the Talbert was instrumental in getting the right machines there when his team needed them.

“The Talbert trailer really helped us move all the equipment and coordinate the job,” Baldock said. “It allowed us to quickly mobilize cranes, excavators, long-reach excavators, backhoes and other materials we used to get the cars out.”

Not including time spent securing the foundation, the job took 16 weeks to complete.

Like a Corvette speeding around a racetrack, life has its own way of coming full circle.

“Kytes was always a salesman,” Baldock said. “He was selling me toy trucks when we were five years old. Now he's selling me Talbert trailers.”

A lot has changed over the years, but Baldock and Shockey's friendship is as strong as ever. They plan on keeping it that way by meeting every year at the National Corvette Museum. And they still talk about equipment with the same excitement they used to in the sandbox.

“Ben sent me a picture of a Corvette on the Talbert trailer. It was really neat to see,” Shockey said.

The trailer itself hasn't seen much rest since Scott & Murphy completed the job at the museum. Baldock said it's on the road 10 hours a day, sometimes six days a week.

In contrast, the cars Scott & Murphy recovered from the sinkhole won't be hitting the road anytime soon. The museum decided to restore three of the eight that were damaged. A 2009 ZR1 prototype, a white 1992 model that was the millionth Corvette produced, and a 1962 tuxedo black Corvette, which was the oldest car damaged, will return to the museum's Skydome looking as good as new. The other five cars will return to display, as well, but they will forever remain in the same condition they were in when they emerged from the sinkhole, mangled reminders of the power of nature.

As for the sinkhole itself, there has been much discussion about what to do with it. The incident sparked so much attention that attendance at the National Corvette Museum was up 70 percent in the months following. Museum officials initially decided to keep the sinkhole as an attraction; they wanted protective glass placed over it so visitors could walk out and look down into the hole. When that option proved to be too expensive, they decided to fill the hole and restore the floor to its original state.

Of course, Baldock and his team will be there to finish the job they started. They'll bring their cranes, excavators and dump trucks back to the museum, all on the decks of their Talbert trailers.