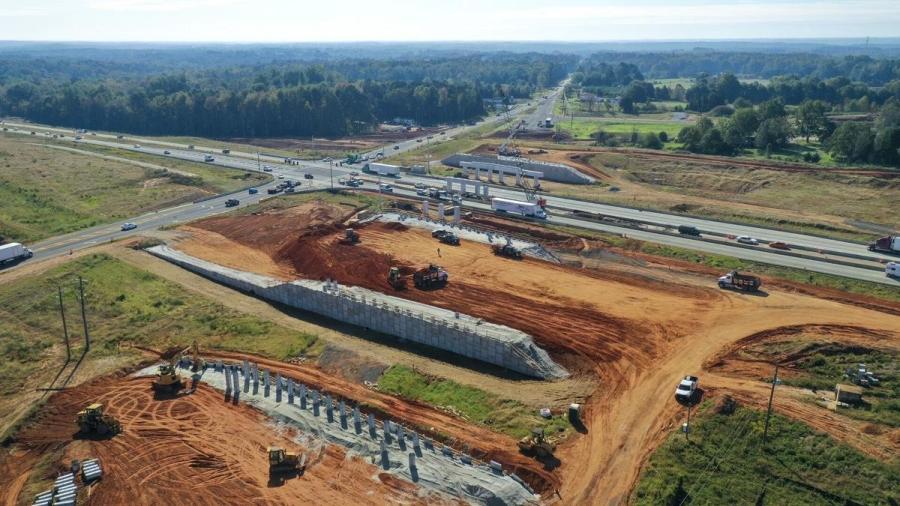 The new Harbins Road interchange at State Route 316 is visible in this aerial photo from late 2020. Gwinnett County has take the lead on the intersection to interchange conversion, which is being done in partnership with the Georgia Department of Transportation. (Gwinnett County photo)

New reconstruction and improvement efforts along 35 mi. of Georgia State Route 316 in Gwinnett, Barrow and Oconee counties will get under way by 2025, according to Gov. Brian Kemp. The rebuild is currently projected to cost almost $829 million.

The governor made the announcement March 30 during the 2021 Georgia Transportation Summit hosted by the American Council of Engineering Companies of Georgia.

Kemp and the Georgia Department of Transportation (GDOT) have plans in place to make a series of nine SR 316 upgrades that will remove existing intersections that rely on traffic signals, address side road stopped intersections and replace current at-grade separations with interchanges along the project route.

The need for the construction is based on both accident figures and current and future traffic congestion expected to occur in the northeast portion of the state east of Atlanta to Athens.

According to data from an Atlanta Regional Commission study conducted in 2019, Gwinnett County will become the most populous county in the region by 2050 with 1.48 million residents, even more than the population of Fulton County, by that time. That is significant because Fulton County now encompasses 90 percent of the city of Atlanta.

Barrow County also made the list with a potential population increase of 45,258 by mid-century.

Several of the road projects are still in the design phases and all of them should be under construction or under contract by 2025 with expected completion dates occurring in 2028. Once they are finished, the transformation of the various sections of SR 316 will improve traffic flow conditions and reduce the number of crashes on the newly upgraded freeway-style corridor.

Updating an intersection to an interchange, like what is planned for SR 316, typically results in a 28 percent reduction in injury-related accidents and a 27 percent reduction in non-injury crashes, according to data provided by the GDOT. Additionally, with the proposed upgrades it is likely that the numbers would show a greater reduction along the SR 316 corridor due to the current traffic volume and speeds. The transportation agency's current crash data shows that, on average, there have been a total of 408 property damage crashes and 151 injury accidents per year at 12 select intersection locations along SR 316

The portions of the SR 316 corridor currently being built or under consideration has more than 13 signals, side-stopped or right-in, right-out yield intersections and seven at-grade intersections from Hi Hope Road in Gwinnett County to the Oconee Connector in Oconee County. Each are set for improvements for safety and mobility reasons.

One section of the overall project that has been undergoing conversion to an interchange since last year can be found at Harbins Road and SR 316 near the Gwinnett County town of Dacula. There, county transportation officials are working with their counterparts in the GDOT on the more than $30 million project, but the county has taken the lead on getting the conversion done, the Gwinnett Daily Post reported in January.

In addition to the Harbins Road and Hi Hope Road conversions, other planned intersection to interchange conversions in Gwinnett, according to the newspaper, are expected to take place at Hurricane Trail, SR 8/U.S. Highway 29 and Drowning Creek Road.