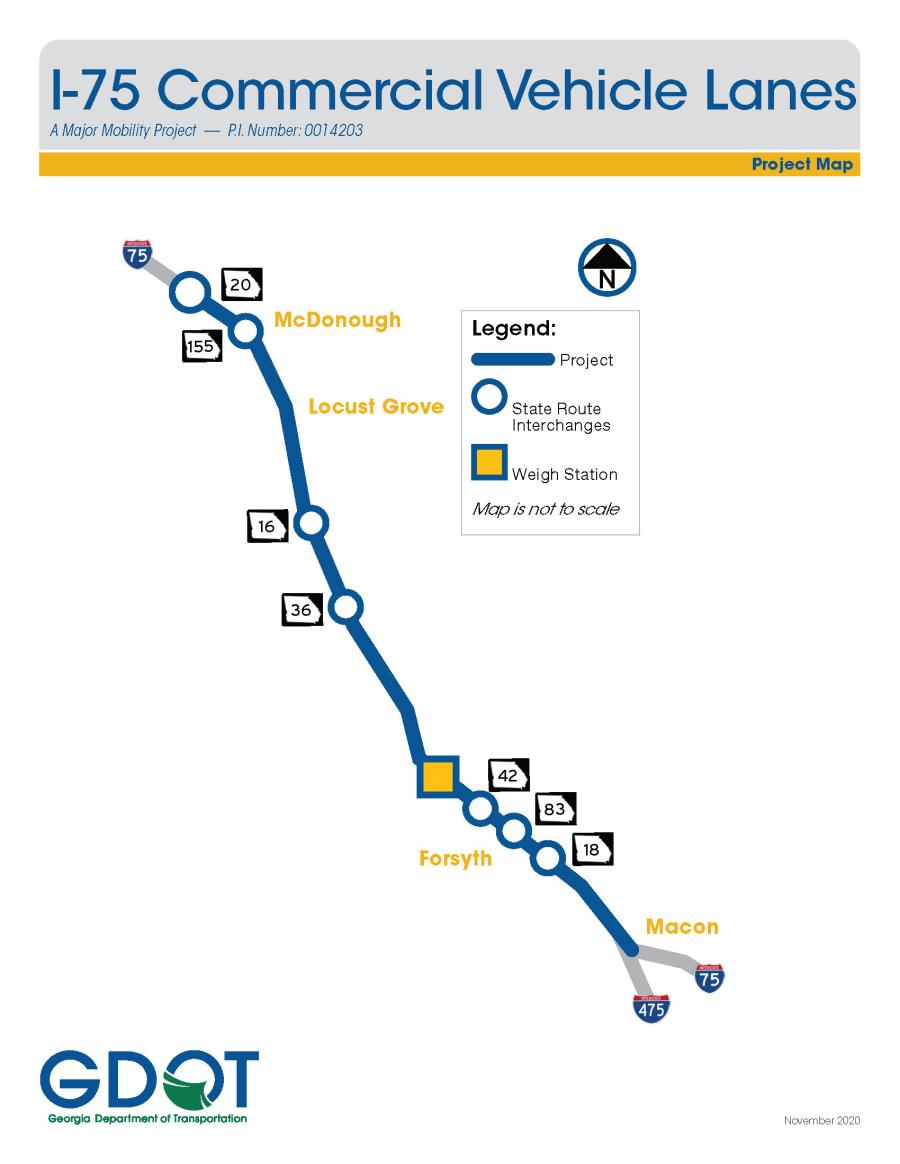 The Georgia Department of Transportation (GDOT)'s Interstate 75 Commercial Vehicle Lanes project, first announced in 2018, is set to get under way in 2024.

The $1.8 billion plan will include building two, barrier-separated commercial truck-only lanes northbound along I-75 from the I-475/I-75 Interchange near Macon to the McDonough area.

The new lanes will be non-tolled and will span across five counties: Henry, Spalding, Butts, Lamar and Monroe. The total length of the project is 41 lane miles.

GDOT said the impetus for the new I-75 lane project is to cut down on traffic congestion in the metro Atlanta area caused in part by the expansion of the Port of Savannah, almost 250 mi. to the southeast.

Department spokesperson Penny Brooks said the GDOT wants to be sure the roads are ready for more freight. She added that her agency is still planning the project, but that the enterprise will a free and more efficient access route to Atlanta, while keeping Georgia drivers safe from increased commercial traffic.

"We expect, at this point, the construction to begin in 2024, so we have another three years before we even take a pickaxe out and start pulling up the ground."

People that drive through or live in Monroe, Butts, Lamar, Henry or Spalding counties, the GDOT said, will see their commutes affected by the new I-75 expansion.

Macon's Angel Davis commutes to McDonough every day for work. She leaves home early to be on time.

"Most of that is due to the influx of traffic, cars and a lot of trucks," Davis explained, adding that she is in favor of the construction. With less traffic to deal with, she believes she will have more time to get other things done.

"I would gain two more hours of my day, literally," Davis said.

The I-75 Commercial Vehicle Lanes project is one of the state's Major Mobility Investment Program (MMIP) projects and an enterprise the GDOT has determined can be accelerated to open to traffic nearly two years earlier than originally scheduled.

Completion of the project is currently expected to be in 2028.