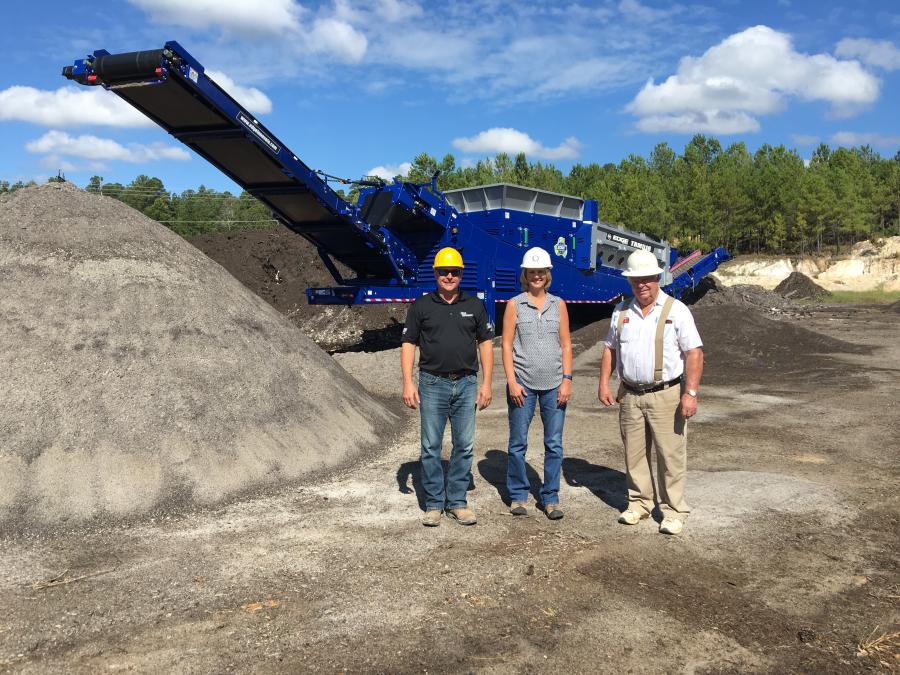 But Lisa Wilson, president of G. L. Williams & Daughter Trucking, doesn't see the company stopping there. The company has been successful in supplying contractors and landscapers within a 50-mile radius of the Central Savannah River Area, including Aiken, Augusta and Edgefield with their needs, and she's adamant on making sure it will continue to do so.

“We have two compost sites that are for grass clippings and things like that, and we are working on getting another permit on the site that will allow us to accept horse manure and food waste. We supply contractors with sand clay, mortar sand and fill sand from our mines,” said Wilson.

Recently, Wilson found a screener that works best for the company's efficiency through Woody Inman at Hills Machinery and it has made a great impact.

“We had a large stockpile of topsoil that we needed to screen. We also have the yard debris that the guys bring in from grass clippings and leaves, and we compost that down. Then, we have to screen that to get a finished product. We decided we needed to try something different to give us a better product so that we could start selling the compost. We called Woody [Inman] at Hills Machinery to see if he could recommend something for us. He said, 'I've got just the machine for you.'”

Inman brought the Edge TRM516 Trommel to G. L. Williams & Daughter Trucking, and it's since worked really well for the company. Wilson said that after running the Edge TRM516 Trommel, they have been able to screen in a few hours what used to take them more than a half day to do. To Wilson, Woody Inman of Hills Machinery was a big help with the machine.

“He had it here within one week,” said Wilson. “The front discharge area is rotating, so the operator can rotate it and stack a big radial pile so he doesn't have to move the machine. The operator can also control it remotely from the track hoe without getting off,” said Wilson.

Additionally, Wilson said that the Edge TRM516 Trommel is easy to transport to the company's different pits, and that she's impressed with the rear discharge belt, which separates the rejects from the finished product, eliminating the need for an extra operator.

Having the right equipment for the job has helped the nearly 50-year-old company to continue its legacy of success, but the father-daughter team aspect has proved beneficial to the company's continued success as well. Her father, G.L. Williams, founded the company in 1967 with one dump truck and one loader.

“I was working for Graniteville Company and working on the night shift and me and another fellow thought about going in the business of landscaping. So, we bought an old state highway truck and an old John Deere dozer with a bucket on the front and we started doing jobs together. As it progressed, I went in it full time and bought him out. So, that was 1967 that I started out,” said Williams.

Wilson said she grew up playing in the dirt and eventually began helping her father, operating dump trucks and equipment.

“I was a tomboy, so everybody would ask him if this was his son. We both looked at each other and smiled, and he'd say, 'yeah, that's my son.'”

Wilson went to Tri-County Technical College and Medical Laboratory Technology and worked in the lab for several years in Augusta.

“I started working weekends and holidays. I wanted to stay home with the kids and have a little more time, so I came here part-time. My mother and brother were here, and after I came, my mother decided to leave, so I started working full time. I've been doing it ever since. My brother went on his own in 2000, so then I started handling everything,” said Wilson.

Wilson has come a long way since then with her work in expanding and running the company.

“Well, she does such a good job,” said Williams. “She takes a big load off of me. She handles all the business, all the customers, all the problems. I mostly do the bidding, and I take care of the jobs,” said Williams.

Lately, the company has been busy with several large DOT (Department of Transportation) projects.

“We are hauling 60 to 70 loads per day out of several of the mines,” said Wilson. The company utilizes its fleet of excavators and front-end loaders for its jobs.

Wilson also said that her employees are extremely important.

“We have a really good crew. The drivers work hard, whether it's coming in early or staying late to make sure every load of material is delivered promptly. Without our good employees that provide us with loyal customers, we would not be in business.” CEG

Taylor Belmer edited and contributed to this article.