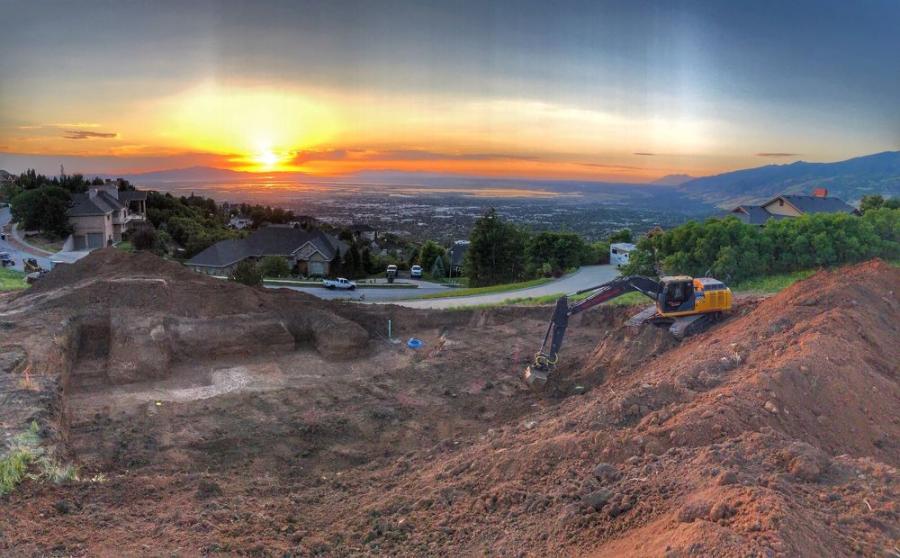 “We have to do a good job — do it right for the customer so we have a next job to go to,” said Ryan Goodfellow, owner of Rock Structures.

When California native Ryan Goodfellow moved to Utah in 1994, he gained experience working for an excavation company, but three short years later, he founded his own: Rock Structures Utility & Excavating.

"At the other company, I had to sell the job, schedule the job, do the job, build the job and collect payment," Goodfellow recalled. Since he was already finding his own jobs, he decided he might as well do it for his own company, so the 21-year-old started the business in March 1997.

The Ups and Downs of Business 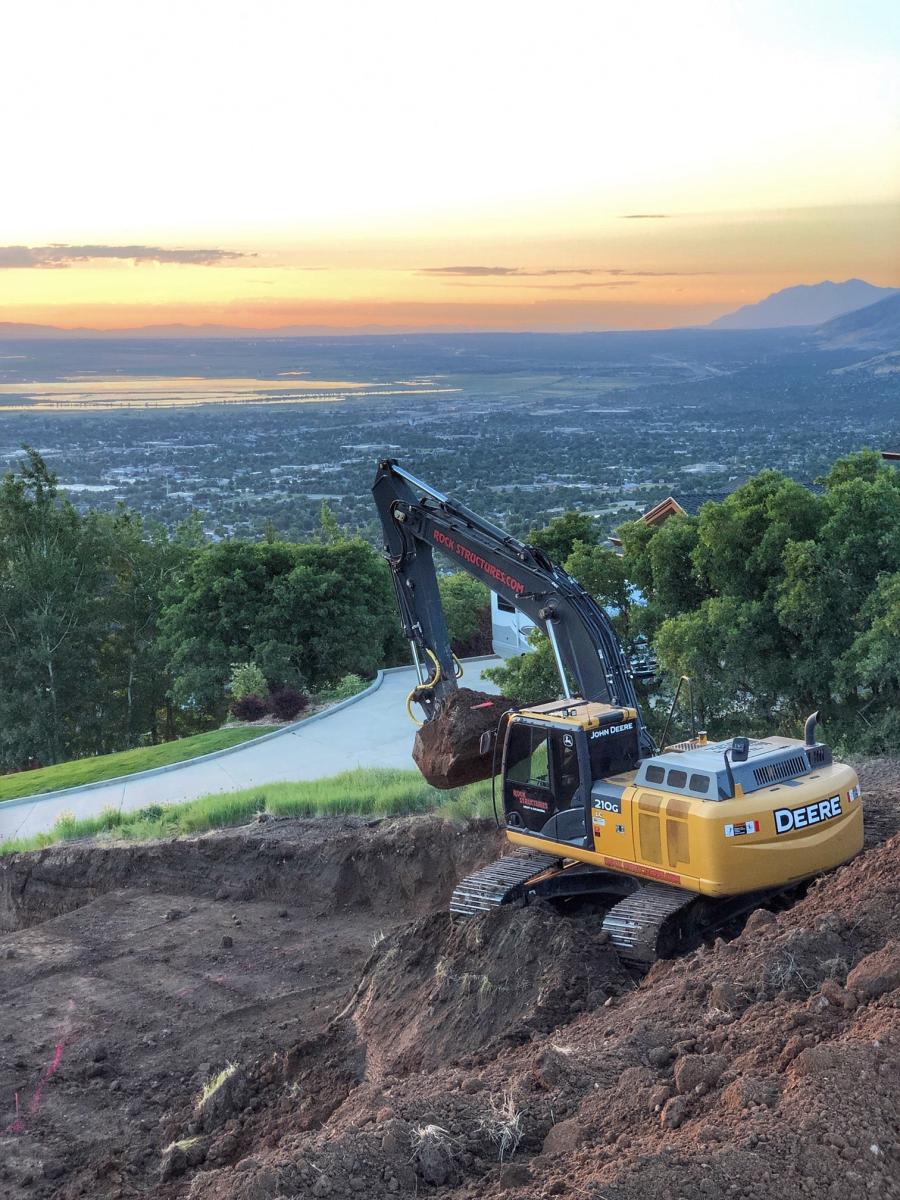 Goodfellow made a 10-month rental-purchase deal with a local Cat dealer on an excavator and the business was on its way. At the 10-year mark, Rock Structures had 43 employees, 25 tractors, 13 crew vehicles and three semis.

"But the economy tanked," he reminisced, "and the company went down to three of us with three tractors."

Those three kept working for their core customers — digging basements for new foundations, backfilling around houses, doing residential grading and building rock walls. They stayed busy through 2010 and by the following year, the company started growing again.

Today, the Kaysville, Utah, business has eight tractors, three crew vehicles and one truck. Goodfellow wants to keep the business this size, and keep jobs close — within a 40-mile range.

Of those on Rock Structures' short employee list, one has worked "on and off" since 1998, for a total of about 15 years, one has been there for 16 years, a couple guys have worked there for six years and Goodfellow has "some new guys."

Other businesses can't keep their guys busy, he said — but he does. Knowing that his employees have families and responsibilities, he strives to take care of them like family. He tries to establish a family relationship with his employees. 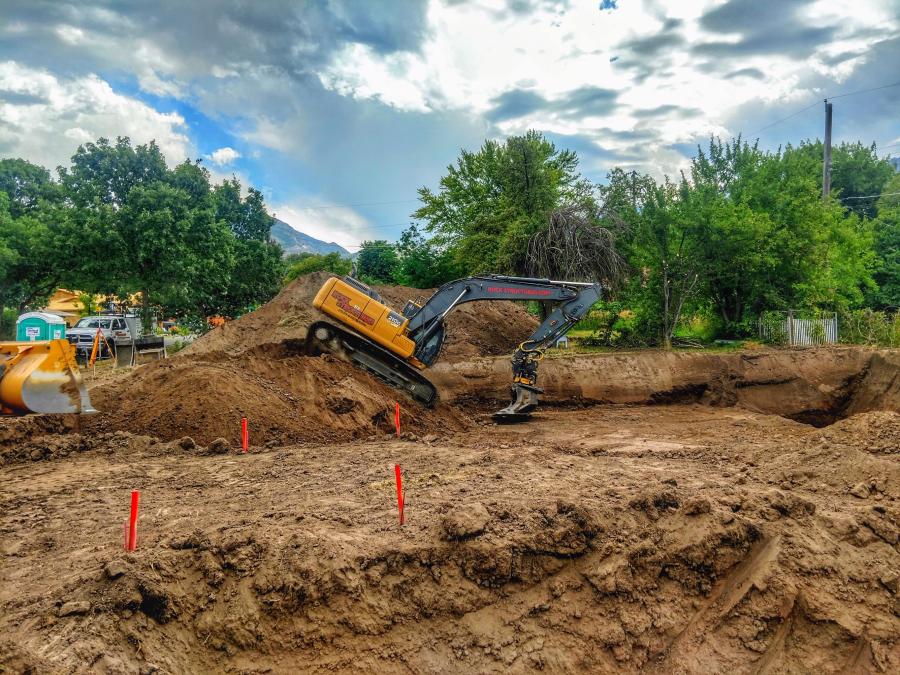 For example, he lets them use the tractor for personal work at home and he buys lunch a couple times a month.

"It's nice to have guys who have been with you for a while because you get to the point where you can almost read each other's minds," Goodfellow said. "You don't have to worry about them not knowing what they're doing or what's expected. They know the customers and do the job right; I can turn them loose to be their own boss."

That frees up the main boss to do other tasks, such as bidding, billing and scheduling — in addition to one-third of the work load with his own crew. Other office work, such as payables, receivables, job folders and the daily paperwork, is done by the company's actual owner, his wife, Jennifer.

But before he turns his employees loose, he trains them. Due to a labor shortage that has reduced the number of skilled workers, Goodfellow is willing to train people on the job.

"Equipment classes don't teach you how to do the work, just how to run the equipment. I'll pay guys to learn."

"One employee never knew how to do ground work or put in pipe; in a year and a half, he learned a lot."

"Our dealers take good care of us," he said and that's why he's been with Cat for 22 years and with Deere for 17 years.

Two machines in the fleet are semi-autonomous. The tiltrotators from Engcon make work easier and more productive. Goodfellow describes it as "like having a hand out there" and says it adds efficiency and allows them to work from any position while it saves material and labor. 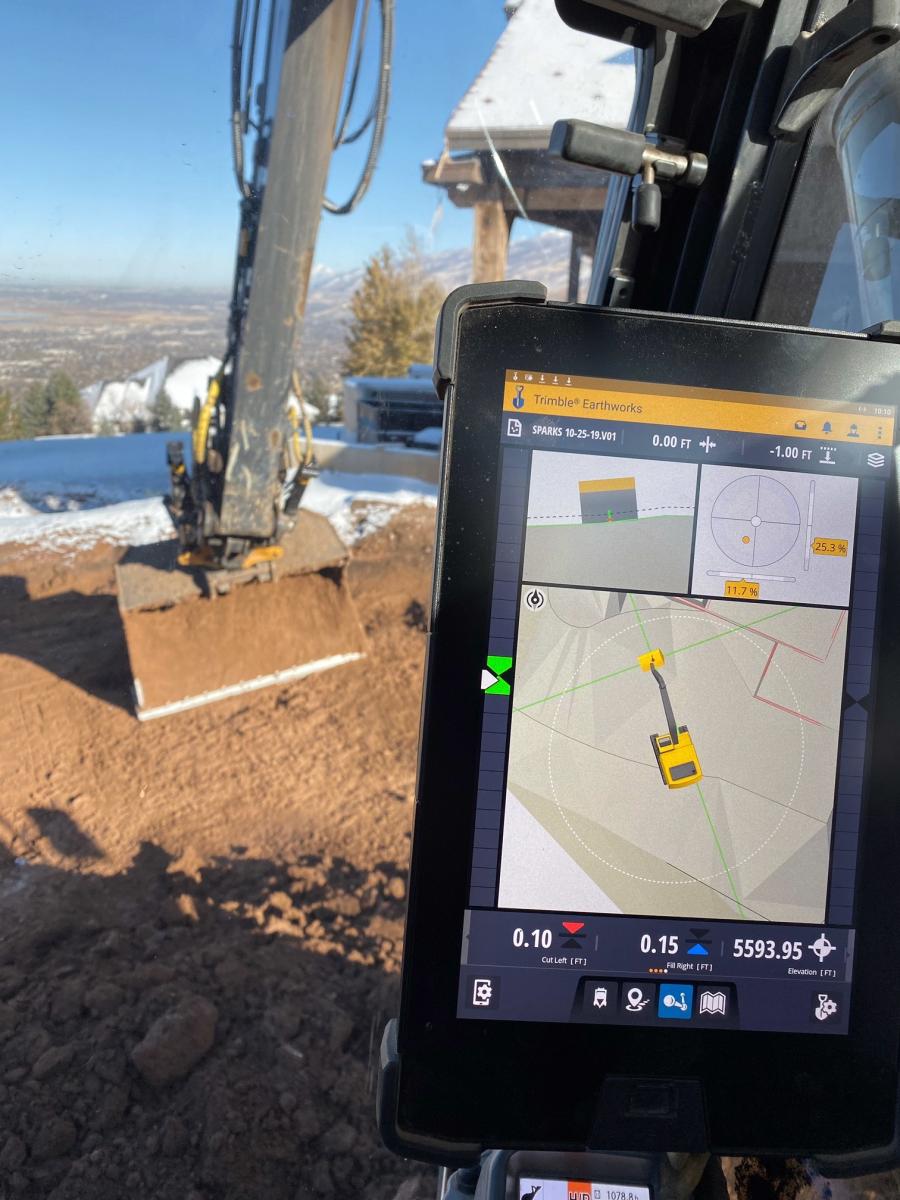 Another asset that increases their efficiency is Trimble Earthworks 2-D and 3-D GPS systems. In fact, Goodfellow is a tester for Trimble machine guidance systems.

"It's amazing to run machine guidance; it frees up labor because there's no need for a grade checker."

Not only has it bumped productivity 20 percent by eliminating the need for a surveyor and allowing them to go stakeless, it also enables them to use less material under pipes.

Grade tolerances are better because the 2-D laser recalibrates the difference in elevation, Goodfellow said. "I can check the grade as I'm digging."

This enables him to move an employee to another crew to generate more revenue instead of having two guys on one job. "It's a game changer," he added.

Although he insists that he doesn't have a wish list for new equipment, Goodfellow anticipates upgrading his skid steer loader in the not too distant future because he's ready to go the next size bigger. Meanwhile, if he needs extra equipment for a job, he rents it — from Wheeler Machinery, Honnen Equipment or Intermountain Bobcat.

Rock Structures can do backfilling and digging for underground utilities and pipelines, but the standard job they're known for is a 1,500-2,200-sq.-ft. basement dig, although Goodfellow mentions an atypical basement dig they worked on on-and-off for about a year. It was for a bigger house with a 4,000 to 5,000-sq.-ft. footprint. The house featured a theater room that drops two feet and a 18 to 20-ft.-tall sports court, so they had to dig 10 ft. deeper than a normal basement. In addition, they used dump trucks to move more than 12,000 yds. of material and another 150 dump loads of 2,200 tons of boulders for the retaining work on the property.

Soil types in northern Utah include sand, clay and rock, but Goodfellow stays away from rocky soil in order to avoid having to blast or use hammers. The soil is consistent across the valley, but one of the challenges of the changing business methodology is the reliance on soil engineers, whom he believes can go "overboard" on testing. 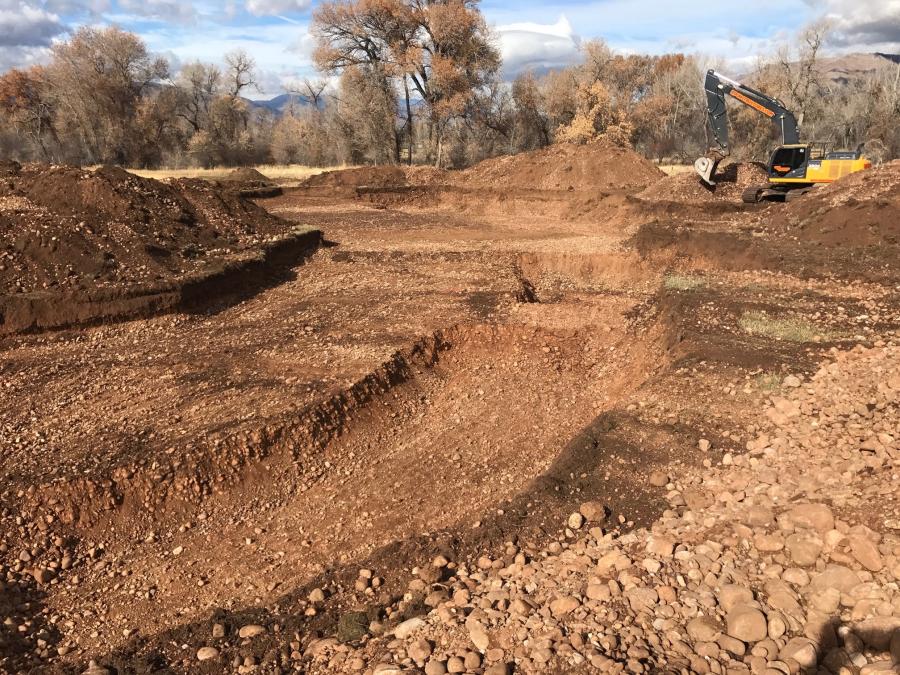 "We used to show up, dig and leave," Goodfellow said. "Now, we have to deal with soil reports, dig two feet deeper and put supports in and over-excavate down to native soil. It's a schedule killer."

Goodfellow knew there was disturbed soil at one job site. An old house had settled and was torn down before the property was sold. The new owners had tests done. In one 30x20-ft. spot, his crew had to dig down 15 ft. to reach native soil. "That took a day and a half — and another day and a half to put it all back," he said.

Another job required a bore pit on each side of the road so the crew could get a drill through and push 16-in. round casing through the 36-ft.-long, 12-ft.-deep hole, with pipe inside. The plan was to try not to disturb the existing utilities and provide a safer work environment. Less traffic control was needed because they weren't crossing the road. However, Goodfellow said the boring company nearly hit a storm drain pipe, so they pulled out the equipment and tried again, 2 ft. up. When that didn't work, they took additional measurements and decided to go down another 6 ft.

"We were already 12 feet deep," he said. "Ground water is at 3. The surrounding soil was like beach sand. It's like digging at the beach."

They filled in the dirt, pulled out the trench boxes and started anew because of soil conditions. It's a job that should have taken two to three weeks, but Goodfellow's crew was there six. "It messes with the schedule."

Excavation is a large part of the business, but Rock Structures also delivers gravel, rock, topsoil and sand. In addition, they create water features, rock walls and stairways and other kinds of rock structures, as their name implies.

One duty that falls on Goodfellow's shoulders is social media. He jokes that he started a Facebook page and an Instagram page for the company so friends and family don't have to look at tractor pictures, but he also finds it a good place to recruit employees and get jobs. "People who follow you want you to do work or have common interests," he said. 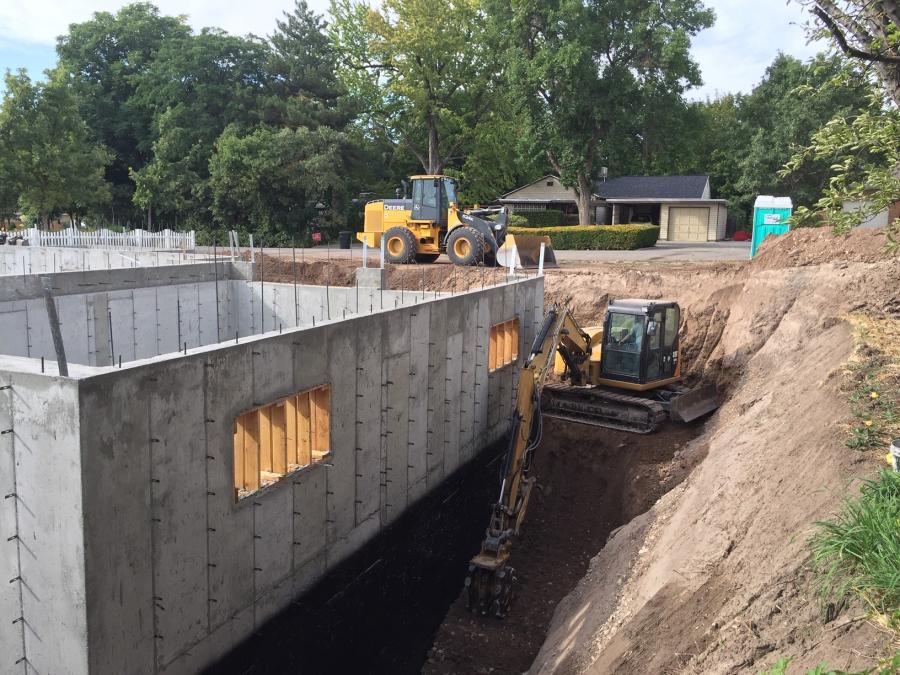 Social media also has opened doors with other companies and helped establish good relationships. It's how Goodfellow became a Cat ambassador and developed a relationship with Engcon. In addition to being on Facebook, Rock Structures has a YouTube channel and 75,000 followers on Instagram.

Recently, Goodfellow experimented with another type of media by joining Missy Scherber of the Scherber Report on a podcast for ConExpo/ConAGG, during which he talked about the labor shortage, machine technology and guidance and what it takes to be in business.

"Little did I know! I never knew it would get this big or stay this long," he laughed.

What he does know is that a business owner has obligations and relationships to maintain and cultivate. He understands the importance of keeping his word, and that it's vital to take care of his employees and his customers. And he realizes the significance of keeping the business focused.

"We have to do a good job — do it right for the customer so we have a next job to go to." Fortunately, he added, people are always building houses. CEG