Granite Awarded a Pair of Projects in NorCal, SoCal 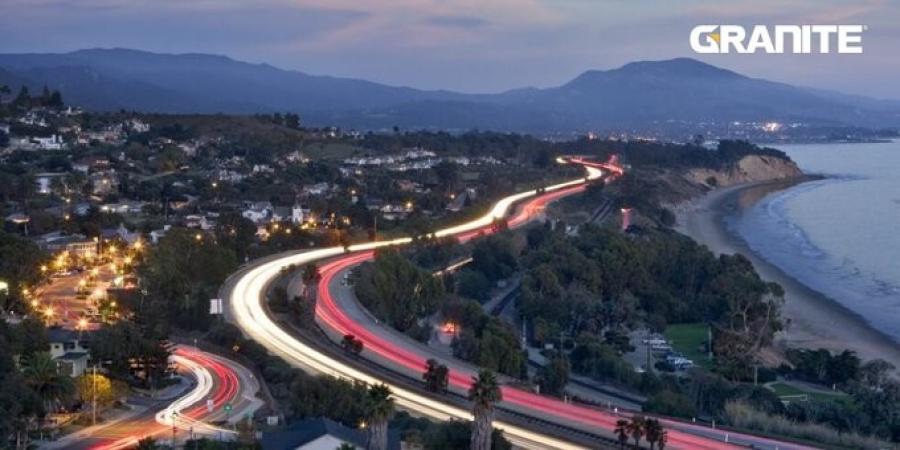 Granite announced recently it has been awarded a $79 million contract by the California Department of Transportation (Caltrans) to construct the Highway 101: Carpinteria project in Santa Barbara County, Calif. The $79 million contract award will be booked in Granite's second quarter 2020 backlog.

This project is one of five segments that will be constructed as part of an overall effort to reconstruct 10.9 mi. of Highway 101. In December 2018, Granite announced that it had been selected as the construction manager/general contractor (CMGC) for the overall Highway 101: Carpinteria to Santa Barbara project. The estimated construction contract value for the remaining segments is approximately $400 million.

"This project is critical to the safety and mobility of one of the state's most congested highways," said Kyle Larkin, Granite executive vice president and chief operating officer. "As the CMGC, Granite is proud to be partnering with Caltrans, Santa Barbara County Association of Governments and the City of Carpinteria on this project and pleased to see local and state tax dollars from Measure A and Senate Bill 1 being put to work."

Scope of Granite's work for the Highway 101 Carpinteria project includes the full rebuild and addition of three miles of new high occupancy vehicle lanes, on- and off-ramp improvements, construction of new sound walls as well as improvements to local streets and intersections.

Construction is expected to get underway in April 2020 and estimated to be complete by summer 2022. For more information on the project, visit SBROADS.com.

Larkin also states, "As is the case with all of our projects in these challenging times, Granite is working together with our clients and partners to continue building needed infrastructure improvements while ensuring safe working conditions for our crews that are in alignment with guidance from federal and local health officials."

Originally constructed in 1958, the Folsom Lake Intake supplies raw water from Folsom Lake to the El Dorado Hills Water Treatment Plant where it is treated and conveyed to local customers. This project will provide critical improvements to the existing facilities including the replacement of all intake structures, pumps and associated piping, electrical, controls and site modifications. Crews will also be responsible for constructing a temperature-controlled device for EID's intake facilities in order to preserve the cold-water pool in Folsom Lake to help enhance downstream habitat for anadromous fish species as well as maintaining water delivery service during construction.

"Granite's Sacramento Valley Region has a long history of working with the irrigation district and the team looks forward to working together again to complete the necessary improvements at Folsom Lake," said Carter Rohrbough, vice president of Granite's Northern California operations.

Construction on the project is estimated to begin this summer with an estimated completion in spring 2022. For more information, visit the project website at eid.org.

Granite is America's infrastructure company. Incorporated since 1922, Granite is one of the largest diversified construction and construction materials companies in the United States as well as a full-suite provider in the transportation, water infrastructure and mineral exploration markets. Granite's code of conduct and strong core values guide the company and its employees to uphold the highest ethical standards. In addition to being one of the World's Most Ethical Companies for 11 consecutive years, Granite is an industry leader in safety and an award-winning firm in quality and sustainability. For more information, visit the Granite website, and connect with Granite on LinkedIn, Twitter, Facebook and Instagram.