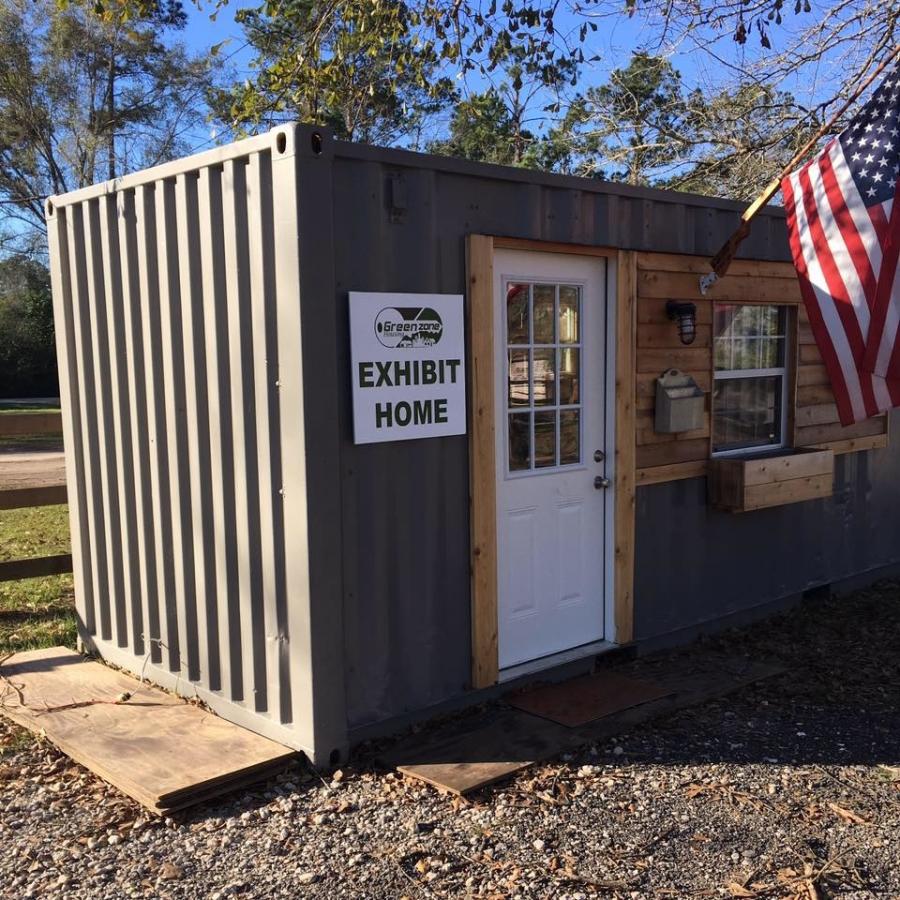 Green Zone Housing photo. Scores of volunteers will modify the container with things like insulation, air conditioning, electrical outlets, kitchen appliances and a shower and toilet. Then the keys will be given to a military veteran in need of a home.

In the heart of this small town, on a patch of grass near historic homes and antique shops, is an old shipping container. It's like ones used in the Port of Houston, hardly a sight to behold. At least not yet.

Within weeks, scores of volunteers will modify the container with things like insulation, air conditioning, electrical outlets, kitchen appliances and a shower and toilet. Then the keys will be given to a military veteran in need of a home.

It's a project of Huntsville-based Green Zone Housing, a newly formed nonprofit that is trying to provide veterans with affordable places to live. For co-founder Mark Cook, the repurposing of containers makes sense because they are made of steel that is marine-grade and corrosion-resistant.

“I slept in these overseas” as an oil-field worker, Cook told the Houston Chronicle. “I knew I could make a house out of them. They can withstand winds. They're water-tight. They're economical. And they're everywhere. They're stacked like cordwood on the Houston Ship Channel.”

The project is part of a national movement to use “tiny houses” as a short-term solution for homelessness. A Nashville pastor has built several 60-sq.-ft. (5.6 sq m) units on the grounds of his church. Seattle has pledged to spread 1,000 insulated huts built by volunteers in camps across the city. In Kansas City, some veterans have plans to construct 50 small homes for those suffering from post-traumatic stress disorder, or PTSD.

Cook and his partners, Vietnam veteran Dave Nash and author Melanie Davis, said they see a similar need among greater Houston's veterans. While there are transitional programs providing them with help for PTSD and other combat-related mental illness, “they go out the same door they came in” and often have nowhere to stay, Nash said.

Greater Houston has one of the nation's largest populations of veterans, with more than 78,000 in the city alone. With many of them staying in shelters or on the streets, nonprofit groups and government agencies began a campaign in 2012 to find places to live for them.

Since then, The Way Home effort has placed some 5,000 veterans in Harris and Fort Bend counties in permanent housing, generating praise from local advocates and national experts.

Officials said there were 537 homeless veterans in the two counties last year. In Montgomery County, there were 35 veterans living on the streets or in shelters in 2015, according to the most recent data available.

Green Zone Housing began to build support for its project last year by converting a container previously used as a fireworks stand into an exhibit house. The model, which features a kitchen and living area, is mobile but is found most days outside a hardware store in the city of Montgomery, located about 55 mi. north of downtown Houston.

The nonprofit is constructing the first complete home from a 40-ft. (12.2 m)-long, 8-ft. (2.4 m)-wide container that was donated by a local equipment company. The work is being done in Montgomery's historic district to help attract potential donors and volunteers.

The builder is Mike Bradford, a Montgomery resident who constructed living quarters and office space from shipping containers during a 20-year career as an underwater welder in the Navy. He now designs and builds custom furniture.

The exhibit house “was a rusted, beat-up fireworks stand,” Bradford said. “It was a mild disaster when we got started. But you go into it now, and you'd say, 'I would live in this.' That's what we want.”

It's estimated that each house costs about $20,000 to build. The recipients are expected to help with the construction before the house is installed on a foundation.

Cook said the group is hoping to buy as many as 15 acres in Montgomery County for a manufacturing center and office space, as well as a chapel, gym and other services for veterans who decide to keep their homes on the property. The first phase would include at least 20 homes, he said.

“I'm looking for a place that can have a community to help each other in recovery,” Cook said, adding that he would like to expand the project beyond Montgomery County after the initial phase.

The first house will go to William C. Franks Jr., 45, an Army veteran of Desert Storm who suffers from PTSD.

After seeing combat in the Gulf War, Franks said, he fought depression and anger. He ended an engagement to his high school sweetheart. One night he woke up and drove 30 mi. to his grandfather's house to watch TV. He had no idea why.

“I couldn't tell what was going on,” said Franks, who also served seven years in the National Guard and Army Reserve. “There's a lot of emotions that you don't process in the military. Then they come out.”

Franks inherited his grandfather's house after he died in 2013 but soon lost it because of a reverse mortgage. He bounced from one relative's house to another before ending up at a homeless shelter in New Orleans for three weeks last year.

That's when an Army friend connected him with the PTSD Foundation of America's Camp Hope, which provides temporary housing and care for those with post-combat stress.

The program, which is located in northwest Harris County, has allowed Franks to take a “time out” in order to regain control of his life, he said. He has attended Alcoholics Anonymous meetings, received counseling and rediscovered the gym.

But Franks was unsure about his destination after completing the program. That changed when he was selected in February for Green Zone's first house.

Franks will be involved in the design and construction. Once the work is finished, the house will be moved to a pad at Camp Hope, where he will live rent-free for a year. By then, he hopes to have a job and be on the path to purchasing a larger home and selling or leasing the repurposed container to another veteran.

That's the goal for Green Zone Housing, too, said J.R. Harris, who is on the group's board of directors.

“This isn't welfare,” he said. “It's about a sense of belonging and sense of purpose. That's what we're hoping to give them.”