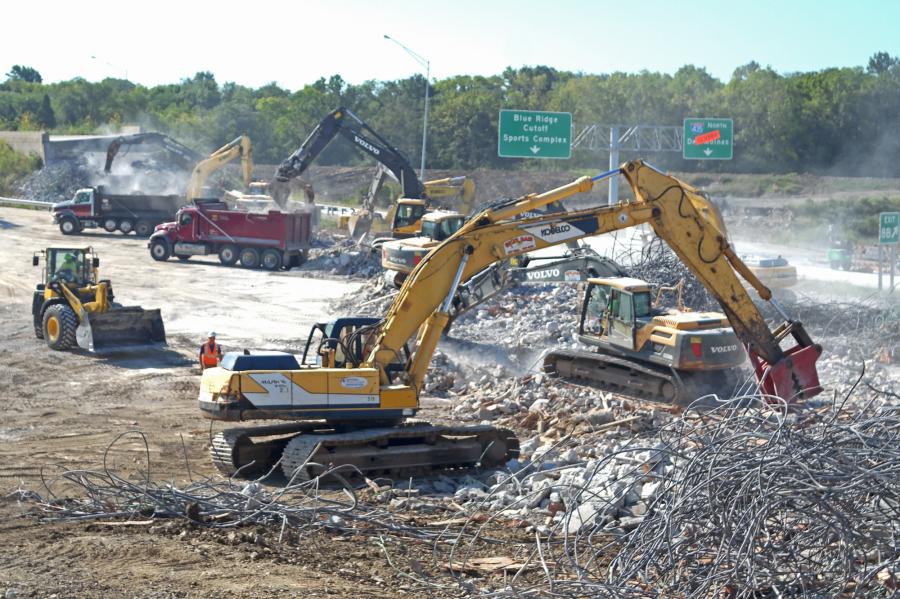 Greg Bair Track Hoe Service Inc. finished the demolition of the I-435/ I-70 interchange ahead of schedule. (Klorissa Box, GBTHS photo)

For Greg Bair and his team, the recent demolition of two exit ramps connected to MoDOT's I-435/ I-70 interchange project was business as usual. Bair's chosen profession, however, is anything but routine.

"A kid dreams of tearing stuff up," said Bair, president of Greg Bair Track Hoe Service Inc. "We get a variety of jobs. They all relate to demo, but they are different, so it keeps things interesting."

Established more than a quarter-century ago, Bair's company is known for its expertise in demolition, drilling and rock breaking. The youngest of three brothers working in the construction field, Bair learned early on the value of hard work and preparation. The recent I-70 undertaking was no exception.

"The planning for a project like this is incredible. You have to figure things out, step by step. Every bridge is different. These were curved, long and spanning over a lot of I-70. It took a long time to protect the highway. You have the demo and also the cleanup, so there's a lot of work involved. We finished this job 28 hours ahead of schedule, which is always a good thing." 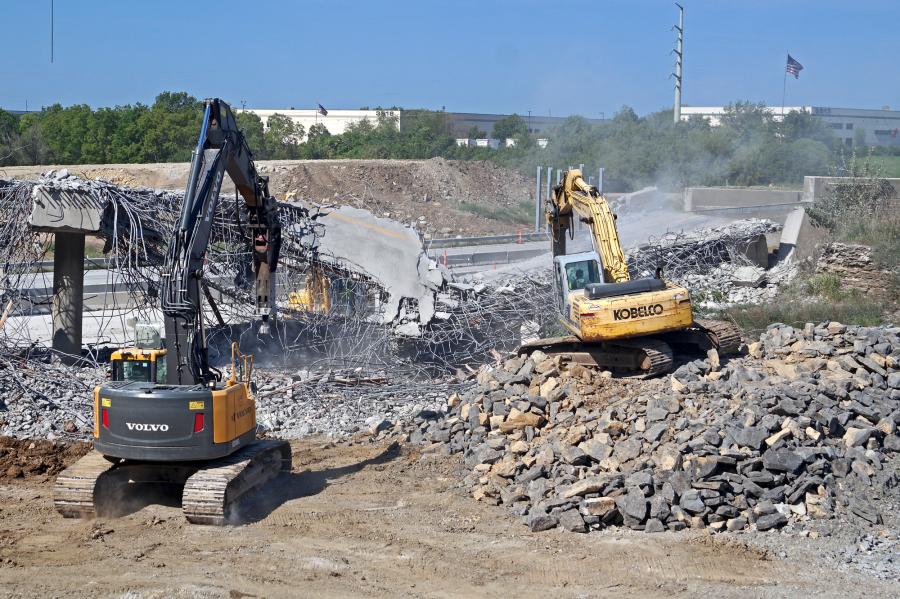 The assignment was not, however, without its challenges.

"We had a track hoe break down," said Bair. "We had a mechanic on site the whole time, but it couldn't be fixed, so we had to park it and go from there."

Seeking out jobs others may find too difficult or tedious, Bair isn't afraid to take on big projects, with the help of his more than two dozen employees. Office manager Danielle Tucker plays a key role in keeping operations on track, as does estimator/project manager Andy Shorten, who made certain the I-70 assignment was carried out smoothly.

"The work began the evening of Sept. 6 and lasted through Sept. 8, beginning at 9 p.m. Friday and finishing Sunday at 3:00 a.m.," said Shorten. "The road was opened seven hours later.

We ran a 12-hour day shift, and a 12-hour night shift until the work was complete. Each shift included laborers, equipment operators, truck drivers and mechanics. A handful of key guys worked the entire job straight through.

"We had additional help from 10 guys who are not regular employees," said Shorten, who added that his boss stepped in whenever there was a need.

"Absolutely, it was helpful. We try to have a few floaters on each shift, who are knowledgeable and capable of performing and directing the operation. Greg does an outstanding job of providing direction to the guys to keep the overall operation moving forward. No matter how much planning you do to develop a demolition plan, there are always unforeseen situations that arise in the heat of the moment.

"Without the ability to improvise, your job will halt. Greg always is able to quickly make effective changes to the demolition plan to keep the job going. Especially when everyone else is stumped, scratching their heads, Greg comes up with a simple and effective solution. It was a total team effort, from the project managers for the general contractor, down to our laborers doing final sweep to clean the road. When you take a typical month-long demo job and try to complete it in 30 hours, you need everyone working together."

Approximately 30 pieces of heavy machinery were needed to perform the work. 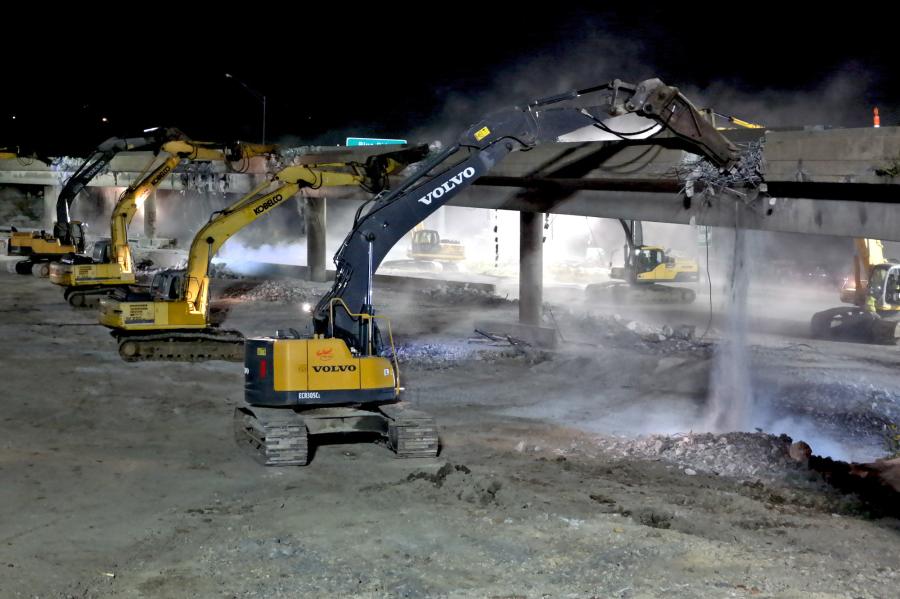 "We hired security services for the week leading up to the demolition, because vandalism has been a problem on the job. We wanted to spend about three weeks moving in equipment to the project, and ended up doing it all in three days, so there was less exposure to vandalism. If our equipment had batteries stolen, copper wire clipped out, etc., we would have machines broken down from the get-go. Also, another challenge on these types of jobs is always trying to keep up with our normal day-to-day operations, while at the same time getting prepared for a job of this magnitude."

"The ramp bridges were constructed on a radius, and were supported by single center piers. As you begin demolition of the structure, its overall structural stability and integrity deteriorates quickly. It makes for a more dangerous and unpredictable demolition. We had to have tight communications with each demolition operator, to ensure demo went exactly as planned."

Crews protected the highway by laying down approximately 12 in. of aggregate material. Debris was sorted and disposed of, as well.

Rebar was separated from concrete. The rebar was then hauled to the scrap yard, while concrete was taken to a waste fill area.

Before the demo began, the team had to develop production rates, equipment types, sizes and amounts, also while procuring machinery, crews and materials. The company spent roughly one month coordinating and preparing for the job.

Shorten said there has to be a solid relationship, to carry out a job of this nature.

"Our contract was with Emery Sapp & Sons. Their contract was with MoDOT; however, there needs to be a level of trust, understanding and expectation between us and MoDOT, for them to feel comfortable with us performing this work. MoDOT has an obligation to the general public to perform these projects in a safe and timely manner, as to limit adverse impact to the driver on the road. Emery Sapp and all of its employees, subcontractors and suppliers work intimately together to deliver a project that MoDOT is pleased with." 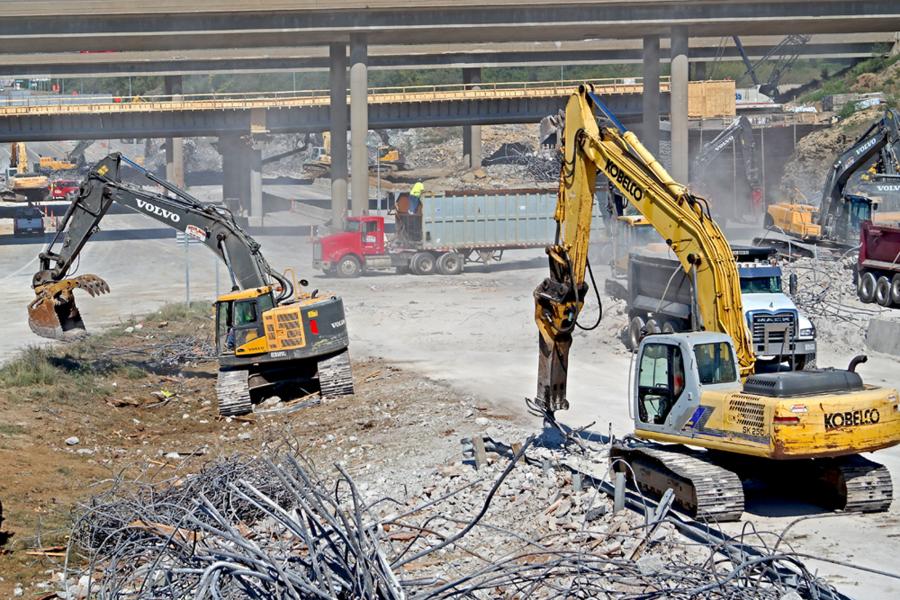 "This was one of the largest, if not the largest, bridge demolition project ever in the Kansas City area to be completed in one weekend," said Shorten, who acknowledged that finishing ahead of schedule was extremely satisfying for everyone involved.

"It was a great relief. We could all go home and get some good rest on Sunday, before going back to work Monday morning."

"The next two bridges have about double the volume of concrete, and they are out of reach to standard excavators, so the demolition method will be much different, slower and more tedious. This means the cleanup effort will have to have more equipment, and will have to make up some time. High-reach excavators will be used to aid in the demolition."

As for the crew's most recent work, said Shorten, "The hardest part of the job, and the most stressful, was the planning and preparation. Once the road closed and we could get to work, we all could breathe easy and just do our jobs."

Bair added, "Demolition takes good operators. It's not simple, and you must be organized. You have to think things through every time, to be successful." CEG