Hard Hats for Safety — and a Statement 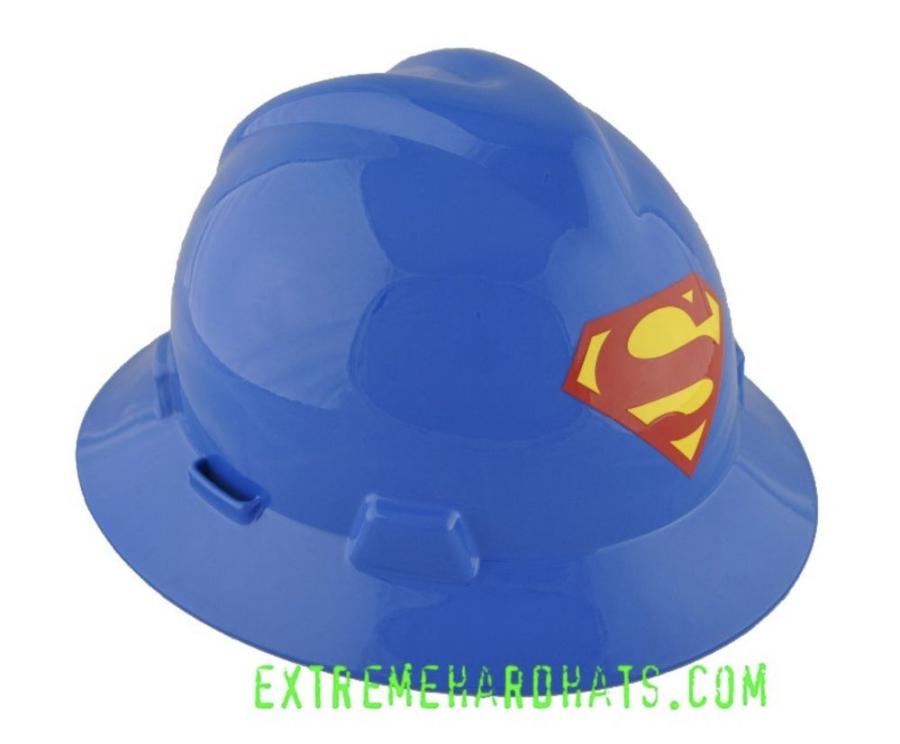 Hard hats can let you make a statement … like what you think of yourself on the job site.

What came first, the hard hat or the PPE laws?

When E.W. Bullard returned home from World War I, he used his doughboy Army helmet to design protective headgear to improve industrial safety. Bullard sold carbide lamps and mining equipment to gold and copper miners who were wearing a soft derby, similar to a baseball cap.

In 1919, Bullard patented the "hard-boiled" hat made of steamed canvas, glue and black paint. He then developed an internal suspension to provide a more effective hat. 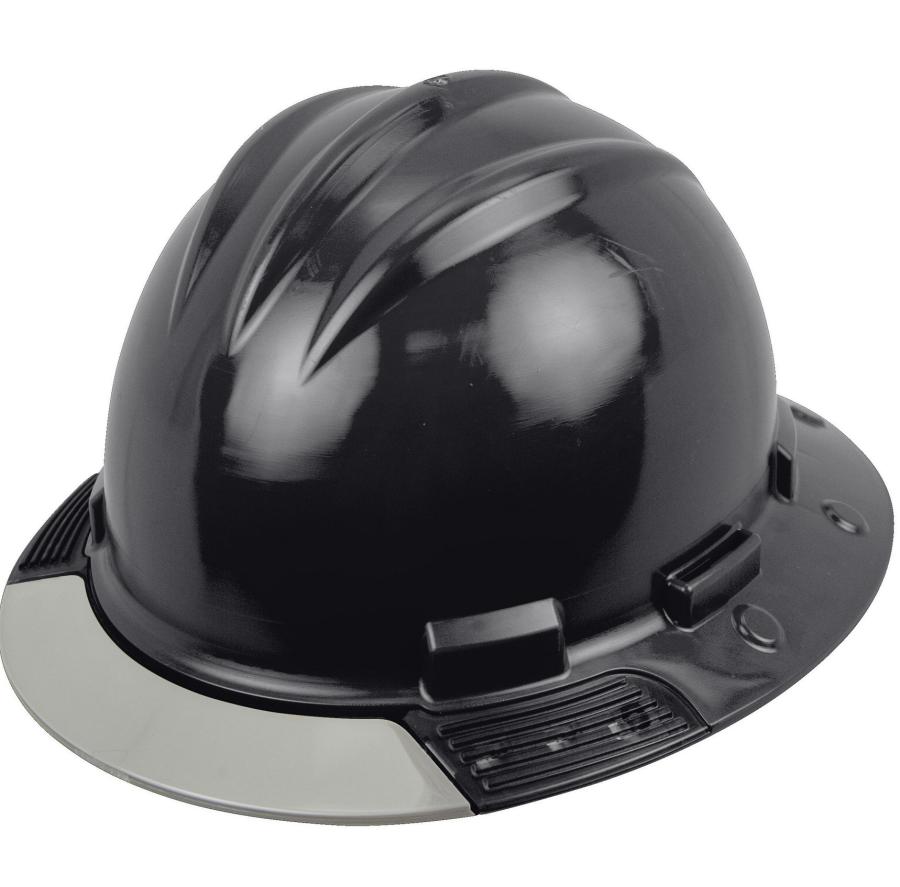 Bullard's invention came along at a critical time. Industrial production increased during World War II and so did workplace accidents since a high rate of production and winning the war was a higher priority than worker safety. In the two years before OSHA's beginning, 14,000 workers died each year from workplace hazards, and another 2 million were disabled or harmed.

In 2019, Bullard, a global provider of personal protective equipment, is celebrating the 100th anniversary of the company's invention of the hard hat.

"We feel a great responsibility to our customers," said Wells Bullard, CEO. "My great grandfather invented the hard hat because he was able to see a problem that wasn't being solved. He saw the need to invent something that allowed millions of workers to go home safely at the end of the day when they otherwise wouldn't have."

The Golden Gate Bridge's construction in the 1930s marked the first appearance of the "designated hard hat area on a construction site." Bullard supplied the hard hats and its engineers designed an original supplied air respirator for workers.

However, hard hats didn't become a government-mandated requirement until the advent of OSHA. On April 28, 1971, the OSH Act became effective that states employers must provide required personal protective equipment at no cost to workers. OSHA requires, in 29 CFR 1910.135, that if the following hazardous conditions are present, then head protection is required:

In 1997, the American National Standards Institute (ANSI) updated its performance standards for hard hats, which includes:

The material used to manufacture hard hats evolved over time. By 1933, the hard hat was made with aluminum; however, because it is a conductor of electricity, it had to be replaced by other materials.

In the 1940s, Bullard developed its trademark three-rib design along with a heat-resistant fiberglass hard hat. In the following decades, thermoplastics replaced fiberglass as a better, lower-cost alternative.

Today, hardhats are made are often made from lightweight, durable High-Density Polyethylene (HDPE) which doesn't conduct electricity and weathers the elements.

PPE is only effective if it is worn properly at all times. In the early 1980s, comfort began to play a part in the design of hard hats when Bullard launched a helmet with nonslip ratchet suspension with a knob in back to adjust for fit. Bullard has since upgraded the suspension systems in its hard hats and added easy-lock snaps for easy height adjustment and an enhanced brow pad. 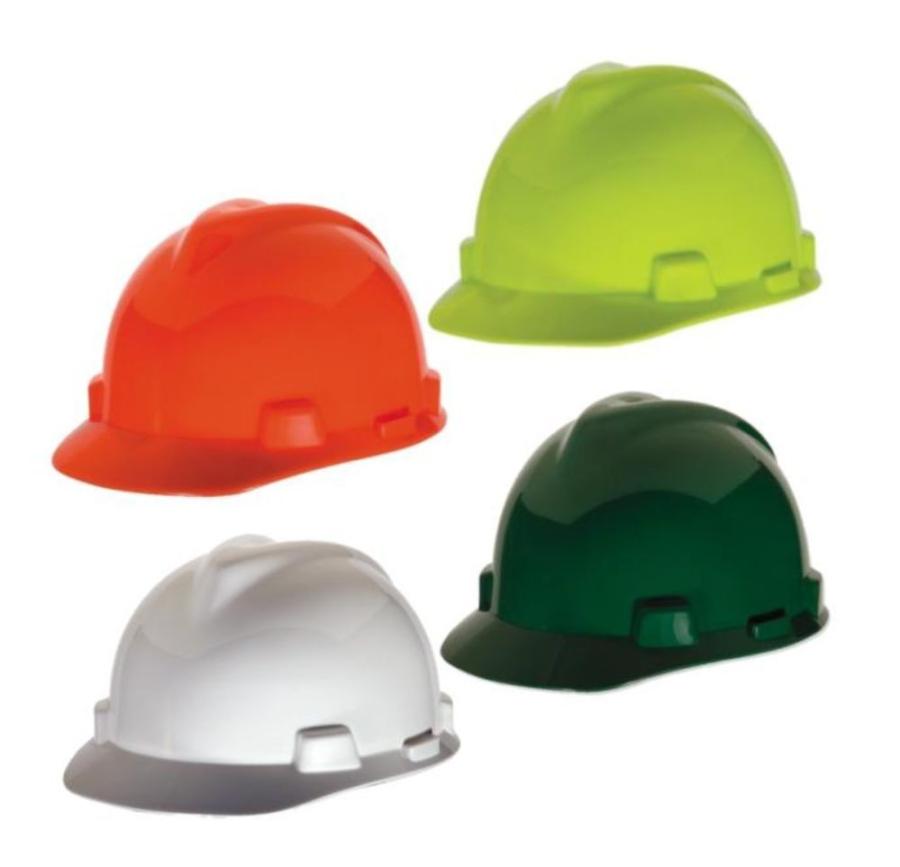 "Comfort is a big thing when it comes to PPE," said Wells Bullard. "It's only useful if it's worn. The last thing I want to see is someone taking off their hard hat to rub their temples or to wipe sweat off their brow. We have a versatile offering that is comfortable."

Samantha D'Uva, MSA's global manager of product public relations and influencer engagement, points to the latest safety trends in design, which are aimed at appealing to a broader audience. There is no-one-size-fits-all anymore (or one-color-fits-all). MSA is the only manufacturer to offer three different hard hat sizes and four suspension options.

"You can choose your size, how the hard hat sits on your head, what color it is (even hot pink!), and what accessories you attach to it," said D'Uva.

Established in 1914, MSA Safety is recognized as a leader in the development, manufacturing and supply of safety products that protect people and facility infrastructures. The company's product line is used by workers around the world in a broad range of markets, including the oil, gas and petrochemical industry, the fire service, the construction industry, mining and the military.

"When thinking specifically about innovation and the evolution of industrial head protection, the elements that have progressed the most are customization and comfort," said D'Uva. "If a helmet is more comfortable — workers are more likely to wear it — thereby ensuring compliance. Then, if you give the ability for a wearer to customize it — they then feel a sense of ownership and greater pride."

After gathering input from end-users in the field, one of the most common complaints is that the hard hats were too hot. Bullard designed the vented hard hat, the S62, which features a vented shell, allowing air to flow inside the hard hat, keeping the user cool.

What's Ahead for Hard Hats?

"We have a great responsibility to continue to innovate and to continue to keep our eyes and ears open to make sure we see unmet needs and unsolved problems and to continue to protect and serve the workers who go into hazardous work environments and have them be able to go home safely to their loved ones," said Wells Bullard. "We focus on providing our end user workers peace of mind. Our products are the last line of defense." 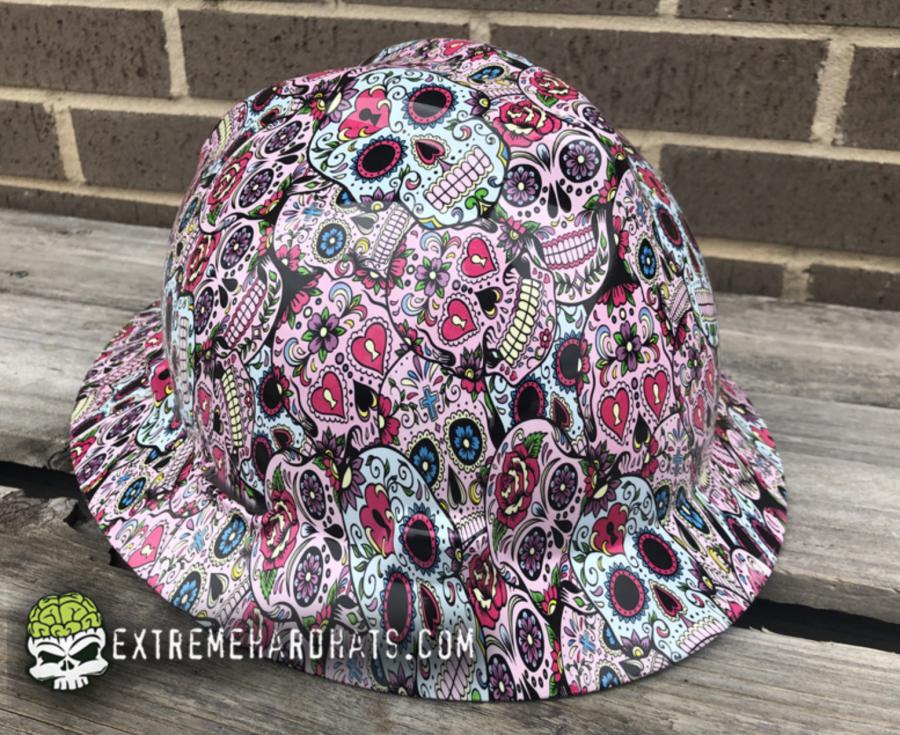 "The other key element is style. If you look at steel toe shoes, you can get a pair that look like ballet flats or hiking boots. People want to feel confident in what they wear," said Wells Bullard, who noted that they see changes in the design of hardhats and PPE with more women entering the construction industry.

D'Uva said MSA has seen a demand for a more modern looking helmet from millennials entering the trades.

Students from five different countries studying a variety of four different majors and minors at the Savannah College of Art and Design (SCAD) joined forces with Clayco to come up with a modernized hard hat design with elements that are sustainable, durable, lightweight, comfortable and safe. Within the team, the students' major studies included design management, equestrian study, graphic design and industrial design. The diversity of the team's skill sets allowed them to derive multiple design approaches to inventing original, complex and cutting-edge designs.

Putting the "Personal" in PPE

They also are an opportunity to show personality while abiding by OSHA standards. A chance to put the "personal" in personal protective equipment.

Hard hat manufacturers inventory goes beyond the usual solid colors as many offer an array of options and customization services to add flair. MSA's selection includes almost 30 different reflective and retro-reflective stripes along with 21 stocked colors. There also are non-stocked color options available for all MSA hard hats. 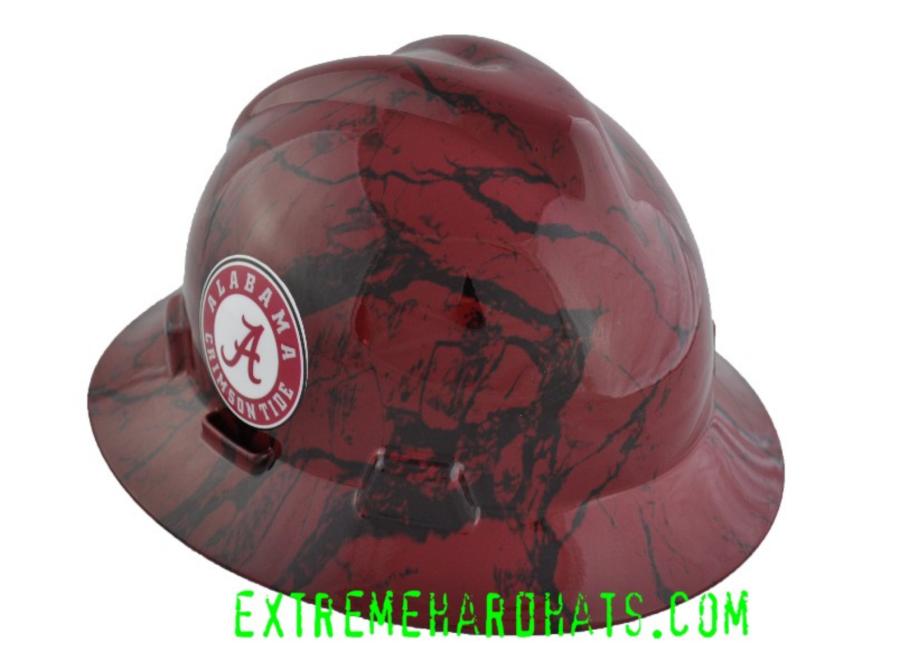 Officially licensed hard hats for college and professional sports teams lets you display your pride and perhaps identify fellow fans and rivals on the work site.

You won't find any boring hard hats at Extremehardhats.com. Their eye-catching designs range from camo, skulls and flames, animal prints, sports, and a "Just for the Gals" collection.

Simmons said one of the most unusual requests they received was for hard hats that hold water or Gatorade bottles so workers can stay hydrated.

"I'm not sure if they were using the hat more for work or recreation, though," Simmons admitted.

When the World Cup was in South Africa in 2010, the obnoxious vuvuzela might have made the most noise and headlines, but the team at Bullard noticed something else. Fans were putting decorations on their hard hats such as Barbie dolls, Legos and cultural elements. 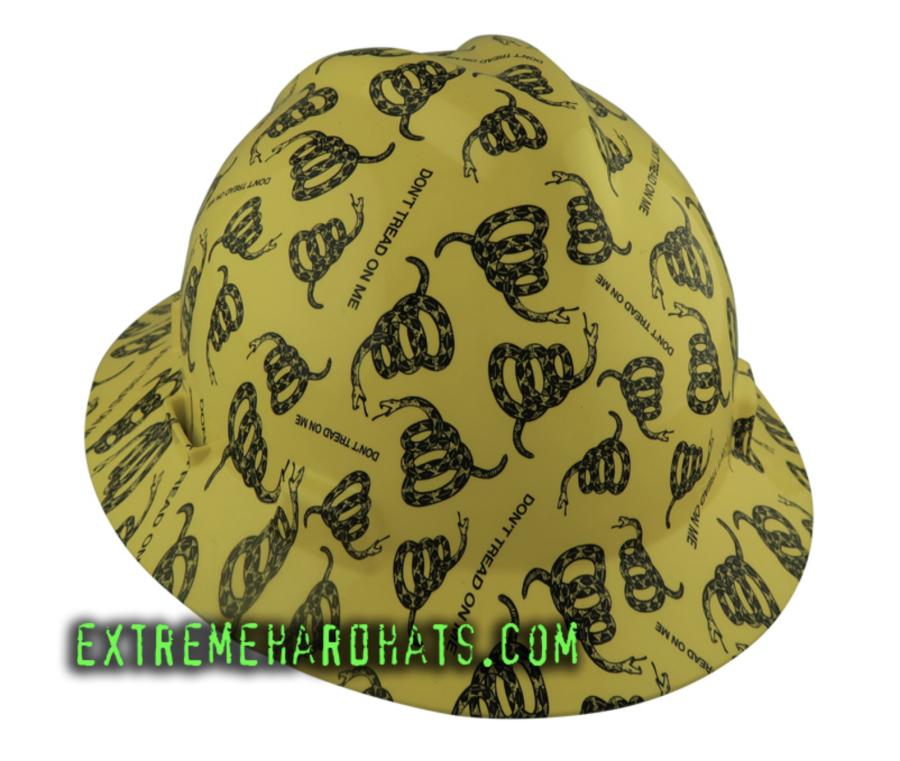 "It was an expression on a hard hat," said Simmons. "We personalize a lot of hard hats. Many of them go out customized with specific striping, logos and names of the end user. We love customizing hard hats."

"The designs that have had the most impact on us have been the ones we've done in response to a disaster or tragedy," said D'Uva. "From 9/11 to various hurricane recovery efforts, designing a custom hat for workers to wear while they rebuild their towns — and their spirit — is just one way we give back. We're honored to do it."