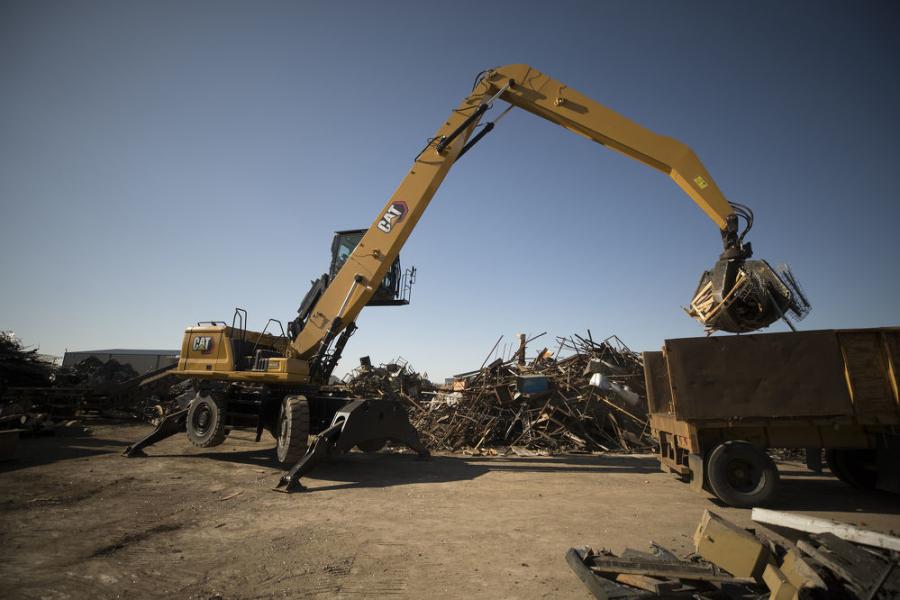 The combination of lower fuel consumption, reduced maintenance costs and additional power has made Michael Hitchcock a fan of the new Cat material handler.

If you asked Michael Hitchcock, owner of Hitchcock Scrap Yard Inc., how far he thought his company would grow roughly 40 years after investing in it, chances are he would have told you he had no idea.

"I was just finishing up my service in the Vietnam War, and I knew nothing about the scrap business before I got into it with my grandfather," he said.

In 1974, he purchased his grandfather's business as a three-man operation. Forty-six years later, he has grown it into an essential business that employs approximately 50 people and ships up to 10,000 tons (9,070 t) of scrap steel a month. 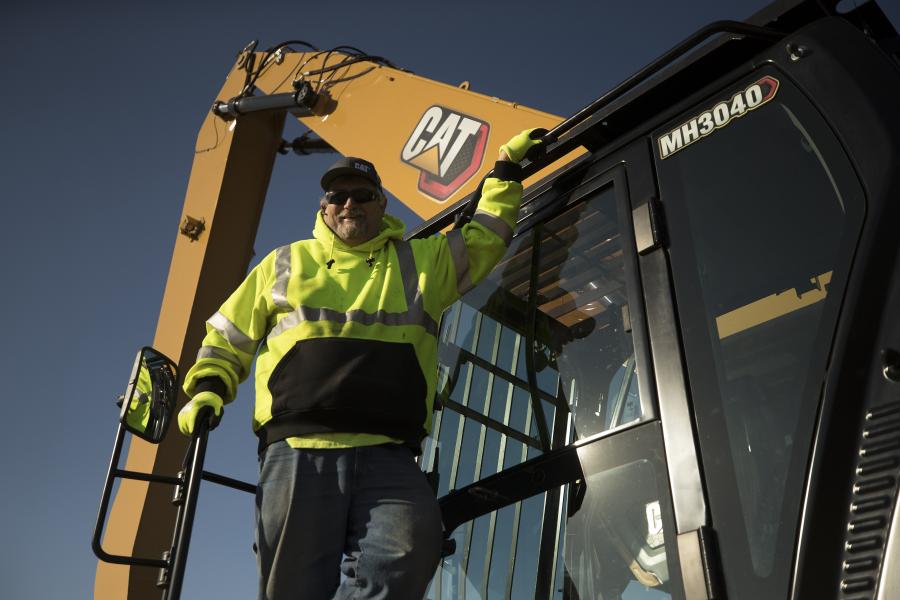 Throughout its history, this rural, midsize scrap business located in Canton, Ill. — population less than 15,000 — has maintained consistent growth, despite weathering some harsh economic conditions. The secret to the company's success, according to Hitchcock, is honesty.

"Your word and reputation are everything," he said. "We buy quality and treat our customers fairly."

Fueling the company's early growth was demolition work to access scrap steel for the business, which took workers across the country. Crew members and equipment traveled, among other places, to Texas for a huge demolition contract at a petrochemical plant; Chicago for a regional scrap project with a rail company; and Pennsylvania for more major demolition work.

During this time, the scrap operation developed a relationship with Caterpillar, buying from and selling scrap to the manufacturer's foundries. It also purchased Cat 245 and 350 series excavators for demo work and Cat 730 haul trucks to move material.

"When Caterpillar came out with their semis, I immediately purchased 11 of them for my business," recalled Hitchcock.

Vincent Migeotte, global product application specialist of Caterpillar, added, "We've developed a really good relationship with Michael, and he has been a faithful customer for many years."

Over the years, the company's focus has shifted from roaming the country for demolition projects to staying closer to its heartland roots and concentrating on its industrial customers.

"We still do demolition work, but we stay more local, traveling only as far as Peoria for projects," said Hitchcock.

"We serve a market area ranging from Chicago to St. Louis to the Quad Cities," explained Hitchcock.

A move to its current location approximately 20 years ago offered room for business expansion. The company's primary product intake is industrial ferrous scrap, along with new plate and structural steel. In 2018, the company added a warehouse, where it recycles aluminum, copper and tin, among other nonferrous metals. The warehouse includes a new in-floor conveyor for feeding a new nonferrous baler. 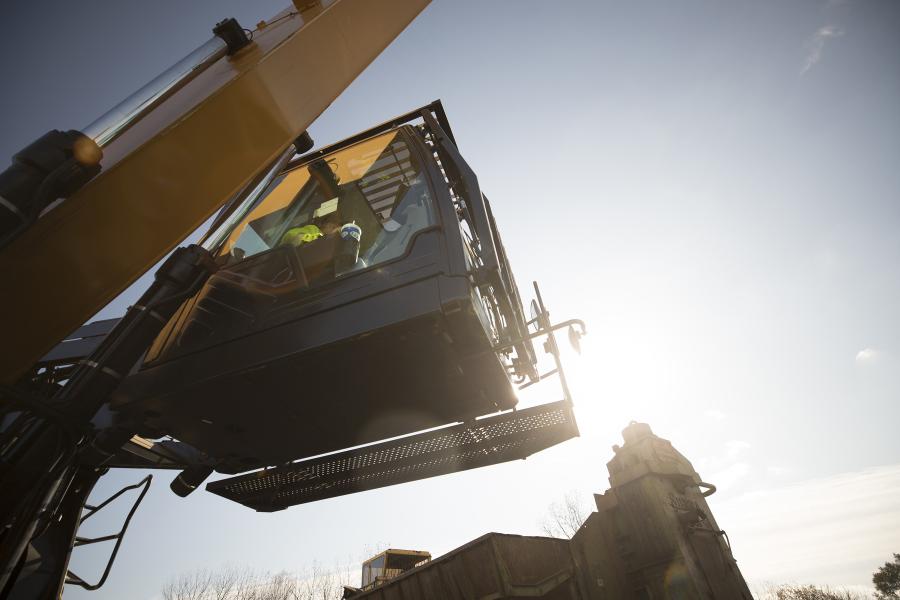 Its reputation for honesty, superior service and delivering a quality recycled product to its customers continues to fuel the company's growth.

"We use hand-held analyzers to check the grade of steel, so our customers who want low magnesium steel are sure to get it," said Hitchcock.

Much of the yard also is paved with concrete to be more welcoming to local peddler traffic without the fear of damaging tires. The pavement also makes it much easier for the company's wheeled material handlers to navigate the yard while taking care of the business of loading, unloading, sorting and stacking scrap.

Early on, the operation used modified 245 and 350 excavators with tracked undercarriages to process material. The late 1990s saw a change to specifically designed material handlers to increase operational efficiency with Cat M325 MH series machines. "We fell in love with the M325 material handler," said Hitchcock, "and we didn't think there would be anything that could match it."

The company's ferrous and nonferrous scrap handling strategy includes multiple tracked and wheeled machines, including Cat M325D, 322C and 318 series machines, plus 345 series models equipped with the latest Caterpillar hydraulic shear. The tracked models are predominantly stationary machines used for shearing and loading material into the site's two stationary shear and baler machines. Tasked with the duties of loading and offloading trucks and roll-off boxes, the wheeled units are constantly on the move.

Press Hitchcock to single out the most vital piece of equipment to his scrap operation, and without skipping a beat he will tell you it's the material handler.

"If one of those machines are down, then that part of the operation is down until the machine is back running," he said. 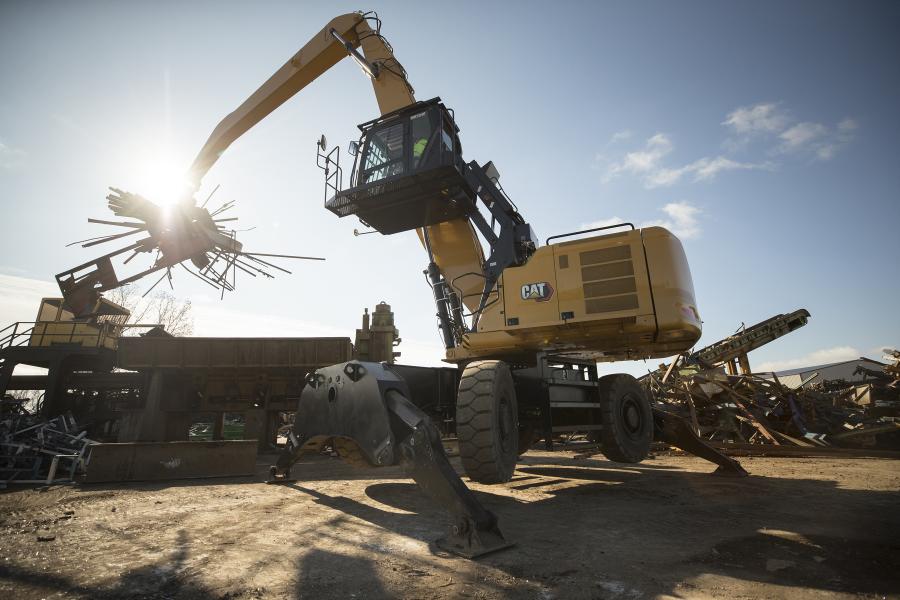 Therefore, when it comes to purchasing equipment, especially material handlers, the company buys quality. When Hitchcock learned of the new Cat MH3040 being introduced, he wanted to be among the first to put the machine to work.

"We were disappointed by the decision to end production of the M325 but were excited to hear of its replacement," he said.

The first thing workers noticed was the size of the new Cat material handler.

"The MH3040 weighs about 7,200 pounds more than the M325D L MH, which helps to add stability," said Matt Santee, product application specialist of Caterpillar. "Customers often mistakenly think they need a track machine for stability, but this is not the case."

Tom Allison, operator of Hitchcock Scrap Yard Inc., added, "I can pick something up, put it in front of me and drive it around without any tipping whatsoever. It's very secure and steady."

"We have added thick, multiplate fabrications, castings and forgings to the boom, stick and other high-stress areas to increase machine durability," said Santee.

Its new 202-hp, U.S. EPA Tier IV Final Cat C7.1 engine plus Smart Mode operation to match engine and hydraulic power to working conditions deliver one of the most essential advantages for the operation — fuel efficiency. Roughly 80 percent of the handler's operating costs are attributed to fuel, and Hitchcock reports working under load that the M325 machines went through 80 to 90 gal. of fuel per day.

"With the new MH3040, I can run it for two days and still have about a quarter tank left over," said Allison.

Hitchcock added, "We are calculating about a 40 percent fuel savings in our application, which is a huge savings. But the key is we are not giving up anything to get the fuel efficiency. It still gives us the same power and the stability is better."

In fact, the company is getting more, including a 12 percent increase in swing speed to help with truck loading efficiency. 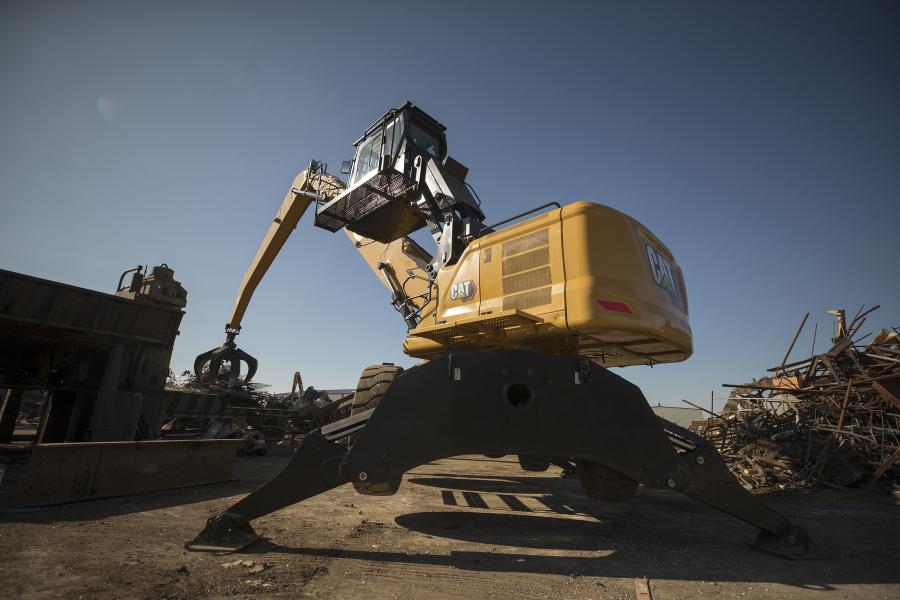 "We receive about 40 inbound trucks from our industrial customers and load 25 to 30 semis per day outbound. We set the outbound truck on one of our two scales and load it with 80,000 pounds of material in 10 minutes," explained Hitchcock.

Therefore, handlers offering fast loading and cycle times are a must for the operation. Equally as important is the need to get around the 24-acre yard to move, stack and sort material. That's why three of Hitchcock's machines have wheeled undercarriages.

"The MH3040's wheeled undercarriage gives the advantage of traveling around the yard at up to 11.2 mph," said Santee.

Hitchcock added, "One amazing stat is we haven't had to replace a wheel on any of our handlers."

The scrap company's new material handler is built on the Next Gen excavator concept that includes an upgraded, sound-suppressed cab that offers more room for the operator. New joystick controls, ergonomically located within easy reach to reduce fatigue, eliminates the center steering column to improve visibility and legroom.

"Sitting in the cab is very comfortable, and you have lots of arm room. No steering wheel makes it great because you have all that legroom," said Allison.

Also new to the cab design is a large, 10-in. high-resolution touchscreen monitor for machine control and monitoring the standard rearview and right-hand camera feeds.

"You just touch what you want on the touchscreen, and you can program the joysticks according to what settings are best for you," said Allison. "The cameras are the bomb. It makes it very visible to see people, machines, vehicles or whatever it may be."

Somewhat unique to the industry, machines come to this scrap yard to work but never retire. Hitchcock and the company's workers take pride in the equipment and work tirelessly to keep it operating in peak condition. According to Hitchcock, the company employs four service technicians plus welders and follows a stringent proactive service routine.

"Customers will realize up to 20 percent lower maintenance costs with the MH3040," said Santee.

The machine also has a new right-hand service platform to make it easy and safe to access the upper service area. One other critical component to fleet management is conducting regular fluid analysis, and S∙O∙S ports are easily accessed for quick fluid extraction for analysis by the dealer, Altorfer Cat.

"We don't have a lot of issues with the machines, but for oil analysis and when we get into an area where we are not familiar, Altorfer is quick to respond," said Hitchcock.

The combination of significantly lower fuel consumption, reduced maintenance costs and additional power have made Hitchcock a fan of the new Cat MH3040 material handler.

"It's hard to believe that Caterpillar has made something that is smoother and faster than the M325D MHs. This is truly a sweet machine," he said.