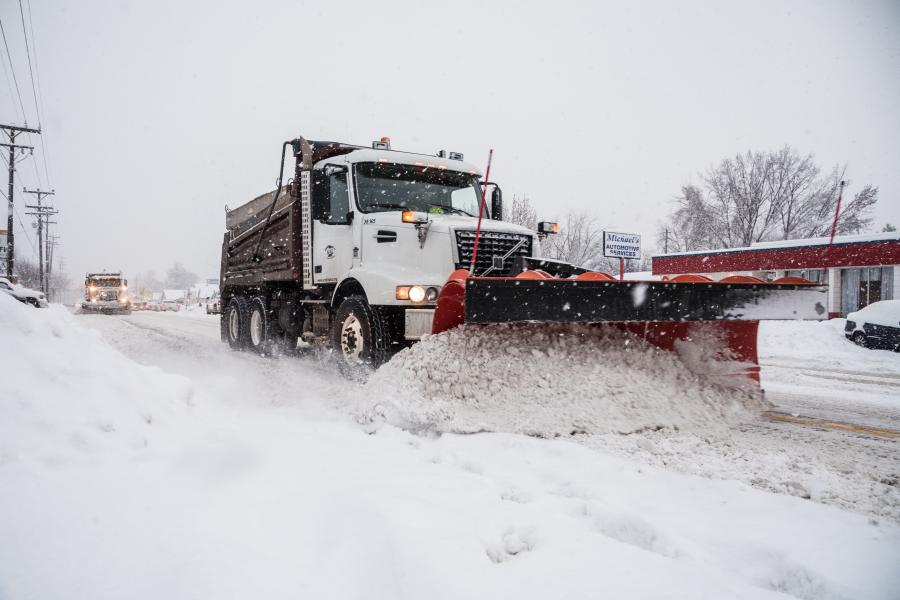 A decrease in temperatures and change in weather conditions usually has us all getting ready with our winter preparedness checklists, creating emergency kits and weatherproofing our homes. At the city level, officials and teams must grapple with so much more than that, ensuring roads and highways are always clear for motorists, and responsible for public safety no matter the snow, sleet, rain or other climate changes being experienced. 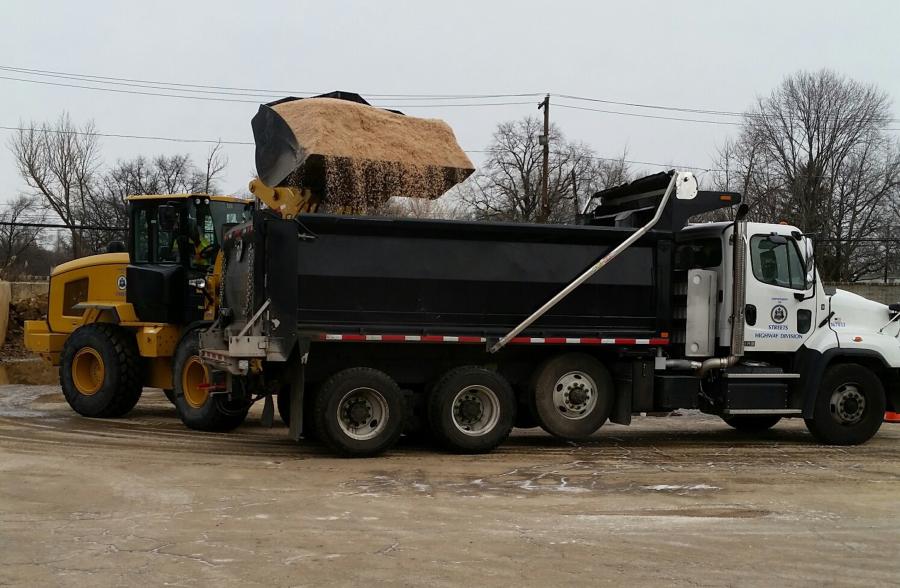 In the northeast, winter weather is always a challenge and unpredictable patterns in recent years have seen local authorities focus on training and technology to stay ahead of any surprises.

"The city of Philadelphia averages 18 to 22 inches of snow per year, the average temp is about 34 degrees. Most of our events are snow in the amounts of one to three inches and we may get one or two freezing rain events and one event more than six inches," said Steve Lorenz, chief highway engineer. "Philadelphia also is unique in our elevation; the southern half of the city is at sea level and the northwestern section is about 600 feet above sea level. Most snow events that are less than three inches are treated with salt. We begin planning for the snow season in August."

Over the last few years, the city has witnessed an expansion of its bike network with increasing protected bike lanes and those are included as part of their winter weather operations. The best way to treat is usually with a gator Lorenz said, but some lanes are wide enough to use a pick-up truck with plow. Other equipment for snow removal typically includes standard plows on heavy duty trucks (such as tri axles, crew cabs, sanitation) and pick-up trucks, and loaders, skid steers and gators.

Not too far away in Buffalo, N.Y., Susan S. Surdej, assistant to the regional director and regional public information officer of shares that the western New York area is susceptible to both general snow fall and lake effect snow, so they begin getting trucks ready for snow and ice in October, with the goal of having the entire fleet ready for snow and ice operations by Nov. 1 of each year. Prior to the onset of storms, they pre-treat roads with brine and other liquids which can help delay the onset of ice or snow cover.

"NYSDOT creates operational plans in advance of every major weather event, which allows us to deploy personnel and resources wherever they are most needed — both within western New York and across New York State," said Surdej. "The department utilizes state-of-art salt spreading equipment, and we make sure all the equipment is calibrated at the beginning of the snow and ice season, and then calibrated routinely throughout the season to ensure it is applying salt at the prescribed rates."

NYSDOT recently expanded its use of tow plows in western New York, which allows clearing two lanes of snow and ice with one piece of equipment. The tow plows attach just like trailers to the back of large dump trucks and can be hydraulically adjusted to swing to the side of the truck. This doubles plow width and allows two lanes to be cleared simultaneously, along with greater range of motion and control for operators.

Aside from using equipment such as spreaders, plows, loaders (front end, backhoe, etc.) and skid steers, a tried-and-true storm timeline is what keeps Boston Public Works on track with its winter weather operations. 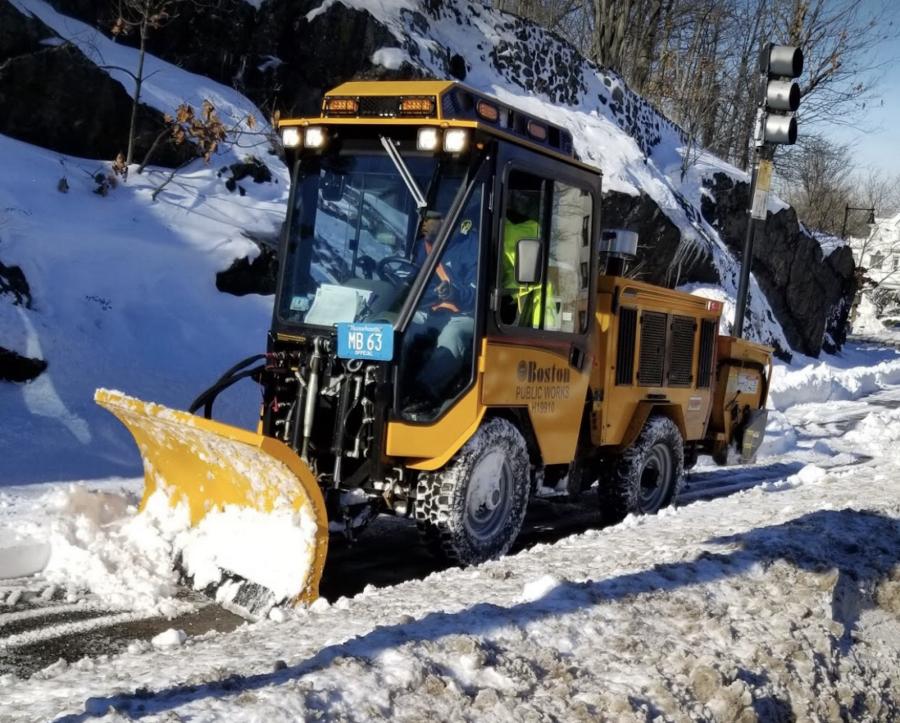 "Before a storm, we pretreat roads with salt. This effort helps handle the initial snow and ice. During a storm, we stagger our calls for plows. We want to make sure we are fully staffed and deployed before the height of the storm," said Chris Coakley, public information officer, Public Works Department. "We have the capacity to put more than 800 plows on the road during larger storms. As a storm winds down, we will emphasize widening streets, addressing areas that may not have been reached during a storm and re-salting the streets. After a storm, our focus is on improving safety and the flow of people and goods through the city. We remove snow on key corridors and pinch points, largely identified by the transportation department and other city departments."

Boston Public Works oversees treating and clearing 850 mi. of roadway when winter hits, so they start stocking up on salt starting in September. They have more than 100 pieces of in-house snow clearing equipment and can put more than 800 pieces on the road during larger storms and blizzards, including equipment to clear Boston's dedicated bike lane network.

In the southeast, although not as notorious as their neighbors in the north for winter weather events, there are still sufficient climate conditions as the temperatures drop, for authorities to take heed and prepare for any seasonal developments.

Todd Miles, Atlanta Department of Transportation (ATLDOT) interim director of maintenance operations, shares that the city of Atlanta typically experiences winter weather events that include sleet, snow and freezing rain. With the unusual amount of rainfall experienced this year, and if the trend continues and temperatures follow trends, they could face issues with freezing rain and icy roads. Each year, ATLDOT prepares for winter weather events with various training exercises during the later summer of the upcoming winter season.

"We initiate this process in mid-summer each year by scheduling our coverage shifts and designating equipment for our operations. This process includes determining which employees would be best suited for our various needed positions including drivers, spotters, inspectors, loaders of materials and safety monitors. Assessments are made if seasonal contractors will be needed to assist with our operations," said Miles.

Boise, Idaho, though, experiences its own set of challenges on the west coast.

"We get all types of winter weather here in Ada County, from heavy winter snow to freezing rain and everything in between. We start planning for our winter operations in July and part of that planning is getting our winter equipment prepared starting in August," said Lloyd Carnegie, maintenance manager of the Ada County Highway District.

Winter staff is mainly comprised of full-time employees and new employees are hired as positions become available to ensure they are always fully staffed, but as with most agencies during this time, he confides they have several vacancies available and not as many individuals applying for work, so they have to back-fill truck driver positions with other staff as required.

"We are currently installing AVL [Automatic Vehicle Location] systems on all our winter equipment in hopes that it would provide essential data to respond to citizen inquires but also help improve route efficiencies and material usage," said Carnegie. "We have a daily winter operations update that our on-call staff put out around noon each day. It includes current and future weather along with material inventory which helps keep everyone on the same page as to what is going to be coming and when, but also what is currently happening should we be in winter operations mode clearing snow."

Tulsa, also in the west, experiences a variety of winter weather, from a light snow to catastrophic ice in 2007 to 25 in. of snow in a 2011 blizzard. Equipment preparation for the upcoming winter begins as early as August. Winter events are addressed by city of Tulsa personnel and several departments such as stormwater, refuse, traffic, parks and the equipment management department, assist the street maintenance division to address winter events and maintain the equipment. 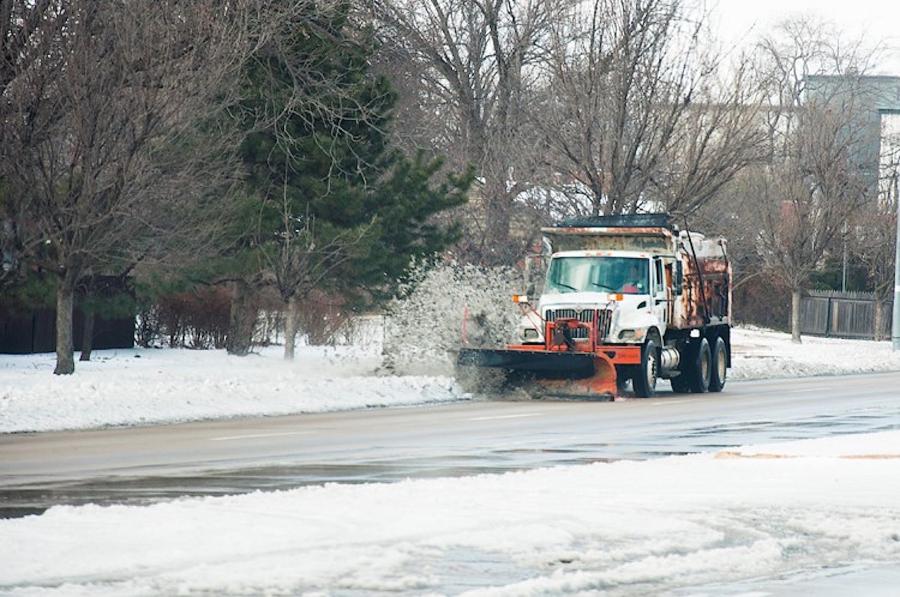 "We have had more winter precipitation the last two years than several years prior, and I look for that trend to continue," said Tim McCorkell, city of Tulsa street maintenance manager. "We began utilizing brine applications the last couple years, which has cut down on the amount of salt needed to address winter events. We now have two brine mixing stations located in our street maintenance yards — one in east Tulsa and the other in west Tulsa. We also have added new software and loader scales, which monitor the weight of salt being loaded in each truck and help to keep track of our materials on hand. We also have begun moving to carbide blades for our snowplows. Although carbide blades are more expensive than a regular steel blade, we have seen a major increase in production since we are not experiencing the down time for multiple blade changes during an event."

In terms of resources, it appears the city of Tulsa is well-prepped for winter weather with a plethora of equipment at its disposal. This includes 63 truck-mounted salt spreaders; four truck-mounted liquid applicator systems for brine application when appropriate; 51 truck-mounted snowplows (of the 63 trucks with spreaders, and four trucks with liquid applicator systems); and seven 4x4 pick-up trucks equipped with snowplows, among other machinery. About 210 employees (including drivers and support staff) are involved and crews are assigned to 35 specific routes totaling approximately 1,770 lane-mi., which is approximately the same distance as driving from Tulsa to San Francisco. CEG