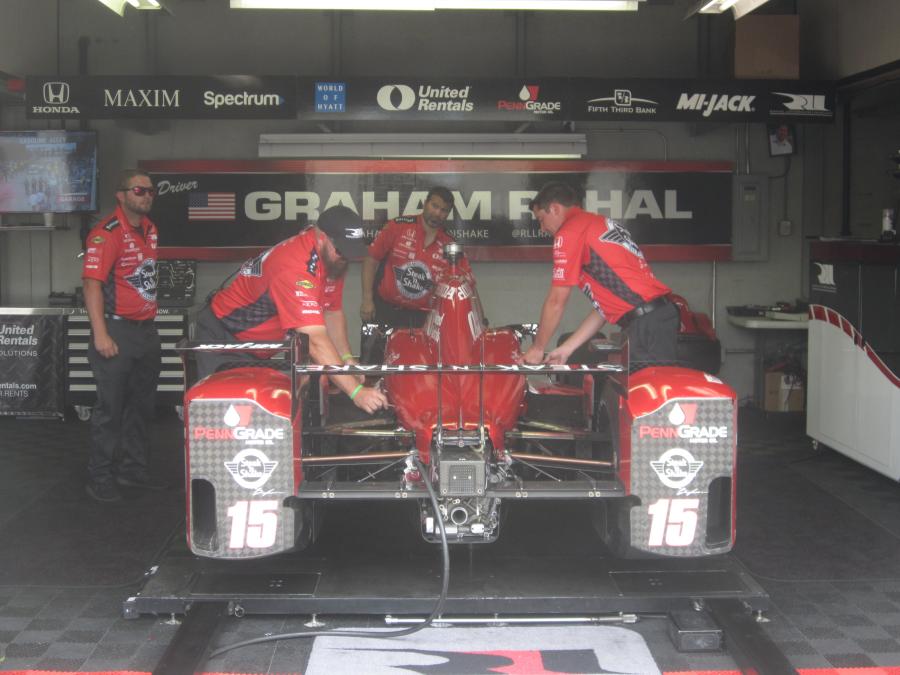 The technicians work on the Rahal Letterman Lanigan #15 car.

Howell Tractor & Equipment held an event during Indianapolis 500 qualifying (also called Armed Forces Pole Day) on May 21 for its customers and friends.

Guests watched as Team Rahal Letterman Lanigan (RLL) driver Graham Rahal, #15, and Oriol Servia, #16, competed on the famous oval as they set the starting grid for this year's 101st running of the world-renowned Indy 500 on Sunday, May 28.

Servia, born in Pais, Girona, Spain, has been racing professionally since 1998 and became a member of the Rahal Letterman Lanigan team in 2017.

During qualifying, Howell Tractor customers were given a behind-the-scenes tour of the RLL team garage, Pit Row and Gasoline Alley. Entertainment included tickets to the historical Speedway Museum, food and beverage service throughout the day, interactive games, exhibits and live music.

All guests of Howell Tractor and Equipment were accommodated and entertained in the Mi-Jack Products Tower Suite. Mi-Jack Products is the parent company of Howell Tractor and Equipment run by President Mike Lanigan, who also is co-owner of Rahal Letterman Lanigan with Bobby Rahal and David Letterman. Howell Tractor has been an equipment industry leader since opening its doors in 1943. They are renowned for their world class service, parts availability and 24/7 customer care.

Takuma Sato won the Indy 500 on May 28; Rahal finished 12th and Servia was involved a five-car crash with just 17 laps remaining.