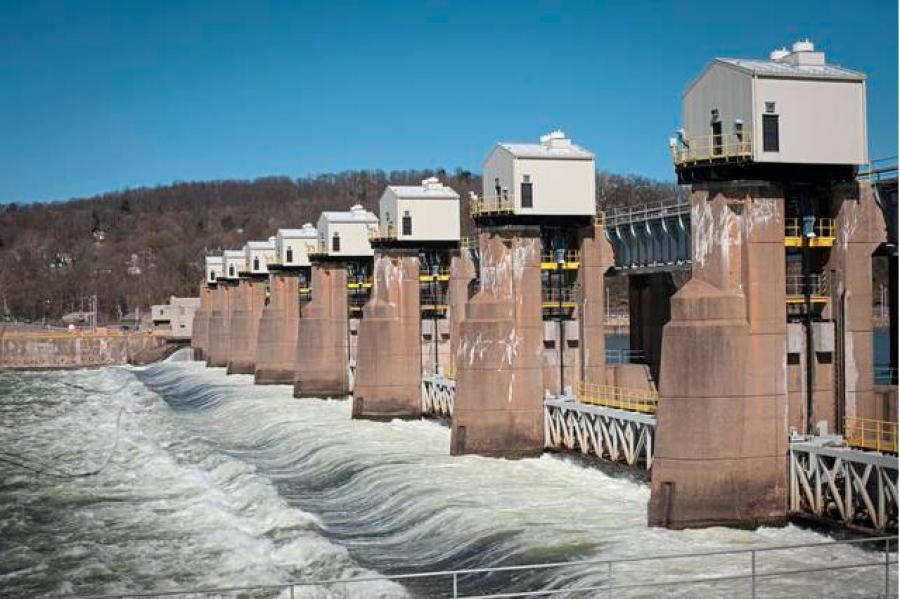 A hydropower plant planned along the Ohio River will supply electricity for county-run buildings over the next few decades, Allegheny County, Pa., Executive Rich Fitzgerald said Jan. 27, promoting the move as a landmark environmental commitment.

Under a 35-year agreement with Boston-based Rye Development, the western Pennsylvania county will buy renewable power from the 17.8-megawatt plant the company intends to build at the Emsworth Locks and Dams.

Construction is expected to begin late in 2021 and foster up to 200 jobs, while permanent staffing for the finished facility may be two full-time workers, according to the county.

The plant is set to open as early as mid-2023 and should not have any effect on recreation on the river, according to Alleghany County officials. Rye will pursue a low-impact environmental certification as it works to "ensure that the local river ecosystem is protected," the county said in a statement.

"We are investing in future generations and the environment to make the quality of life here in southwestern Pennsylvania and Allegheny County everything it can be," Fitzgerald said in a virtual press conference.

Announced a day after President Joe Biden signed executive orders to promote renewable energy and tame carbon emissions, the partnership with Rye has been in the works for a couple of years, according to Fitzgerald.

The county, which uses approximately 50,000 megawatt-hours a year to power operations and buildings such as the Allegheny County Jail and the Allegheny County Courthouse, expects to buy roughly 40 percent of the electricity generated by the plant, according to municipal spokesperson Amie Downs.

Rye CEO Paul D. Jacob said that that commitment is key to the project. His company intends to sell the excess power to other customers.

"With this action, Fitzgerald has signaled to other stakeholders in the community that new hydropower on existing dams will provide 24/7 renewable energy while also resulting in local infrastructure investment," Jacob said in a statement.

Rye is likely to rely on an infrastructure investment fund and money raised in the financial markets to cover development costs, estimated in the $50 million range, he said, adding that such facilities can last 80 to 100 years.

"When you step back and think about it, we're building what amounts to a five- or six-story building on the bottom of the river right next to the dam," Jacob explained.

The hydropower building at Emsworth is expected to sit about two stories above the water level.

Rye is developing 10 hydropower projects in southwestern Pennsylvania. The University of Pittsburgh has said it intends to buy all the power produced by a Rye plant planned for the Allegheny River near the Highland Park Bridge.

The company won favor with Alleghany County following a request for proposals in 2019, according to the county, which has committed to reducing its environmental impacts.

By relying on the Ohio River hydropower plant, Alleghany County each year will offset emissions equal to the power consumption of more than 3,400 households, Fitzgerald predicted.

It shows "there are untapped resources that we can engage that make not just economic sense but environmental sense and improve the quality of life and place," she said.