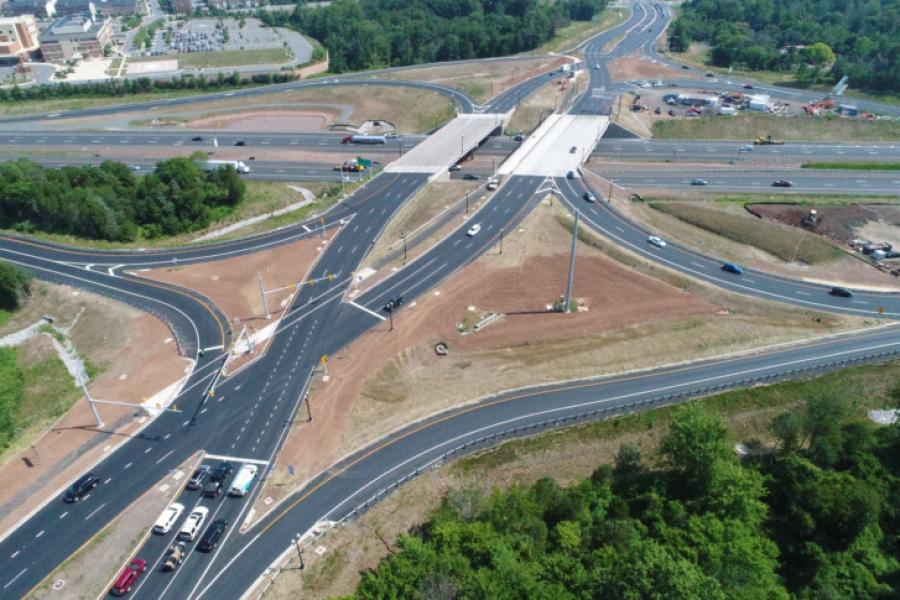 The Virginia Department of Transportation, the town of Haymarket and Prince William County celebrated the completion of Northern Virginia's first diverging-diamond interchange (DDI) on Aug. 22 at I-66 and Route 15. The new DDI will relieve congestion, enhance safety, operations and capacity, as well as accommodate forecasted traffic demand in the area.

The DDI's innovative design shifts vehicles to the opposite side of the road and eliminates left turns that cross oncoming traffic. Traffic signals at each end of the interchange reduce time spent at red lights and move twice the number of vehicles as a traditional diamond interchange. VDOT has completed DDIs in Louisa and Roanoke, and has two more in the works in Stafford and Blacksburg.

This project constructed two longer bridges to carry Route 15 over I-66 with two crossover intersections. It widened the bridges from two lanes to three, and also included:

• Ramp improvements, including a spur ramp to ease traffic flow from westbound I-66 to northbound Route 15 to westbound Heathcote Boulevard;

• improvements on Route 15 from just north of the railroad tracks to just south of Heathcote Boulevard;

• wider intersections on Route 15 at Heathcote Boulevard and Route 55, adding turn lanes to both;

• a 10-ft.-wide shared-use path on the east side of Route 15 for pedestrians and bicyclists; and

• aesthetic treatment of the bridge walls that pay homage to nearby Chapman Mill.

The $59 million project began in Sept. 2015 and was completed on-time and on-budget, under a design-build contract by Lane Construction Corporation of Chantilly.