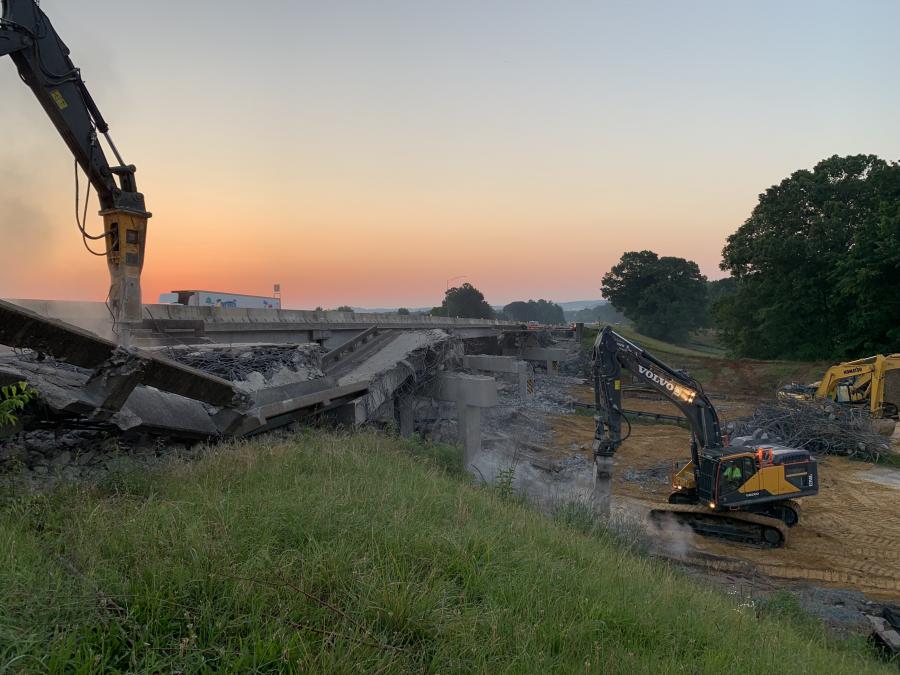 An $83.4 million project featuring an iconic cable-stay arch bridge is nearing completion in Tuscaloosa, Ala.

The Alabama Department of Transportation (ALDOT) is overseeing the construction, which calls for additional lanes on Interstate 20/59, along with a single point urban interchange (SPUI) on McFarland Boulevard (U.S.-82) directly below the interstate. 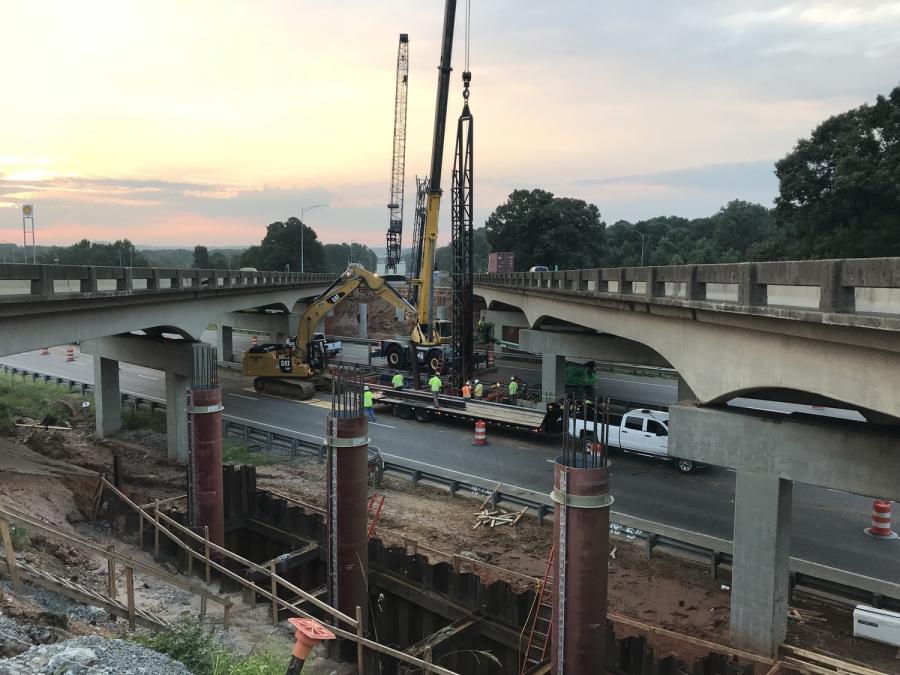 "This work is part of the add lanes and bridge replacement project from near Exit 73 to near Exit 77 that‘s intended to improve safety, mobility and commerce," said ALDOT west central region spokesman John McWilliams.

McFarland Boulevard is one of the busiest routes in Tuscaloosa, with an average daily traffic count of approximately 59,500.

"Tuscaloosa is one of the fastest growing major cities in Alabama, with a 10-percent growth over the last 10 years," said McWilliams. "Road improvement projects are important for this area."

The westbound arch for the new bridge was erected during the final weekend of January 2021. The eastbound arch will follow later in February.

"The arches are needed to hold the weight of the bridge over McFarland Boulevard and will allow the contractor to remove underneath supports," said McWilliams. "This design will allow for more space on the boulevard where the SPUI is being constructed."

The SPUI will reportedly improve travel time, allowing motorists to simultaneously turn without crossing the path of opposing left-turning drivers and moving more vehicles through the intersection while reducing potential conflict points.

Total closures on McFarland Boulevard, directly under the interstate, occur only on the weekend, to better accommodate traffic.

"We have law enforcement on site to assist with traffic, and the public has been patient with us," said McWilliams. "We try to give motorists as much notice as possible for future lane closures and provide alternate route suggestions, so that they can avoid work zones."

McWilliams said the elements have been an issue during construction.

"The rain, paired with COVID-19, slowed our projects," he said. "Tuscaloosa averages approximately 53 inches of rain, annually. However, from January 2020 through August 2020, Tuscaloosa had already accumulated 65 inches, according to rain gauges on the project."

The undertaking, an 80 federal/20 state split, began in January 2018, with Birmingham, Ala.-headquartered Brasfield & Gorrie serving as the general contractor. The global firm AECOM is the engineer of record for the roadway and bridge design associated with the 4-mi. I-20/59 widening from McFarland Boulevard to South of Buttermilk Road, and also the design along McFarland Boulevard.

According to Eddie Lobdell, associate vice president and Alabama transportation manager of AECOM, the company was responsible for numerous tasks, including coordinating aesthetic lighting, ITS, lighting and other signals.

"We've designed innovative interchanges and complex structures all over the world," Lobdell said. "We brought that experience to the table while designing this project for ALDOT. 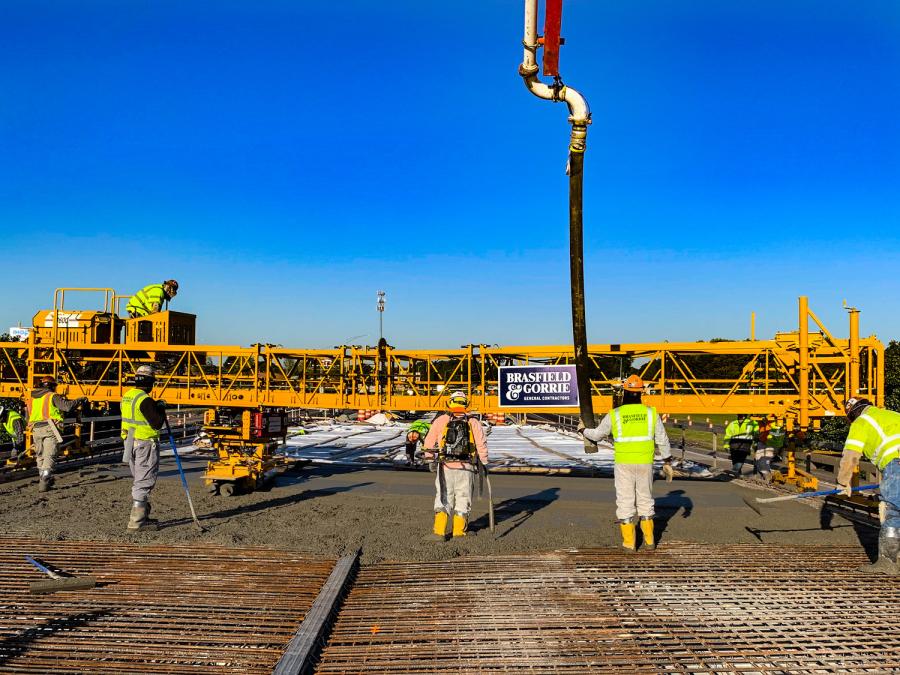 "The SPUI will provide at least 20 years of traffic operation improvements by consolidating the two signals at the exit/entrance ramp terminals into one single signal, with only two phases of operations. Since the arch bridge is single-span, no center support is needed along McFarland Blvd., providing better sight distance for drivers. There are other SPUI interchanges in other parts of the state; however, this one is unique because it's being done under a single-span bridge, which is not the typical layout. The SPUI design allowed us to increase the functional life of this interchange, and provide a safer interchange and simpler design."

Lobdell said the single-span arch bridge will ultimately support the I-20/59 lanes, but because of phased construction and the limitation of not being able to close the interstate, a temporary support is located within the existing median of McFarland Boulevard and will be removed once the load of the I-20/59 lanes is transferred to the arches.

"Due to the depth of the new tub girders, which are much deeper than the existing girders, the interstate was raised approximately seven feet to allow for minimum clearance along McFarland Boulevard This required temporary retaining walls along the median of I-20/59 for the increased elevation between the new and existing I-20/59 lanes.

"The sequence of construction is typically to widen to the inside or median first. Once that is complete, you can shift one of the directions of traffic to the new lanes in the median, then fix that side of the existing roadway, then shift that traffic back to their original lanes and repeat the steps for the other direction of traffic. This sounds simple in theory, but is a complicated design when you put variables like vertical differences, horizontal curves, design variances, etc., in the mix."

Lobdell explained that the layout and design provided the most functional life for the interchange, while also providing a landmark structure to be enjoyed for years to come.

"Not being able to close I-20/59 limits what can and can't be constructed," he said. "A major realignment of the interstate is not an option, so you must provide a new facility/bridge while maintaining traffic relatively in the same location. The arch bridge design provides this to the public."

Regarding the design process, a number of bridge configuration options were explored, but the main goal was to be able to construct the new bridge under traffic without closing I-20/59.

Early on, ALDOT sought the input from city officials and the University of Alabama concerning the color of the bridge and the aesthetic lighting, so that it could be a gateway to the city.

"AECOM provided multiple aesthetic features, which were presented to the university for their input," Lobdell said. "AECOM consulted with officials to ensure the proper shade of crimson red paint will be applied to the arches and girders. The tub girders that make up the bridge deck are six feet tall, so most people could stand upright in them. 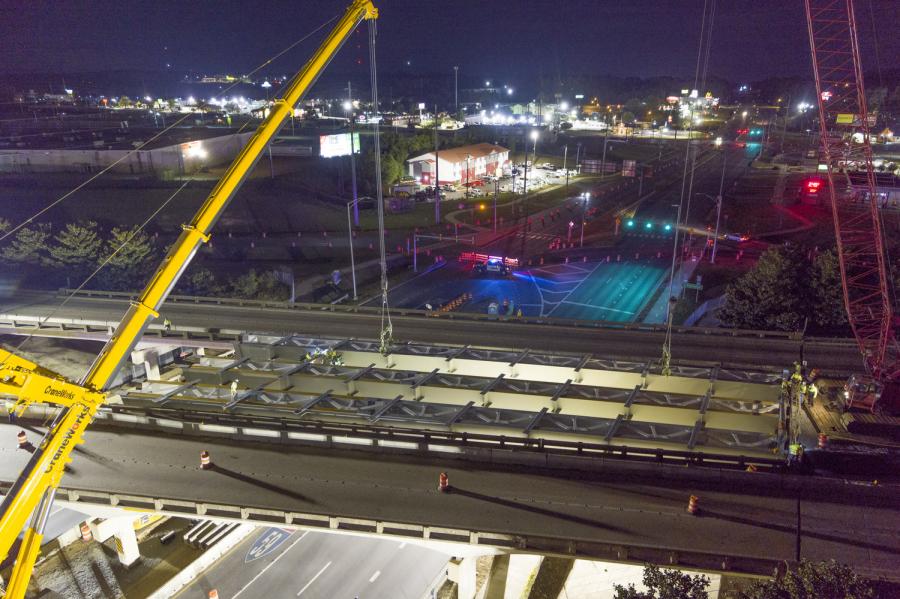 Lobdell said the aesthetic lighting will be tailored to the structure.

"They will have scenarios unique to the city, holidays and events that we celebrate," he said. "The daily commuters won't be distracted by them, but hopefully the passengers will enjoy the lights and recognize the visual representations of things like waves or fireworks."

The overall project required a great deal of planning. Lobdell said building additional lanes on Interstate 20/59, for example, is no small endeavor.

"You're talking about basically rehabilitating decades-old infrastructure and bringing it up to today's standards, while at the same time expanding the capacity of the interstate and surface streets. This involves a lot of moving parts, as well as coordination between stakeholders in the project."

Constructing the SPUI on McFarland Boulevard directly below the interstate also is challenging.

"One of the unique things about this interchange that most people will never know is that the bridge itself had to be designed as a two-span bridge for the temporary support in the median, and then be transferred to a single-span bridge once the arches were complete and ready to carry the load. Then, the center span can be removed and the final single span bridge left in place. That was necessary to construct the SPUI under the proposed bridge without having any structural support in the middle, as would be typical for an interchange."

Lobdell also noted that the project is located in a watershed, a tributary of the Black Creek River.

"It's listed as an Alabama Department of Environmental Management [ADEM] priority water, with active total daily maximum loads [TDMLs] for metal, turbidity and pathogens. The creek also has a community of citizens with great interest in protecting it, called ‘Friends of Hurricane Creek.' Many innovative measures were used to control erosion and stormwater on the project."

McWilliams added, "We're confident motorists will appreciate the project once the work is completed. By improving travel time and safety, this will help Tuscaloosa for many years to come. Tuscaloosa continues to grow at a rapid rate, and projects like this are definitely needed." CEG