Four years into the most costly project undertaken by the New Jersey Department of Transportation, work is on track as planned to finish rehabilitation of the Pulaski Skyway by 2020. 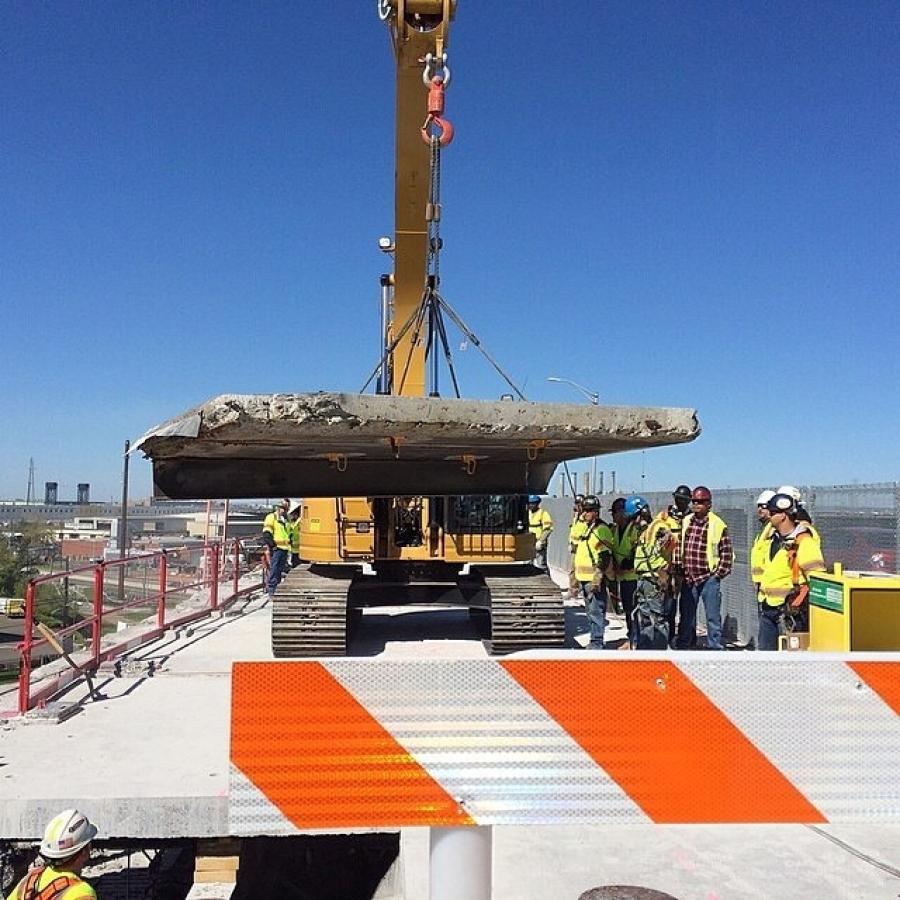 NJDOT photo. Four years into the most costly project undertaken by the New Jersey Department of Transportation, work is on track as planned to finish rehabilitation of the Pulaski Skyway by 2020.

Four years into the most costly project undertaken by the New Jersey Department of Transportation, work is on track as planned to finish rehabilitation of the Pulaski Skyway by 2020. The DOT is now preparing to reroute traffic on the iconic 84-year-old bridge so that re-decking can continue. The work on the bridge, which spans the Hackensack and Passaic Rivers and runs between Newark and Jersey City, is budgeted at $1 billion.

One of the biggest challenges is that the deck panels are not uniform.

“It's kind of like a jigsaw puzzle in sizes and shapes,” he said. “That's just the way the bridge is built. When this bridge opened in 1932, bridges of this nature were kind of new. You didn't have your big bridges yet. This was one of the earliest load bridges. One of the engineers of the bridge was originally a railroad bridge designer, and the Pulaski resembles a railroad bridge. It's very robust. That's one reason we are here 84 years later and still driving on the original deck. The new deck is actually replacing the original deck from 1932.”

The costs for contracts 3 and 4 were originally $126 million and $210 million respectively, but costs escalated after contractors discovered the steel beneath the decks had significantly deteriorated.

“Once we started doing the work, we found greater deterioration of the steel than anticipated,” Schapiro said. “The steel is under the deck and we couldn't actually see it until we got the deck up. That's the additional cost in contracts 3 and 4. We identified it in contract 3 early on, and it was incorporated into contract 4. They knew to expect it in contract 4 and made provisions for it.”

Workers also discovered a “tremendous amount” of deterioration in the steel beams.

“It looked like Swiss cheese,” Schapiro said. “Some of the webbing is just gone. When we were getting ready to implement the closures, we took reporters up and said, this is what we are dealing with, and people understood. This bridge has served us very well, and this project will extend the life of the bridge another 75 years.”

The Pulaski Skyway is labeled a “New Jersey Treasure.” It was featured in Orson Welles' “War of the Worlds,” and more recently in the opening credits of “The Sopranos.” The Skyway was awarded the Most Beautiful Steel Bridge by the American Institute of Steel Construction in 1932 and is named in memory of General Casimir Pulaski, the Polish-born hero of the American Revolutionary War.

“The bridge itself is 3.5 miles long,” Schapiro said. “When people think of large bridges, they think the Golden Gate or the George Washington Bridge, but those are much smaller. It's one of those bridges, certainly locally, that is iconic,” Schapiro said. “It looks different from other bridges. It goes over rivers and land and stays elevated. It's sort of this big industrial steel structure — very distinctive in how it looks. Growing up here, you always know it.”

The remaining six contracts include the full rehabilitation of the Kearny and Broadway ramps, steel repairs to the substructure and superstructure, strengthening and seismic retrofitting from Pier 61 through Pier 79, which includes the Hackensack River crossing, seismic retrofits and rehabilitation of the superstructure and substructure from Pier 79 to Pier 98, which includes the main span over the Passaic River, and painting the steel structure.