If Approved, West Side Crossing Project in Jersey City to Be Built in Three Phases 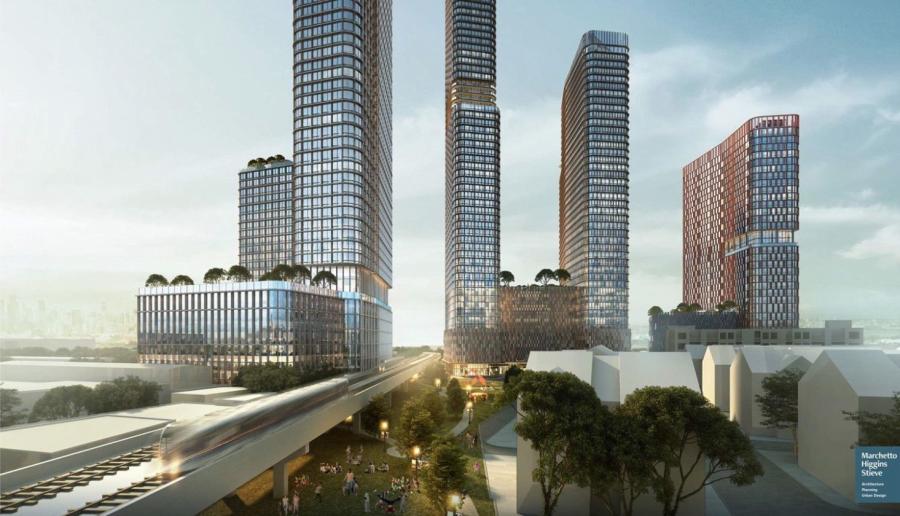 A total of 3,700 new feet of elevated track and a new rail station at the city’s Bayfront project are included in the expansion, an addition that will be worked into the sky-high redevelopment. (Marchetto Higgins Stieve rendering)

The company behind a three-phase development that would add residences, retail, amenities and greenery to an emerging neighborhood near the Hackensack River in Jersey City, N.J., has officially applied to move forward with the first part of the project.

Dubbed West Side Crossing, the entire project includes 3,079 residential units and has been designed by Hoboken-based Marchetto Higgins Stieve.

Brooklyn, N.Y.-based Bushburg Properties is the developer of the property.

Jersey Digs reported Feb. 28 that plans call for a revitalization of a group of properties near NJ Route 440 in Jersey City, which includes parcels along Water Street, Mallory Avenue and Culver Avenue. The plots total about 8.29 acres and are all owned by Bushburg.

The developer recently released renderings of the complex and have already submitted plans for the first phase that looks to subdivide the parcels and realign several rights-of-way regarding an extension of the Hudson Bergen Light Rail system, an endeavor currently under construction.

A total of 3,700 new feet of elevated track and a new rail station at the city's Bayfront project are included in the expansion, an addition that will be worked into the sky-high redevelopment.

Bushburg describes the four-tower West Side Crossing as a community with lots of amenities, like grocery stores, co-working spaces, and health and fitness outlets, as well as 360-degree views of the West Side and Newark Bay.

All Three Phases to Include Lots of Construction

Jersey Digs gave a brief outline of what is currently planned for the construction at West Side Crossing:

Jersey Digs noted that a presentation given before the Jersey City Redevelopment Agency (JCRA) last summer said that West Side Crossing's current proposal would dedicate about 50 percent of the site to future light rail and open space. Bushburg's four-tower visions can currently be built as-of-right, meaning that it already conforms to zoning and no deviations are required from the area's Culver Redevelopment Plan.

Bushburg submitted an initial application to Jersey City in early 2021 before the company's presentation to the JCRA. The planning board still needs to sign off on the proposal, but a date to hear the company's application has not been announced.