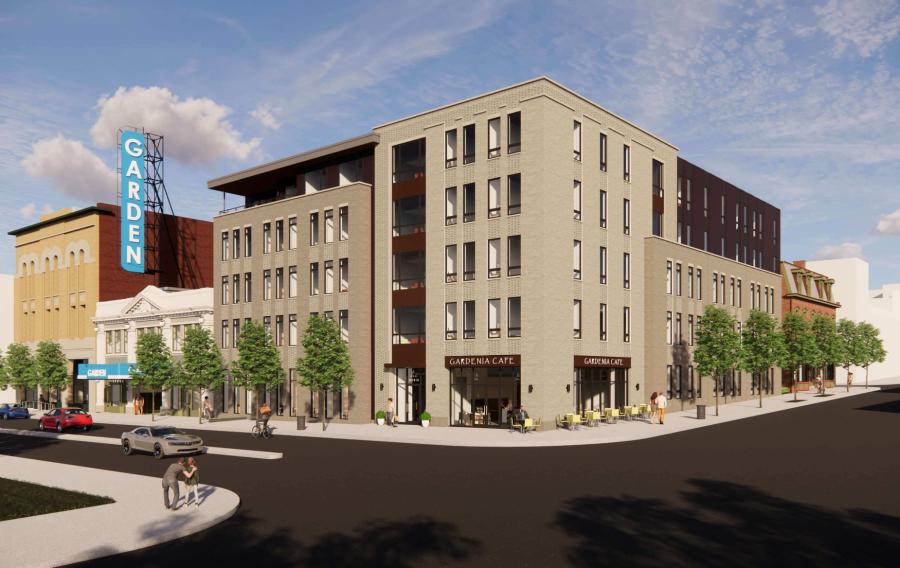 The new, mid-rise building will house 46 one, two and three bedroom living options. 6 W. North will be on the corner of W. North and Federal Street, connecting the Garden Theater and The Morton House. (Rendering courtesy of Garden Theater Block website)

For a new apartment complex next to North Side Pittsburgh's Garden Theater, Bill Gatti wanted to go with the latest state-of-the-art building material that is proving to be all the rage in the industry.

Not two-by-fours, mind you, but cross-laminated timber, which Gatti and his firm, Trek Development Group, based in the Steel City, wants to help reduce carbon footprints in the area.

Cross-laminated timber panels look like giant sheets of plywood but offer much more — a green alternative to traditional building materials like steel and concrete.

That is what caught Gatti's attention.

"It's considered a very green solution," he explained to the Pittsburgh Post-Gazette. "We're always trying to push the envelope as much as we can with green technology."

Gatti believes the 6 West North project may be the first, or at least one of the first, in the region to take advantage of the material.

Cross-laminated timber panels are made by gluing together pieces of wood cut from trees. The pieces are stacked in alternating directions and pressed together for strength. In fact, the finished product is strong enough to replace steel and concrete as building materials, even in taller buildings.

For the 6 West North project, Trek will be using a mix of steel, concrete and cross-laminated timber, with the timber component reserved for the building of ceiling and floors, according to the Post-Gazette.

In addition to the green benefits, the apartment complex will give renters of the planned 45 units an exposed wood ceiling in their bedrooms and living rooms. The floors, however, will be covered for acoustical reasons.

In all, about 20 percent of the five-story building will be made up of cross-laminated timber, said Kevin Wagstaff, a principal at the Perfido Weiskopf Wagstaff + Goettel architectural firm in Pittsburgh.

"We're hoping that people will leave their blinds open, and will look up and see the wood ceilings," he said.

Gatti said Trek and Q Development, another Pittsburgh company and Trek's partner on the project, decided to do a "hybrid" form of construction in an effort "to balance practicality and innovation as best we can."

He noted that using the cross-laminated timber will cost an additional $600,000.

But while the technology won't save Trek and Q money, Gatti explained that "it's a green technology and it's aesthetically appealing. That was the driver for us."

Trek is open to using it in future projects as well, he told the Post-Gazette.

"I think we're going to see how it looks, how the market receives it, and how it performs, and consider using it more," Gatti said.

Cross-laminated timber has been used on scores of other projects around the world.

They include an apartment building in Milwaukee, a recreation center at Clemson University in South Carolina, a 10-story residential building in London, an ecology education center in Maine and a five-story retail and office space in Denver.

Pittsburgh's 6 West North complex, at the corner of Federal Street and West North Avenue, will feature a mix of one- and two-bedroom units. The one-bedrooms will start at approximately $1,500 a month.

It is being built on vacant land that housed three Victorian-era structures that were demolished in 2019 by the Pittsburgh Urban Redevelopment Authority (URA) after being condemned by the city.

Construction on the new building is expected to be completed in February.

Trek and Q originally had planned to convert the 8,371-sq.-ft. Morton House next to the new apartment complex into six residential units.

But those plans changed when crews discovered structural flaws, including crumbling brick, that made the building unsafe to be occupied, Gatti said.

"It was like being held up by popsicle sticks," he said. "There was just too much damage."

After consultations with the URA and historic groups, Trek decided to demolish Morton House — which was made up of a pair of side-by-side structures — and build anew at the site.

Gatti described the situation as an "unexpected setback" in the development team's plan for the block.

"Everyone wants to save historical buildings," he noted. "But [there comes] a point that they're not viable anymore."

Michael Sriprasert, president of the Pittsburgh History and Landmarks Foundation (PHLF) and a consultant on the Garden Theater block development, said all the consulting parties agreed that the Morton House could be razed due to safety concerns.

At the same time, PHLF "strongly advocated for reuse of as much of the building materials as possible," an idea that Gatti said the developers are hoping to carry out.

In place of the Morton House, Trek and Q will build a three-story structure with 10 apartments.

The Post-Gazette reported that at the Garden Theater, a former adults-only venue acquired by the URA in 2007 after a lengthy legal battle, Trek and Q are constructing three apartments on the mezzanine level.

They also are trying to lease 5,000 sq. ft. of retail space on the first level. The two development firms have been talking to restaurants and other vendors about moving into the space.

"We're thinking it's probably going to be a restaurant," Gatti said.

As part of the Garden Theater project, Trek and Q refurbished and reinstalled the venue's sign, which spells out "Garden" and has served as a neighborhood beacon for decades.