Inside the Construction of New Goethals Bridge

The massive $1.5 billion project has been in the works since 2003, when planning started, but construction didn't begin on the bridge until 2014. 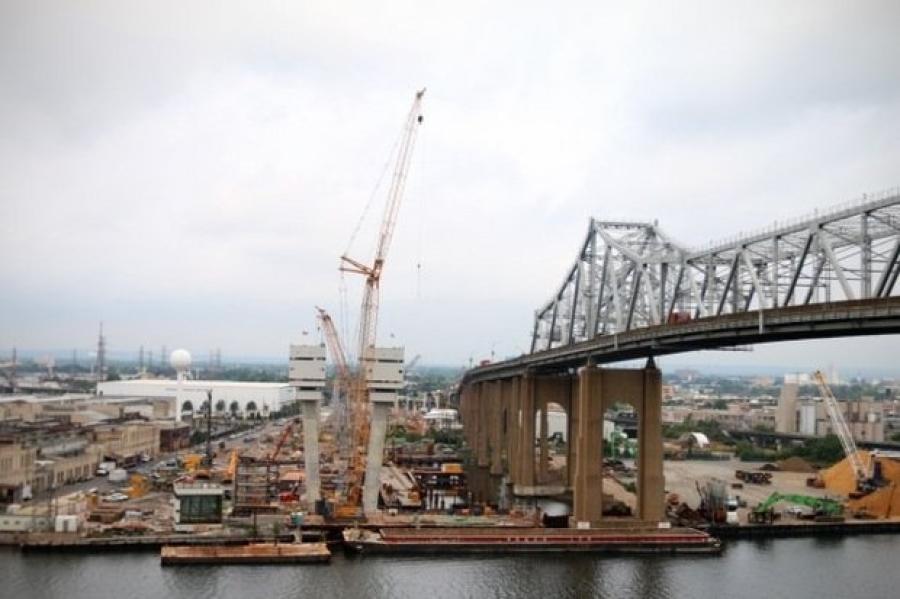 The existing structure, which first opened in 1928, is functionally obsolete, featuring four narrow 10-foot lanes with no walkway. (SILive photo)

While the Goethals Bridge Replacement Project may seem like it's never-ending, there's plenty of reason the Port Authority's first new long-span bridge in 80 years couldn't be built overnight.

The massive $1.5 billion project has been in the works since 2003, when planning started, according to James E. Blackmore, program director for the Goethals Bridge Modernization Program. Construction didn't begin on the bridge until 2014.

Blackmore shared the details that went into the extensive planning of the project during a tour given exclusively to an Advance reporter and photographer.

One such detail was the environmental precautions taken during the project.

On the tour, Blackmore pointed out drilled shafts as an example. The drilled shafts were used to "minimize the amount of excavation that's necessary to be done," said Blackmore. "That helped us over in New York because we had wetlands that we wanted to preserve ... on the New Jersey side it minimized the exposure to contaminated soil from the industrial sites here."

Blackmore also highlighted the durability of the bridge, which is designed to last for more than a century.

"The structure, overall, has a minimum of a 100-year design life," said Blackmore. "The major components, such as the towers and the main foundations are 150 years."

The existing structure, which first opened in 1928, is functionally obsolete, featuring four narrow 10-foot lanes with no walkway.

When the eastbound roadway is complete, the existing Goethals Bridge will be taken out of service and traffic in both directions will move to the new span. At that time, prior to the opening of the westbound span, the eastbound roadway will have four 11-foot-wide travel lanes available to the public -- two lanes in each direction.

Later, when both the eastbound and westbound spans are open, each roadway will include three 12-ft. travel lanes, plus shoulders.

According to the Port Authority, both the eastbound and westbound structures are projected to be substantially complete in late 2017, with full project completion, including demolition of the old bridge, projected for late 2018.

There will be a 10-ft. wide shared-use path for bicycles and pedestrians on the northern structure, facing New York City.

On the tour, Blackmore discussed in detail some of the unique aspects of the span, including the fact that it's a "P3," a public-private partnership.

"That's unique because the developer takes the assignment of risk for the project. They bid it as a team. The contractor works for the developer and the designer works for the contractor," said Blackmore. "What they do is they come up with a specific design, and the specific 'specs' and the work plan to achieve the schedule and the structure per the Port Authority's performance-based criteria. That's what's different about a P3."

In a regular project, "the Port Authority would have the design and the specs all worked out beforehand and say, 'Here -- build this,' " Blackmore said.

"This is the first and currently only transportation P3 that's being done by any of the area DOTs (New Jersey, New York, Connecticut) or the Port Authority," he added.

Another significant part of a P3 is the financing.

"If there's anything substandard about that maintenance, we can withhold some of those payments," he said.

Another innovative aspect of the bridge, Blackmore highlighted on the tour, is its distinctive design--provided by the installation of stay cables, which began this summer.

"The cable-stay structure is ideal for the size of the bridge and the number of lanes," Blackmore said on the tour.

A total of 144 steel stay cables, each up to 400 ft. long and 13 in. in diameter, will be installed on both of the new bridge's twin spans (72 cables on each span), according to the Port Authority.

Blackmore pointed out that each stay cable contains dozens of "strands" or bundles of steel wires that are tightly wound together and covered by a protective sheath. The entire cable is surrounded by a high-density outer shell.

The stay cables will connect the bridge's four sets of massive, V-shaped concrete towers to its twin roadways. The towers are each 272 ft. tall, according to the Port Authority.

As a stream of cars and trucks constantly pass over the bridge, the steel cables will transfer the weight of those vehicles to the concrete towers, which will in turn channel all of that compression force into the earth.

The intricacies of the bridge's design reinforce the length of the massive project.

"We see the bridge and we don't realize all of the engineering and all of the incredible work that it takes to build a bridge," said Rudy King, public information officer for the Port Authority of New York and New Jersey, as he took the view in from the bridge. "This is a spectacular structure. It's an engineering marvel."