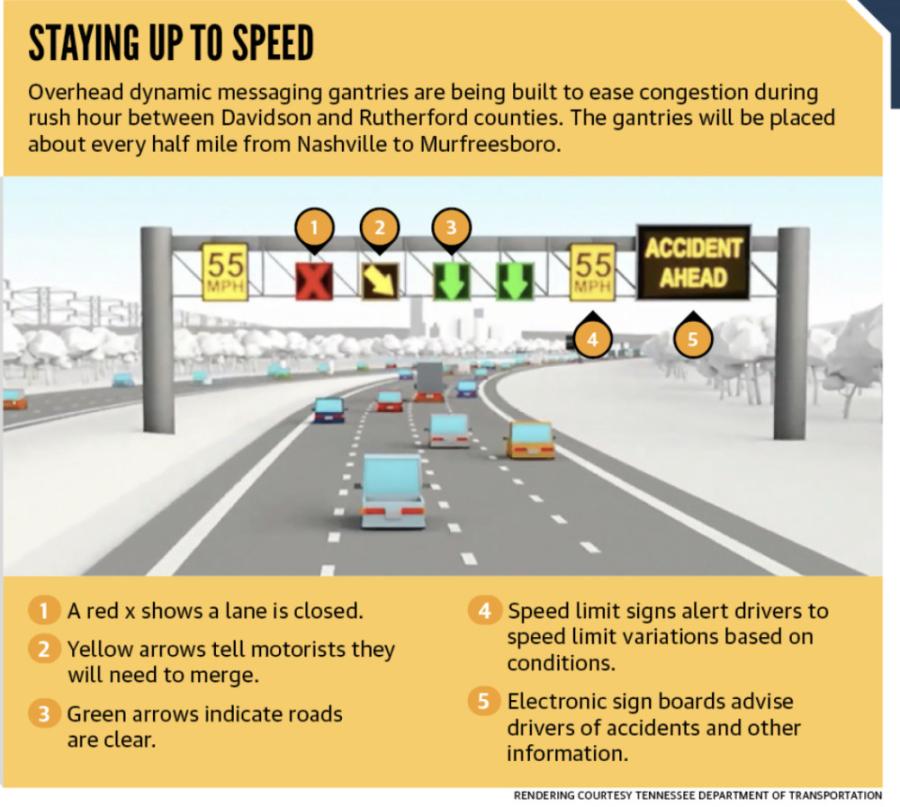 During a March presentation before the Rutherford Chamber of Commerce, Michelle Nickerson, a civil engineering manager for the Tennessee Department of Transportation (TDOT), explained the project's current $45.8 million phase — a portion of the total $109.5 million budgeted for the enterprise — would reduce delays due to crashes and use centrally-controlled dynamic messaging systems to give drivers advance warning of delays ahead.

"We are excited about the I-24 Smart Corridor project, because we believe it will help improve reliability and safety along [the interstate]," said Patrick Cammack, the Chamber's executive vice president of economic development, after hearing Nickerson's talk.

"As prospective residents and businesses evaluate our community and region, seeing this public investment in infrastructure is more important than ever, especially in the midst of our strong projected growth."

Community Impact (CI), a local online news service in Murfreesboro, reported May 30 that work began in early April to install a total of 67 overhead gantries every half mile in both directions within a 28-mi. stretch of I-24 from Exit 81 at U.S. Highway 231/Church Street in Murfreesboro to Exit 53 at I-440 in Nashville.

Further widening of the interstate is not financially feasible, according to TDOT, and does not permanently manage growing traffic.

"These improvements will not necessarily improve travel times, but they will make them more reliable," she told the newspaper. "This makes your commute more like a train schedule, where it runs ‘on-time' more often but does not necessarily make the train any faster."

Cutting Back on Traffic Jams is Goal

The I-24 project is intended to address traffic snarls in the area, where a 60 percent increase in vehicles trying to get through stretches of Murfreesboro-Rutherford County roadways has been recorded by TDOT since 2005, CI noted.

Included in the first phase of the Smart Corridor project, which lasted from 2018-21, were extensions of on- and off-ramps, a change intended to ease speedups and slowdowns on and off I-24 with fewer crashes, according to Hammonds.

She added that the installation of emergency pull-off areas should provide a safe median for disabled vehicles to get out of traffic, if possible, reducing the potential to block active lanes.

A TDOT analysis of 2015 congestion data attributed 55 percent of traffic congestion to heavier traffic volume, and 27 percent to incidents such as accidents or breakdowns.

"This helps to prevent the phenomenon of drivers tapping their brakes, which causes something called ‘phantom traffic jam,' which is a slowdown of traffic not caused by bottlenecks or a traffic incident," Hammonds explained.

CI reported that the new signage displayed on the overhead gantry systems will include a red "X" to indicate lane closures, in addition to yellow arrows to alert drivers that they must exit a closed lane, and green arrows to indicate that a lane is clear.

To prepare drivers for the use of this new signage, TDOT will produce videos about their meaning, according to Nickerson.

With the extra information, TDOT said drivers should be able to respond appropriately to avoid accidents or follow a suggested detour.

"The Integrated Corridor Management strategies will reduce the overall incident durations, which leads to shorter queues, and lowering the probability of secondary crashes," Hammonds explained to CI.

She added that by the end of 2022, transportation department engineers and technicians also will be gathering data regularly to get vehicle counts, record average speeds and collect other data to find areas for improvement.

TDOT plans to hire a new analyst later this year to manage the I-24 Smart Corridor system between Murfreesboro and Nashville from the state's Traffic Control Center.

Technologies to Extend to Local Roads

Around the end of 2022, further communication upgrades will allow TDOT to add the dynamic messaging signs onto Murfreesboro Road to provide updates about I-24 traffic, Hammonds said.

That phase, scheduled to wrap up in 2023, would include introducing ramp-metering equipment to control the pace of vehicles exiting and entering the highway.

"At least with the Smart Corridor project we will have some mitigation and notice if we choose to deploy a diversion," he explained.

With the area's population continuing to grow, and the resulting traffic projected to keep pace, Kerr said he believes using technology will be less costly than widening.

"Investing in traffic signal technology is an extremely good investment because it's pennies on the dollar [as compared] to major road [building] projects," he noted. "Don't get me wrong, you need to do both, but you have to maximize what you get from your roadway system."