Islanders Use Cranes to Move Historic Church in South Carolina


The Chapel on Pawleys Island, S.C., is no stranger to new places.

The structure was originally built in Georgetown, S.C., where it served as the Pentecostal Holiness Church until it was dismantled and moved onto the island in the 1940s, the South Carolina Picture Project reported. Then, the Georgetown Laymen's Association rebuilt it in 1946, where it has served as the island's only house of worship ever since.

In 2017, officials approved the Chapel for yet another move — but this time the help of modern construction equipment helped it stay intact. Due to years of storm damage, the Chapel was in need of foundational work, which meant lifting it up and putting it on rollers to take it to its temporary home across the street, South Strand News reported. 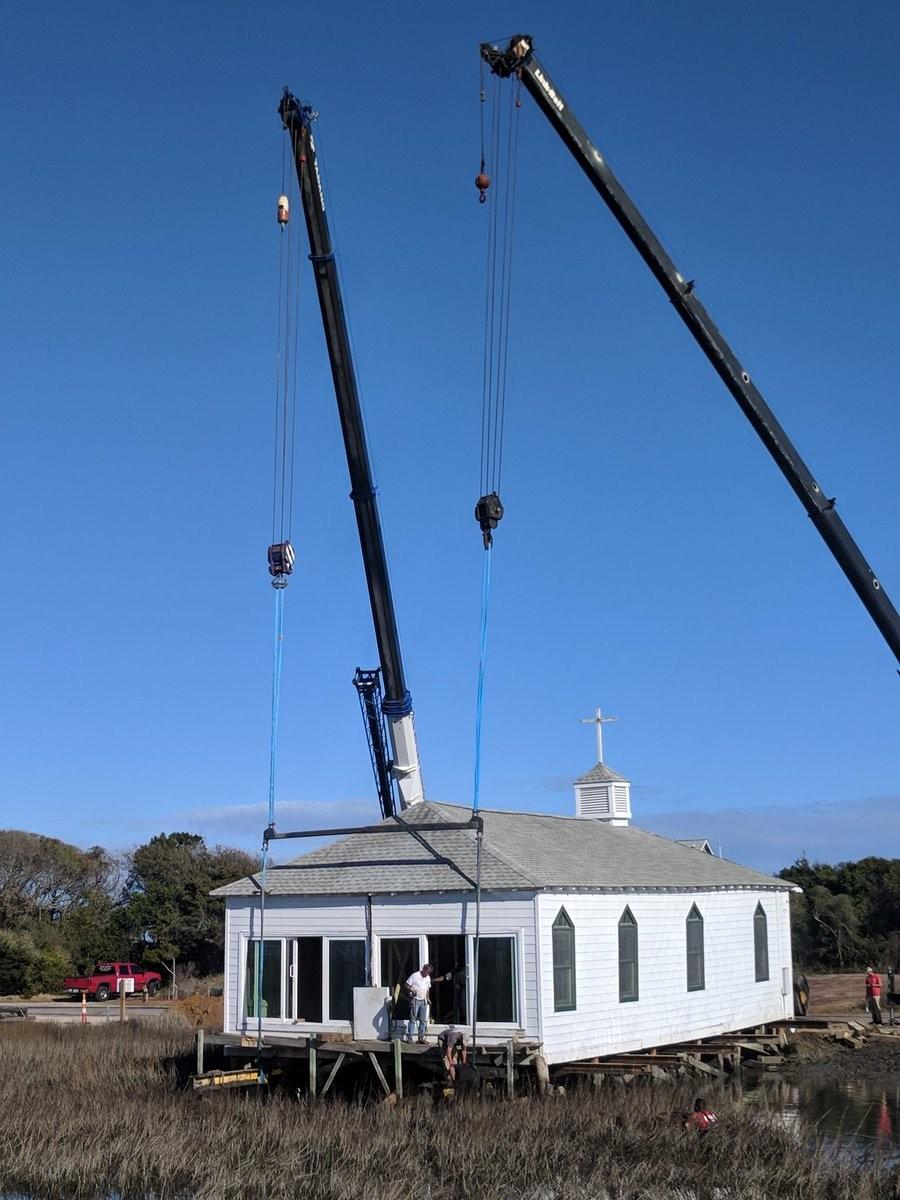 Jimmy McCants, a board member, said that although the board received authorization for the construction project in June 2017, they decided to wait to begin the extensive work until after the tourist season — and weddings which were booked through December 2017 — wrapped up.

"Nobody on the board had the courage to call these young ladies or their mothers," said McCants.

Before any work could begin, however, the project needed the OK from a few specific organizations.

"We had to clear [the project] through the U.S. Army Corps of Engineers (USACE), the Department of Health and Environmental Control (DEHC) and the State Historic Preservation Office," said McCants.

The USACE and DEHC were involved because the Chapel sits on pilings located on the edge of Pawleys Creek, the South Strand News reported.

On Feb. 23, officials closed part of Myrtle Avenue in preparation for the move. With the help of two cranes, crews attempted to lift the Chapel … but things didn't go exactly as planned.

In a tweet, the Pawleys Island Police Department said, "So, in true small beach town fashion it's been relayed to us ‘Chief, I think we're gonna need a bigger crane.'"

A few days later, on Feb. 26, crews tried again to move the Chapel — this time with a larger Liebherr crane. The second attempt worked, and the Chapel settled into its new temporary spot across the street while work began.

A little more than a week later, on March 8, crews used the Liebherr crane once again to move the Chapel back to its original spot on a freshly renovated foundation. Photos show that at a glance, you'd never be able to tell the structure had been temporarily uprooted — and that's a good thing. McCants said that more drastic changes to the structure, such as elevating it to avoid flooding, which it weathered during the last two hurricanes, wasn't an option, the Coastal Observer reported.

"We don't want to change the appearance. It's a Pawleys Island icon," said McCants.