The Ramp NW Flyover project includes a new flyover ramp to connect the northbound Dan Ryan (I-90/94) to westbound Eisenhower Expressway (I-290) movement. 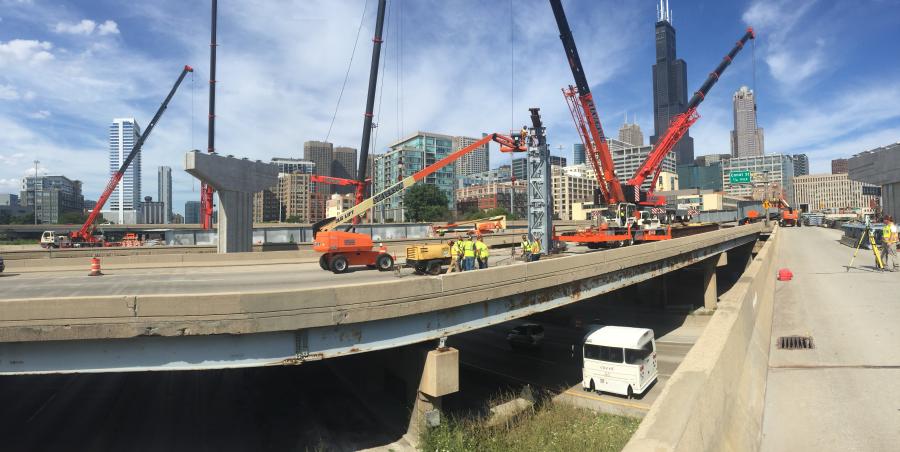 The reconstruction of the Circle Interchange (I-90/94 at I-290) in downtown Chicago — renamed the Jane Byrne Interchange after the former mayor of Chicago who passed away in 2014, has reached the midway point.

The reconstruction of the Circle Interchange (I-90/94 at I-290) in downtown Chicago — renamed the Jane Byrne Interchange after the former mayor of Chicago who passed away in 2014, has reached the midway point. The Ramp NW Flyover project includes a new flyover ramp to connect the northbound Dan Ryan (I-90/94) to westbound Eisenhower Expressway (I-290) movement.

The work being done by McHugh Construction, which began the project in October 2014, will be completed in March 2017. The existing ramp, beneath the new one, which spans the entire circle, will be demolished after the traffic is shifted to the new infrastructure.

The interchange is adjacent to the west end of the central business district, Greektown to the northwest, and the University of Illinois at Chicago to the southwest. Built in the late 1950s and early 1960s, the interchange links to the Dan Ryan Expressway (I-90/94) to the south, the Kennedy Expressway to the north (I-90/94), the Eisenhower Expressway (I-290) to the west and Congress Parkway to the east. It has been nicknamed “the circle” as the curving ramps appear to form concentric rings.

“The Circle Interchange is critical to the nation's transportation system, particularly for freight movement on our Interstate and arterial roadways, as well as to regional railroads and waterways,” according to the project Web site, “[and] serves as a vital hub for local, regional, and national freight traffic. Truck traffic has grown and has a far more significant impact on roadway capacity, levels of service and traffic delays than the 5 percent truck traffic that existed when the Interchange was originally designed.

“According to the American Transportation Research Institute and the Federal Highway Administration, the Circle Interchange is the slowest and most congested highway freight bottleneck in the nation with more than 300,000 vehicles traveling through the Interchange on a daily basis, and more than 1,100 crashes reported on average per-year. Built more than 50 years ago, the Circle Interchange has not had a major rehabilitation since its initial construction. High traffic volumes, single lane ramps and tight curves make the Circle prone to congestion, which causes it to operate under breakdown conditions for most of the day.”

It took two years to prepare the planning (Phase 1) and design (Phase 2), an initiative financed by IDOT's 2014-2019 Multi-Year Highway Improvement Program. The construction phase (Phase III) is being implemented in three stages. The First Stage (Cross Road Bridges) was the Morgan Street Bridge project (F.H. Paschen/S.N. Nielsen, Inc.), which included the reconstruction of Morgan Bridge over I-290 and CTA Blue Line, construction of retaining walls, relocation of existing water main and sewers, traffic signals, and roadway lighting. This was completed on October 6, 2014. The Second Stage (I-290/Congress Parkway), awarded to Kiewit Infrastructure Co., involved the complete removal and replacement of the existing bridge structure which carries Peoria Street over the Eisenhower Expressway (I-290). This has been substantially completed.

The Third Stage (the I-90/94 segment) has two contracts, with one awarded to Walsh Construction, which requires the complete removal and replacement of the existing bridge structures on Harrison Street “West” Bridge over the Southbound Dan Ryan Expressway (I-90/94) and Halsted Street Bridge over the Eisenhower Expressway (I-290).

The Ramp NW Flyover work has crews engaged in the construction of a new two-lane ramp and bridge that begins just south of Roosevelt Road on northbound I-90/94. The bridge —two 12-ft. (3.6 m) wide lanes with 10-ft. (3 m) inside and outside shoulders — crosses Harrison Street, I-90/94, I-290 and Halsted Street and the flyover ramp ends near Morgan Street on westbound I-290.

“Construction of Ramp NW Flyover will serve as a critical step in improving the Circle Interchange's overall safety, capacity, and geometric deficiencies,” according to the Web site.

Kris Harmon, McHugh's project manager pointed out that the “design challenges are the piers located in between the two expressways, both directions on each one.”

Traffic control is critical for the successful completion of the new ramp, and this includes various closures and detours to give construction workers safe places to work. But the impact of traffic is much deeper and not just for McHugh Construction.

“This is one of the largest traffic jam areas in the country,” said Harmon. “Staging in the design allows us to do our work and bring in materials and equipment, but it's a challenge because in every direction you're coming off a live interstate trying to merge into your construction limits. We do night work if there are certain activities that require lane closures.

“For instance,” he said, “back in August, September, and October, we had four weekends that we coordinated with the state and the city around all of the festivals and baseball and hockey games. We didn't want to impose problems on these events. We set up and shut down I-290 WB in two directions and we necked down I-94 NB and SB to one lane and did 15 minute closures as we erected 90 inch deep girders over the top of the expressways.”

Careful and serious planning and execution ensured the success of the work.

“We had two 300 ton and one 500 ton hydraulic cranes that we had to set up the week before because the closure only gave us so many hours to erect the steel and the girders were over 120 feet long,” said Harmon. “We had to erect six girders on each weekend. It was basically an hour-by-hour schedule. There was a lot of coordination with IDOT and the city's police and fire department, the Chicago Transit Authority, and emergency management teams for traffic. It was a major effort and major success.”

On an average day there are between 14 to 20 McHugh employees on site, along with a similar number of subcontractor personnel. The number is smaller due to constraints upon progress that could be made.

“There are many unknowns on this job,” said Harmon. “When you are putting in foundations, it not only affects the work that we are doing, but also the other contracts on the project — there are a lot of scheduling conflicts. There are two IDOT projects that our contract goes over and one underneath it. So if one contractor gets held up, it prevents us from moving at full stride and we've been working with minimal crews to get this done.”

To complete the contract, McHugh needs to erect steel on two units — about 600 ft. (182.8 m), place about 1,200 ft. (365.7 m) of bridge deck, and construct the entire west side of the job, which was delayed due to work on the other contracts. McHugh's planning team has been flexible in dealing with challenges and preparing revised schedules to maximize work times. This is important because the contracted delivery date of July 31, 2016 has been extended due to the delays.

IDOT, said Harmon, appreciates and understands the challenges that McHugh is facing and is working with them to iron out problems.

“Our immediate goals are to complete the bridge piers and retaining wall, erect the structural steel, and place the bridge deck,” he said.

The steel beams — ranging from 48 to 90 in. (121 to 228 cm) deep, a plate girder system, were fabricated in Gary, Ind., and have been delivered to McHugh. Materials are brought to the site on “as needed” basis due to the constraints, which has steel beams lifted off the trucks and immediately set-in-place. Minimal handling of materials is essential due to lack of space for onsite storage.

The tight site also limits the amount of equipment that is being used, which includes smaller RT cranes; Tadano 55 to 75-ton (49 to 68 t) cranes for pier construction; and large hydraulic Liebherr 300 and 500 cranes for structural steel installation.

“The equipment is not out here for long durations,” said Harmon. “Because of the cost of the equipment and that we are setting it in areas that are going to be occupied immediately after the activity is complete, we bring in the equipment essentially one or two days ahead of time, put it to work, set in steel and then take it down the next day.”

With so few pieces of equipment, mechanics are brought in as needed.

“We have not had any significant equipment issues on this job,” said Harmon, who added that the company rents equipment from dealers such as Stevenson Crane Services in Chicago, Ill., Chellino Crane in Joliet, Ill., and O'Leary's Contractors Equipment and Supply.

McHugh Construction has delivered many bridge projects for IDOT.

“We've not done anything to this extent in the Chicago area for about six years,” said Harmon. “However, we specialize in projects like this. We completed two bridges on I-88 over the Fox River in 2009, which had the same challenges with staging, live traffic, and working over a river. We've got a lot of professionals and skilled trades that are veteran journeymen. They take their work seriously and know what the goals are ahead of them, with safety being first and foremost.”