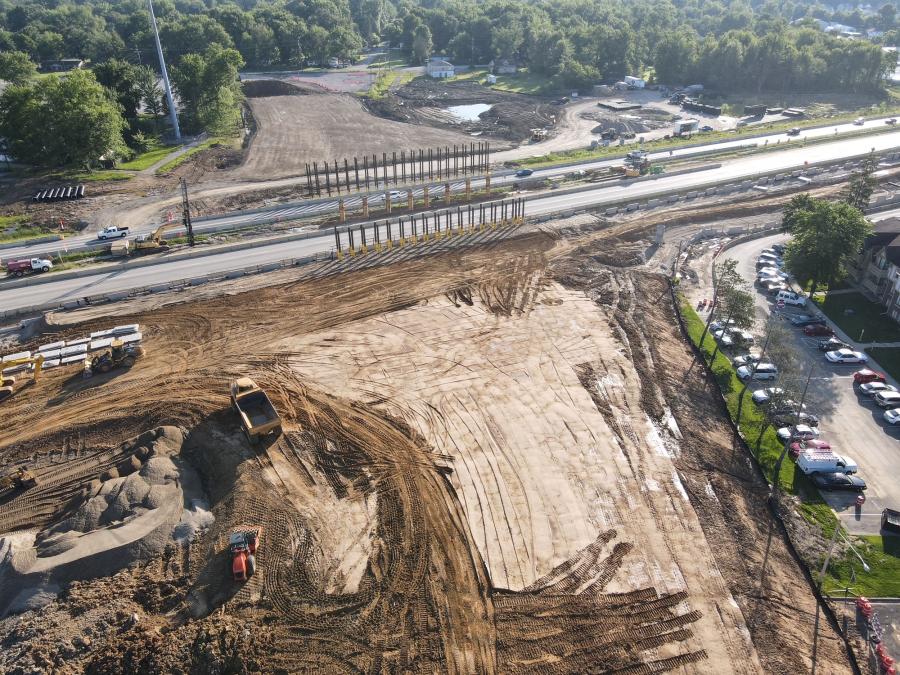 Site work has included a great deal of clearing and building demolition from the properties that were needed to build the project. (Chris Uckotter/WSP photo)

Despite weather-related delays, construction is progressing on a $42.5 million project being overseen by the Ohio Department of Transportation (ODOT). The work includes creating a new, full-service diamond interchange along SR 32; constructing a third westbound lane between the new interchange and Glen Este-Withamsville Road; and realigning Bach Buxton Road between Marian Drive and Clepper Lane. 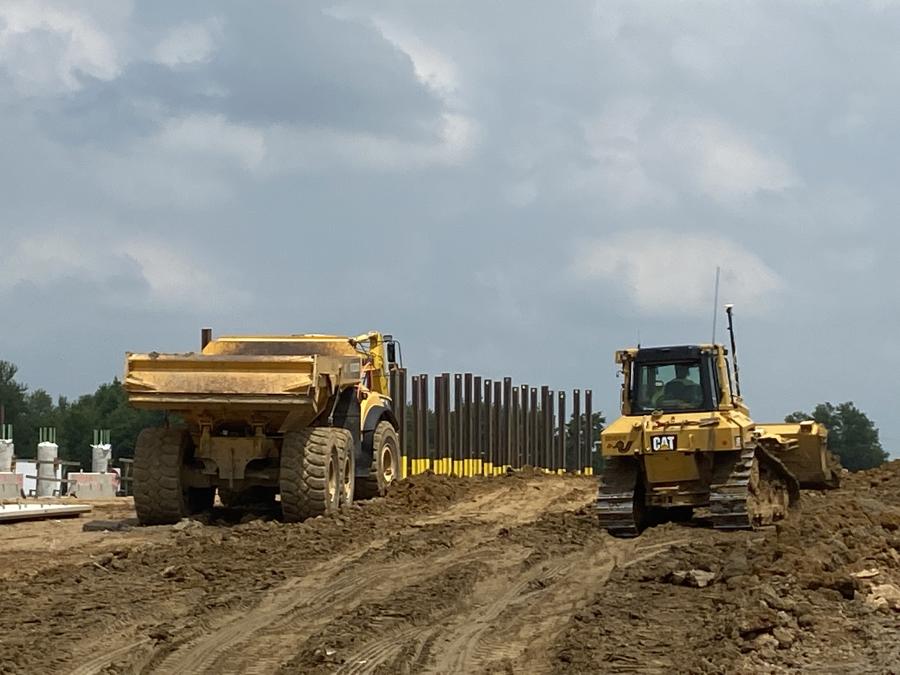 "Over the past 10 to 20 years, there's been a tremendous amount of growth along and in the area of the state Route 32 corridor in Clermont County, bringing substantial residential and commercial development," said ODOT spokesperson Kathleen Fuller. "As a result, there's been an increasing demand on travel and the transportation system, not only on SR 32, but on the local system of roadways. Several projects, including the SR 32/Bach Buxton interchange, have been developed to meet the needs of motorists, residents and business owners."

Fuller explained that project development takes place years in advance of actual construction and begins with a work plan that establishes priorities based on objective data that uses traffic volume, existing conditions, safety and other factors to help determine project schedules. This ultimately helps the team make better decisions when spending taxpayer dollars across the entire state.

"With the need identified and funding secured, it was important that we proceed with the project's full development through design and environmental, in order to bring this project to fruition in construction. Project completion will be rolled out in phases, with the overall completion schedule slated for late summer 2024."

Part 1 calls for construction of the new interchange. Part 2 involves widening the SR 32 West for the third lane, while Part 3 focuses on the realignment of Bach Buxton Road between Marian Drive and Clepper Lane. The work is part of Segment IVA of the Eastern Corridor program, a series of integrated, multi-modal transportation projects designed to make travel easier and safer between Greater Cincinnati's urban core and the communities in eastern Hamilton County and western Clermont County.

"While each Eastern Corridor project is functionally independent and provides improvements to the transportation system, Eastern Corridor projects also are interrelated and complementary to each other," said Fuller. "The projects are designed to support local goals for community enhancement, economic development and sustainable regional growth, allowing the region to realize the greatest benefit from these transportation investments."

At the site of the interchange project, the average daily traffic is between 43,000 and 44,000. This number grows to more than 55,000 at the interchange with I-275, 2 mi. to the west. Fuller noted that traffic on the mainline (SR 32) is being maintained currently in all lanes in either direction through traffic or lane shifts; however, closures are in place at the at-grade intersections within the project zone.

"These closures are part of the elimination of the at-grade crossings and traffic signals within the corridor, so motorists have become accustomed to the various detours that have been placed while construction of the interchange is under way. In addition, the Clermont County Transportation Improvement District [TID] and the Clermont County engineer's office completed projects to the parallel roadways to account for change in traffic patterns for this project. Impacts to the mainline will occur later in construction phasing to complete the overpass structure and ramps for the interchange, but once it's open to traffic, the traffic impacts brought about by the detours will be mitigated." 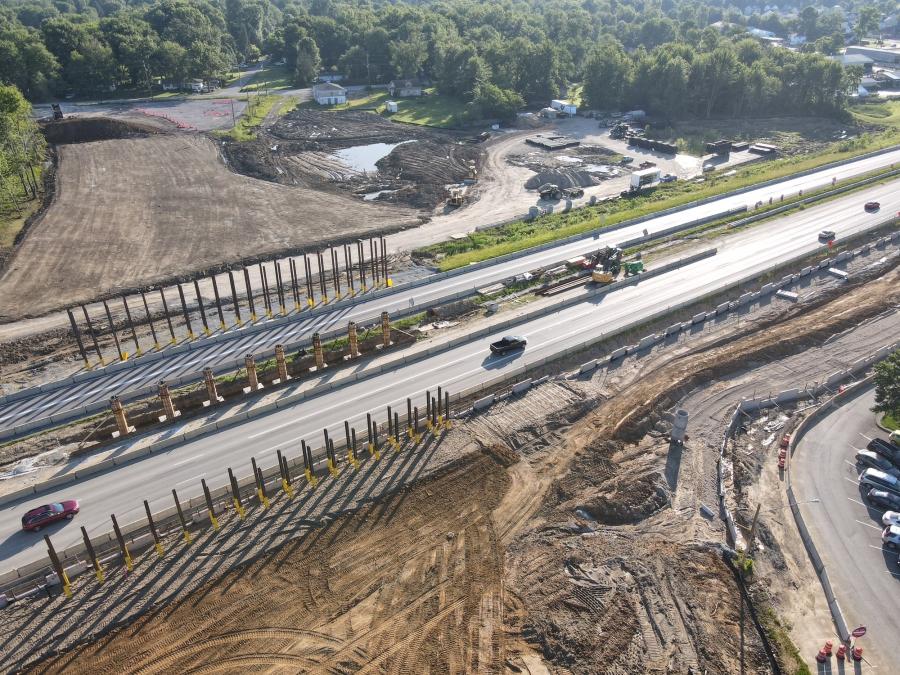 Fuller said construction of the SR 32/Bach Buxton interchange project is gratifying, because it's the next major improvement that will bring the Eastern Corridor closer to completion.

"While serving the traffic needs within the corridor, the SR 32/Bach Buxton interchange project also will improve safety by addressing two of Governor Mike DeWine's Top 150 Safety Locations, the Fayard Drive and Glen Este-Withamsville Road intersections, as well as multiple locations on the Top 200 Highway Safety Improvement Program's suburban intersections and non-freeway segments lists. Completing important projects like this that serve the needs of the transportation system and improve safety for those who travel through this busy corridor is key to enhancing the transportation network not only locally and regionally, but also statewide."

One of the biggest challenges on the project will be construction of the overpass structure for the new interchange, as well as the ramps, under live traffic. The project site is a fairly tight corridor, and there are always logistical challenges for access and phasing of the work to keep motorists and crews safe when constructing with roadways open to traffic.

Current construction includes MSE wall foundation preparation and construction, as well as drainage and catch basin construction; sewer line and storm water pollution prevention (SWPP) work; excavation and embankment work. Crews also are starting pile driving and working on pier foundations and columns. It's critical to achieve all the temperature-sensitive work before the next winter season arrives so work can continue throughout the winter months and ODOT can maintain its schedule.

In addition to all right-of-way being acquired before the project started, utility coordination and relocation, building demolition and overall site clearing (tree clearing and grubbing) have been completed. Ongoing work includes MSE wall excavation and construction, which are scheduled to be fully built in their entirety during Phase 1 construction. Pilings have been placed for all bridge foundations. Building of the new ramps that will serve the Bach Buxton bridge over SR 32 has started in the center of SR 32 and on both north and south sides of SR 32.

Creating a new, full-service diamond interchange along SR 32 has required a great deal of planning.

"Construction includes realigning Bach Buxton Road immediately east of the Elick Lane intersection and extending it over SR 32 to connect to Old SR 74 on the north side of SR 32. Tasks that are part of this include excavation, embankment work, drainage installation, MSE wall construction, bridge and ramp construction, paving, signalization [on Bach Buxton] and lighting."

Crews also are building a third, westbound lane on SR 32, between the new interchange and Glen Este-Withamsville Road. Widening to add a third lane in the westbound direction will include excavation and embankment work, as well as drainage, new pavement and pavement markings. A third lane in the eastbound direction was constructed under a separate contract three years ago.

Realigning and extending Bach Buxton Road over SR 32 and connecting with Old SR 74 on the north side is not without its share of obstacles.

"Concerns stemming from environmental, design and right-of-way were realized and rectified during the design process, so construction should not present any technical or design challenges," said Fuller. "However, construction over a heavily traveled route such as SR 32 does present its own set of challenges, for the goal is to build a safe, quality project and deliver it on schedule with minimal disruptions to motorists and residents."

Site work during the initial phases of construction has included a great deal of clearing and building demolition from the properties that were needed to build the project. One of the parcels included a gas station, which can present challenges from an environmental standpoint; however, this and the remaining parcels were cleared without any significant issues, and construction has begun at these sites.

Approximately 27,300 cu. yds. of material will be excavated for construction.

"We are following ODOT specifications for all excavation and embankment, so it's standard excavation with equipment and material; however, it has been challenging given the wet weather we've had this spring," said Fuller. "We've had several periods of heavy rain which have extended over numerous days, so getting equipment into the site, excavating the dirt and hauling from place to place while trying to maintain a clean work area, specifically on the SR 32 mainline, has been difficult." 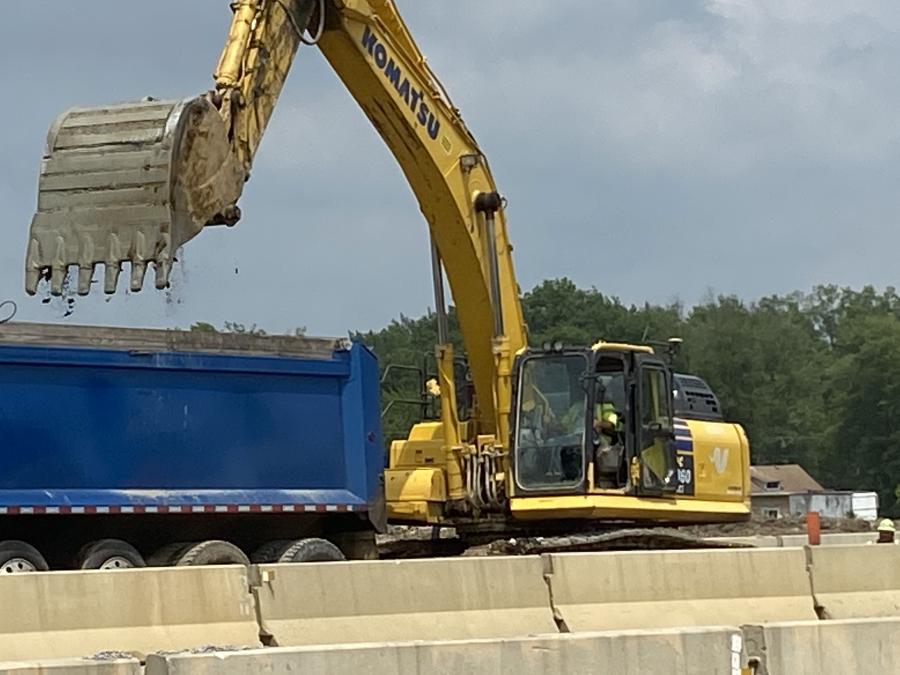 John R. Jurgensen Company serves as the contractor for the project.

"Established in 1934, John R. Jurgensen Company, has a reputation in the tri-state area for providing quality commercial and industrial work, and the company's staff have a wealth of knowledge and experience they bring to ODOT's projects," said Fuller. "In addition, the company has acquired asphalt plants and stone quarries, so this ability to check and test for quality control is an asset to providing a good product and service."

Fuller added, "Corridor improvements of this type, which serve to improve safety, reduce congestion and enhance not only the regional transportation network, but the state's entire transportation system, have a significant, positive impact on the motorists, residents and business owners. Completion of this project, which is just one part of the larger Eastern Corridor program, is incredibly satisfying as it marks the culmination of many years of hard work by so many people, and it brings a sense of accomplishment and pride for those who have worked on it from start to finish." CEG