“It just goes to show you that when you concentrate on doing your job well and safely, there are some pretty amazing opportunities that can result,” Spiekermeier said. 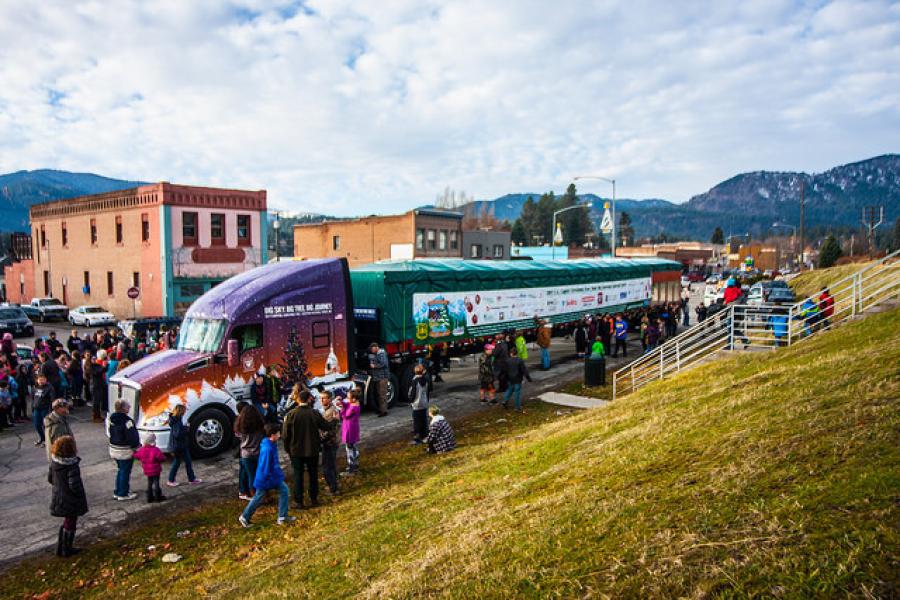 Weeks before the U.S. Forest Service announced the choice of owner-operator Larry Spiekermeier and Whitewood Transport to transport the 2017 U.S. Capitol Christmas Tree, Spiekermeier knew he and his company were strong contenders.

But Spiekermeier couldn't tell anyone, not even his wife, Mary Ann, or their three grown children, they were one of several finalists. And it wasn't easy keeping that secret from them. "When I first learned from Whitewood Transport's safety director (Brad Wilson) I might be driving the Kenworth T680 that would deliver the U.S. Capitol Christmas Tree, I was speechless," Spiekermeier said. "If you would have told me at the start of my driving career in 1968 that I would one day be stepping up to the plate to deliver 'The People's Tree' to the U.S. Capitol, I would never, ever have imagined it."

Choose Outdoors, the non-profit partner that assists the U.S. Forest Service with coordinating the annual tour, announced in May the choice of Spiekermeier and Whitewood Transport to haul the 79-ft. Englemann Spruce nearly 3,500 miles from the Kootenai National Forest in northwestern Montana to the U.S. Capitol. Local Kenworth dealer Motor Power Equipment and the Motor Carriers of Montana strongly recommended Spiekermeier, who is a two-time Motor Carriers of Montana driver of the year. And Whitewood Transport – the Billings, Montana-based heavy-haul and specialized equipment carrier to which he's been contracted for 20 years – is a multiple-year recipient of carrier of the year awards and the Great West fleet safety awards from the same Montana carrier association.

"It just goes to show you that when you concentrate on doing your job well and safely, there are some pretty amazing opportunities that can result," Spiekermeier said. "Not only do I get to deliver the U.S. Capitol Christmas Tree, but I also get to do it using this beautiful Kenworth T680, which has been a real pleasure to drive. The T680 has offered me and my wife an unbelievably quiet and comfortable ride since we started the trip from our home in Plains, Mont."

Following the harvesting of the tree on Nov. 7, Spiekermeier delivered the tree to a warehouse in Libby, Mont., where it was wrapped and placed in a box equipped with an 80-gal. water bladder to keep the tree hydrated during its trip. The box was then loaded on to a specially designed trailer that will carry it. The tour's first 14 stops were in various communities across Montana before leaving the Big Sky State on Saturday, Nov. 18. The tour continues with seven stops in North Dakota, Minnesota, Missouri, and Kentucky, before Thanksgiving. Its last stop is Joint Base Andrews on Sunday, Nov. 26, before the tree is unloaded and unwrapped for its final journey to the West Lawn of the U.S. Capitol on Monday, Nov. 27.

"If I were starting my business as an owner-operator instead of nearing retirement, I would definitely consider getting a Kenworth T680. The dashboard has a nice layout with all of the switches easily within reach, which makes driving so much easier. The driver and passenger seats and the sleeper are also very comfortable."

Spiekermeier's wife, Mary Ann, accompanied him as far as Grand Forks, North Dakota, and then Brad Wilson joined him and will ride alongside as far as West Virginia. After delivering the tree, Spiekermeier said he plans to stay in Washington D.C. and tour the capital until the tree lighting ceremont on Dec. 6.

Spiekermeier said the reaction he and his wife have witnessed from people at stops along the way as they see the truck really speaks volumes. "When they see this beautiful truck, they grab their camera phones, race out onto the sidewalks and roadsides and point and take snapshots and videos," he said. "The truck is really quite attractive and its colors, particularly against fallen snow, are striking. Kenworth did a fantastic job of designing and equipping it."

Spiekermeier said while it was his intention to retire four years ago, his love of driving kept him from doing that. "I love being out there on the open road so I'll probably do this for a little while longer. Still, at age 70, I am finding that doing heavy haul can be much more physically demanding than it was when I was younger. Since you have to be constantly up on the trailer adjusting and securing loads, it's really a job for younger guys."

Mike Wilson, owner of Whitewood Transport, and his son Brad, certainly hope they can keep Spiekermeier as a contracted driver for a little while longer. Spiekermeier has more than 1.6 million miles of incident-free driving for Whitewood, plus another 1.9 million incident-free miles driving for several other companies before joining Whitewood. With that pristine 3.5 million mile driving record and an unprecedented second Driver of the Year award in 2015 from the Motor Carriers of Montana, after he won his first one in 2009, bestowing the honor of driving the tour truck on Spiekermeier seemed a foregone conclusion, noted Mike Wilson.

"Larry represents the best of our owner-operators. The 18 employees at our headquarters and the 39 other owner-operators who drive under our authority have all worked hard at establishing and maintaining a clean and polished operation with a stellar safety record," said Mike Wilson. "We want drivers like Larry who have an entrepreneurial spirit and appreciate what we're trying to accomplish here. The challenge for us, as it is for the rest of the industry going forward, is attracting a new generation to become drivers and keeping them."

Taking the company's best driver out of production and having him deliver the U.S. Capitol Christmas Tree has presented some challenges, noted Wilson. Still, he sees the effort as a great opportunity to showcase his company and the industry and to attract young people to driving careers. Plus, Kenworth trucks are a huge hit not only with the Wilsons, but also with many of the company's owner-operators.

"I've always been a big fan of Kenworth trucks and the service we get from local Kenworth dealer, Motor Power Equipment, plus a majority of our owner-operators run Kenworths," Wilson said. "It's hard not to be inspired when you see this beautiful T680 running down the road with a 79-ft., 13,000-lb Christmas tree behind it."