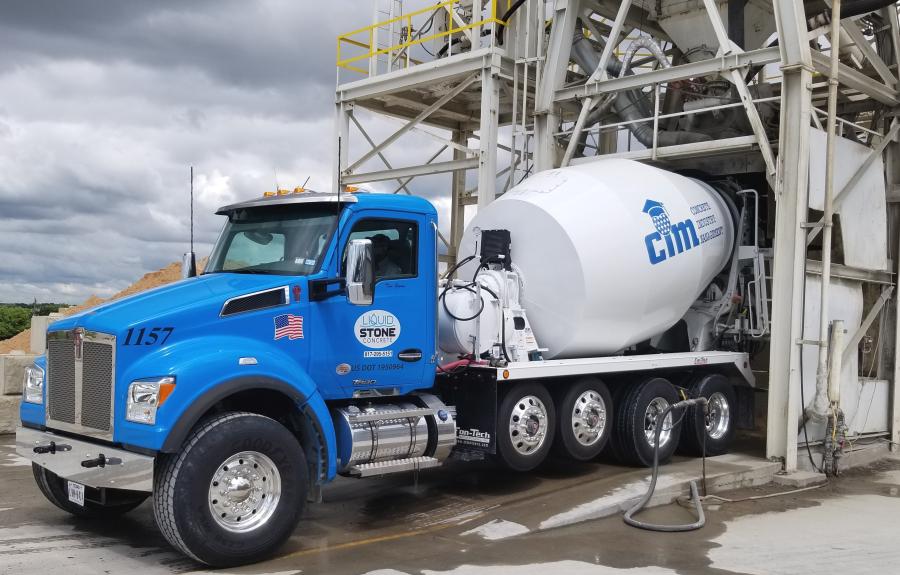 Everything is big in Texas, including concrete. The state of Texas produced the most concrete in the United States last year, nearly surpassing the combined amount by California and Florida, the second and third leading producers, according to data from the National Ready Mix Concrete Association (NRMCA).

Since 1997, Liquid Stone Concrete has made a name for itself providing ready mixed concrete to the south Dallas — Fort Worth Metroplex area. With concrete plant locations in Burleson and Midlothian, the company provides concrete for residential and commercial projects within a 25-mile radius of each plant. Liquid Stone Concrete jobs range from small projects that require less than 11cu. yds. of concrete to large commercial projects up to 30,000 cu. yds., representing nearly 2,730 mixer loads.

"We started adding Kenworth trucks to our fleet a number of years ago," said David Karmy, Liquid Stone Concrete vice president. "My father, Paul Karmy, who started this company, always made it a priority to provide our drivers with trucks that they would be comfortable in and enjoy driving. At the same time, it's important to have dependable trucks with the maneuverability needed to deliver to job sites. The Kenworth T880 meets those requirements and it's why we continue to add them to our fleet."

Since concrete has a finite amount of time before it needs to be poured, it is essential to run trucks that consistently make deliveries without delay. If a truck is sidelined due to mechanical issues, the concrete will go to waste.

"The Kenworth T880 has been a dependable truck for us," said Karmy. "As you know, it gets hot down here in Texas in the summer months. With the high temperatures, we'll start making deliveries early in the morning, and even then, we only have about an hour and a half to complete delivery after filling up the mixer with concrete at the plant. It's important for us to operate trucks that we know will consistently make on-time deliveries and so far, our Kenworth T880s have been solid for us."

Liquid Stone Concrete also operates one Kenworth T880 cement tanker, equipped with the PACCAR MX-11 engine, rated at 430 hp and 1,650 lb.-ft. of torque, to transport cement powder to one of the company's plants.

"The service I receive from MHC Kenworth is top notch," said Karmy. "It's played a role in our decision to continue to add Kenworth trucks to our fleet. The service shop excels at identifying issues and solving them in a timely manner so that they can get our trucks back on the road. The better we are at minimizing downtime, the more profitable we are."

According to Karmy, the company's decision to add Kenworth T880s is well regarded by its drivers.

"I think it's safe to say we have the nicest trucks on the road in the Dallas–Fort Worth area. We get compliments all the time on our Kenworths. Our drivers really enjoy operating them," said Karmy. "The T880 is incredibly versatile and the maneuverability is hard to match. Our drivers tell me how nice it is to be behind the wheel of these trucks, and they especially appreciate the quiet and comfortable cab. I'm willing to bet we have a better driver retention rate compared to some of our competitors that are running other makes."

Liquid Stone Concrete purchased a Kenworth T880S with a set-forward front axle earlier this year at the 2019 Concrete Industry Management (CIM) Auction held at World of Concrete in Las Vegas. The Kenworth T880S, featuring a PACCAR MX-11 engine rated at 430-hp and 1,650 lb.-ft. of torque and a Con-Tech Manufacturing bridge-formula rear-discharge BridgeKing mixer, was purchased for $190,000. The entire purchase amount was donated to CIM, which supports the CIM program through scholarships for students pursuing a four-year Bachelor of Science degree in Concrete Management at Middle Tennessee State University, New Jersey Institute of Technology, Texas State University and California State University — Chico.

The major contribution to the CIM program was made possible due to Kenworth, Con-Tech Manufacturing and Kenworth of Central Florida, and Kenworth supplier partners Meritor, Watson & Chalin, Alcoa and Allison Transmission.

"The CIM auction provided us a unique opportunity to add a T880S to our fleet," said Karmy. "Even though the rest of our T880 models feature the set-back axle, we were in a position where we needed to add another truck. By doing so through the CIM auction, we were able to generate a substantial donation to CIM's program. We began putting the T880S to use in April, and, so far, it has performed well. We expect this truck to also give us many high-performing years."