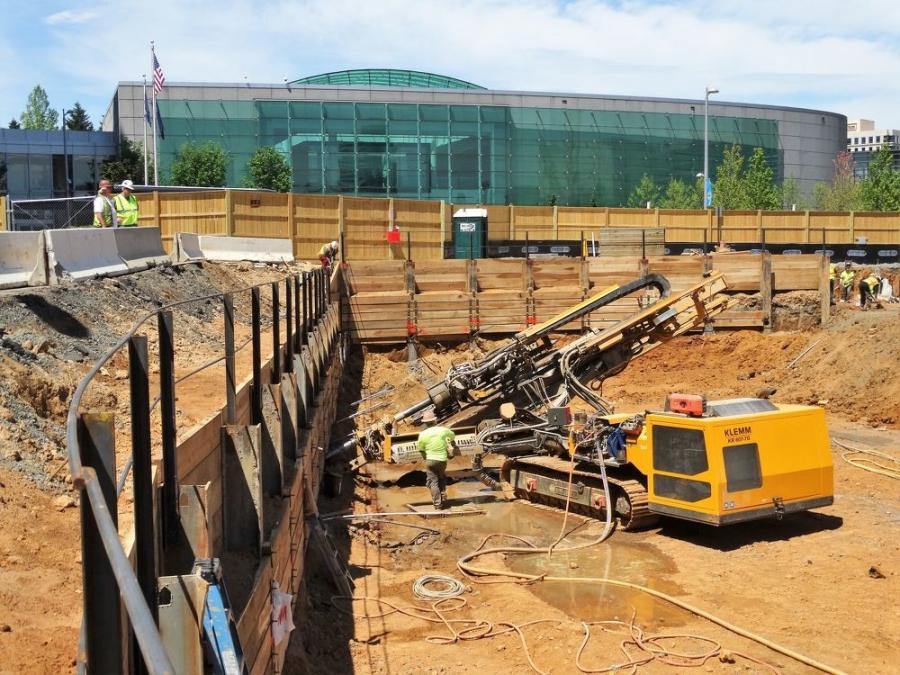 Berkel averaged six holes in an eight-hour day, but drilled 10 or more in a 10-hour day when conditions were ideal.

A KLEMM KR 807-7G drilling rig worked discretely in the shadows of a shoring wall on a busy job site traversed by heavy equipment in the budding metropolis of Tysons Corner, Va. Berkel & Company Contractors had already installed six tieback anchors before lunch on this picture-perfect morning in late April 2019. The quiet, compact rig seemed obscure in this context but its role was essential in shoring up the foundation for a new mixed-use development.

For Berkel, this was a medium-sized job, but the buildings that will eventually stand here are far from small. This final phase will accommodate the third high-rise in the massive complex. Berkel also has done the shoring for previous phases over the past five years, including a 470-ft.-tall tower — northern Virginia's tallest building.

Berkel served as a shoring foundation subcontractor. This shoring system for the project — consisting of soldier piles, lagging and tieback anchors — was identical to the one required for the 470 ft. tall building, which towers above the northern section of this roughly 25-acre site, according to Superintendent Art Rhodes, a 21-year Berkel veteran that works out of the Silver Springs, Md. office.

"We're providing access for Miller & Long to come in and build the footings and building," he said. "We're going to hold up all of the roads, buildings and utilities."

The core of Berkel's work was installing nearly 400 grouted tieback anchors to hold up the shoring walls of a 50-ft. cut from ground level. The contractor also was tasked with the tower crane foundation crane piles and a caisson for the pedestrian bridge that will connect to an adjacent parking garage. 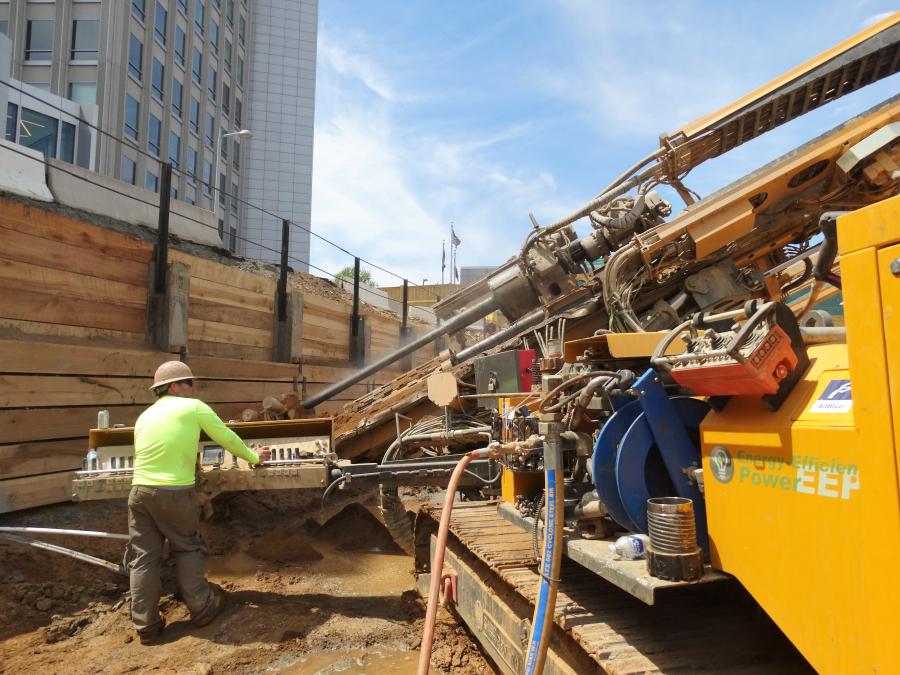 Berkel obtained the KLEMM KR 807-7G from Equipment Corporation of America's (ECA) Washington, D.C., branch in July 2018. The rig served as its workhorse for the high production installation of tieback anchors. Over the past several years, Berkel had already amassed a fleet of 11 KLEMM drilling rigs.

"It's the perfect rig for a project like this where the contractor is looking to maximize productivity for a large quantity of tiebacks."

Berkel used the KR 807-7G to drill holes and install tieback anchors. The rig's Mag 7.0 revolver system enabled the operator to rotate the barrel and install casing sections. A strand tendon was then installed and tensioned to the required strength. Berkel used 70-ft.-long anchors but there were sections where it had to go deeper to reach competent material.

The anchors consist of an unbonded zone adjacent to the sheeting and a bonded zone deeper in the earth. The KR 807-7G extracted the casing sections as the grout filled the void around the anchor. After the grout reached an initial set, Berkel then applied high strength grout to the portion in the bonded zone under pressure. The grouted anchor achieved full strength once the grout had fully cured.

Drilling productivity was high on the project because subsurface conditions were much less complicated than Berkel's typical projects. Rhodes called it a "shoring man's dream job," other than a patch of stubborn quartzite on the south side of the site, which was anticipated based on original test borings. 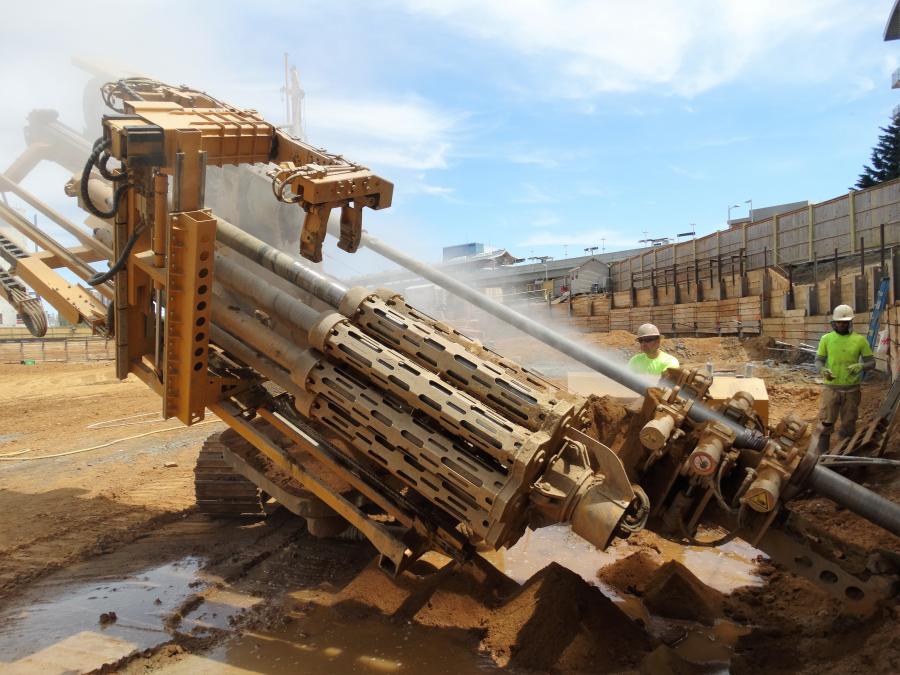 The majority of the site included a sandy clay with partially weathered rock (PWR) starting around 50 ft. down, which was most noticeable when Berkel drilled soldier piles for the shoring wall.

"The PWR makes good anchors for tiebacks," Rhodes said. "It also stands up well when you cut it out for lagging and doesn't cave in."

Berkel used the KR 807-7G to install 6-in. diameter tieback anchors to depths ranging from 65 to 75 ft. The crew averaged six holes in an eight-hour day, but easily drilled 10 or more in a 10-hour day when conditions were ideal.

"We were drilling 75-foot-deep holes in 20 minutes in the areas without rock," Rhodes said. "It took us up to 20 minutes to drill a foot into the Quartz. It's hard rock."

The Journey to KLEMM Loyalty

Berkel had been running KLEMM 806 models and added the 807 line. The KR 807-7G used on this project would become the second the contractor owned. While similar to the 806, the 807s are not only more powerful but also feature the Mag 7.0 rod handling system.

After running virtually every brand of drilling rig over the years, Berkel developed a preference for KLEMM. 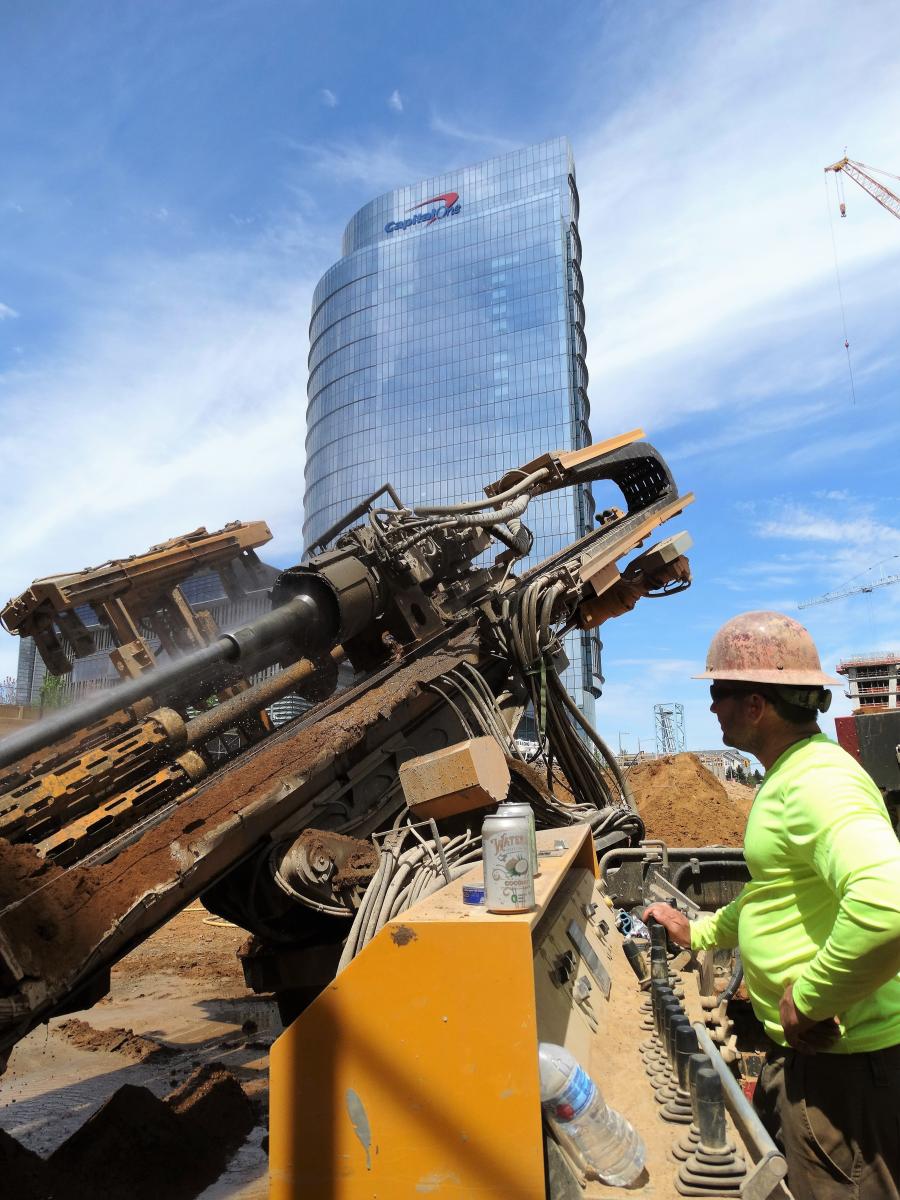 "We've had other rigs that are similar, but they don't compare to the KLEMM," said Rhodes, who recalls Berkel's air-track drills wearing out quickly in the 1970s and 1980s. "It's just a quality piece of equipment. You don't get any better."

Operator Tyler Davis, who ran the KR 807-7G on the project, echoed this sentiment.

"It's like the Cadillac of drilling rigs," he said. "We've had other brands and they just don't hold up."

Rhodes believes Berkel's KLEMM preference dates back to its work at the World Trade Center Bathtub after Sept. 11 when it drilled tieback anchors to secure the slurry wall. The contractor had ordered its first two KLEMMs and he recalled watching the imported rigs floating in on New York Harbor.

"We were running a 9 5/8-inch casing for the tiebacks and each section weighed 400 pounds," Rhodes recalled of the Bathtub project. "We were going 130 feet to rock at a 45-degree angle and the KLEMM spinning that much weight and hanging that much casing was like nothing I'd ever seen before."

The KR 807-7G is stacked with bells and whistles including the Energy Efficient Power (EEP) System, which improves fuel efficiency. The three keys to Berkel's preference for KLEMM, however, are reliability, durability, and smoothness of operation.

An Operator and His KLEMM

Tyler Davis worked the control panel of the KR 807-7G like a master pianist on the project. As an operator with Berkel for 20 years, he has run virtually every brand of drilling rig, and has come to prefer KLEMM.

Davis watched the mast and spinning casing with the patience and intensity of a hawk preying on small game. He explained that he looks for proper functioning, worn and loose parts, and other potential operational issues. 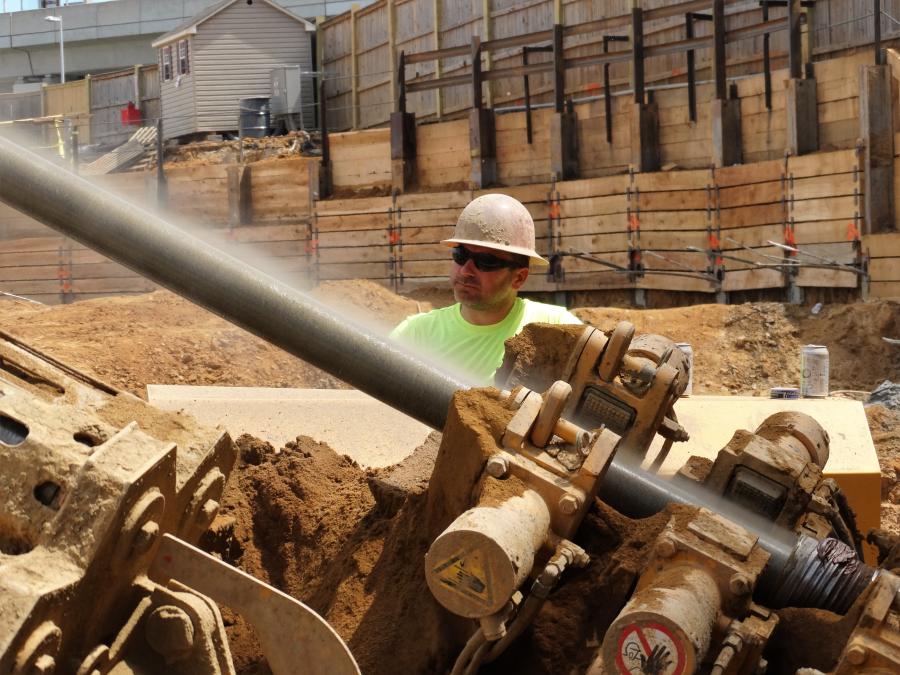 "With other rigs, you dread the idea that the machine might break down because it makes for a longer day," Davis said, recalling that other brands have issues such as leakage and heads blowing out bearings. "These KLEMMS are so reliable. There are hardly any issues other than typical wear."

"They [Berkel] have other rigs but the 807's are the first rigs that they've had that have the carousel or revolver magazine," said Brown, adding that ECA's Kevin Austin provided Davis with a full day of onsite training on the KR 807-7G. "It was a learning curve for him to get used to that, but he started flourishing with this rig quickly."

Davis admitted to watching a YouTube video on the operation of the Mag 7.0, which was a helpful supplement to ECA's training. Within two weeks, he felt he had mastered the functionality and was operating at peak performance.

Berkel started work on the project in February 2019 and planned to be finished by August 2019. Rhodes indicated in May 2019 that the job was firmly on schedule, and if it weren't, Berkel would "give it 100-percent to get it done," whether that meant more hours, weekends, or a stand-in rig.

"On a job like this where you've got a demanding GC and a demanding owner, what would the ramifications be if that rig broke down," Rhodes asked. "Do you plan for that?" Berkel's experience with the KR 807-7G and the KLEMM line as a whole will no doubt ensure that these questions remain rhetorical.