After hearing from George Lucas himself, the council voted 14-0 to approve an environmental impact report and other requirements for the museum's construction next to USC. 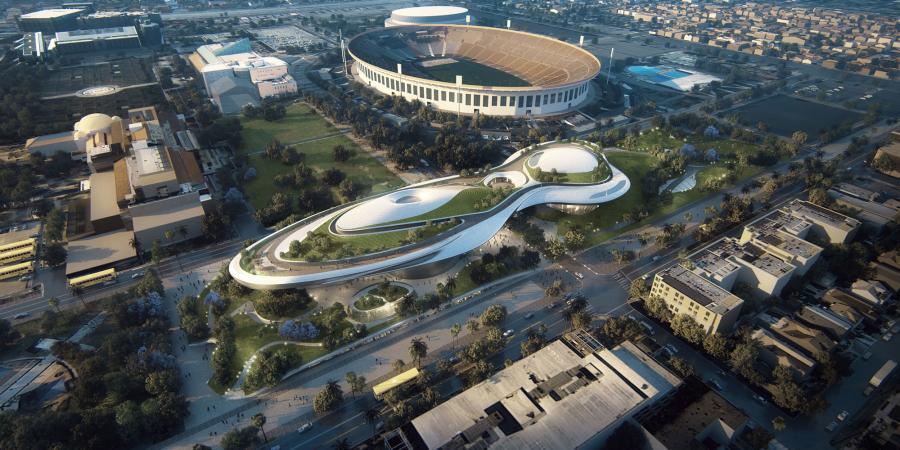 With the approval, plans are to break ground in Exposition Park, south of downtown, as early as this year and open the museum to the public in 2021. (MAD Architects photo)

LOS ANGELES (AP) The Force was with George Lucas on June 27 as the Los Angeles City Council moved with lightsaber speed to clear the way for a $1.5 billion Museum of Narrative Art the "Star Wars" creator plans to build down the road from his alma mater.

After hearing from Lucas himself, the council voted 14-0 to approve an environmental impact report and other requirements for the museum's construction adjacent to the University of Southern California.

Lucas said his museum won't just focus on movies, however, but on the entire history of narrative storytelling, from the days of cave painting to digital film.

"I realized that the whole concept of narrative art has been forgotten," he told the council.

With the approval, plans are to break ground in Exposition Park, south of downtown, as early as this year and open the museum to the public in 2021. The city said the project will cost taxpayers nothing because Lucas and his wife, Mellody Hobson, are footing the bill.

"It is the largest private gift in our city, in our state or in our nation's history," said Councilman Curren D. Price Jr., whose district takes in the park.

It will feature all forms of narrative storytelling, said the museum's president, Don Bacigalupi. He said its exhibits will include story boards, costumes, props and various other elements that went into making "Casablanca," "The Wizard of Oz" and other classic films.

And, yes, there will be plenty of cool "Star Wars" stuff there too.

The Lucas-Steven Spielberg "Indiana Jones" films also will be represented.

Numerous interactive programs for children, film students, academics and others will be offered.

Lucas said he hopes the museum will serve as inspiration to people of all ages, but especially to children, encouraging them to create a better world.

Popular art, he said, is the glue that holds people together, that teaches them that while we may have differences we have similar aspirations.

In addition to USC, the Museum of Narrative Art will be within close proximity to the Natural History Museum of Los Angeles County, the California Science Center and the California African American Museum.

Although Lucas' affection for USC is clear — he and his foundation have given the school tens of millions of dollars over the years — it was once assumed he'd put his museum in his hometown of San Francisco. Or if not there, then his wife's hometown of Chicago.

But when it came time to clear away all the bureaucratic hurdles, just like the upstart Rebel Alliance in "Star Wars," it was Los Angeles that prevailed.

"And then we said, 'All right, let's clear the boards and find a place that really wants it.'"