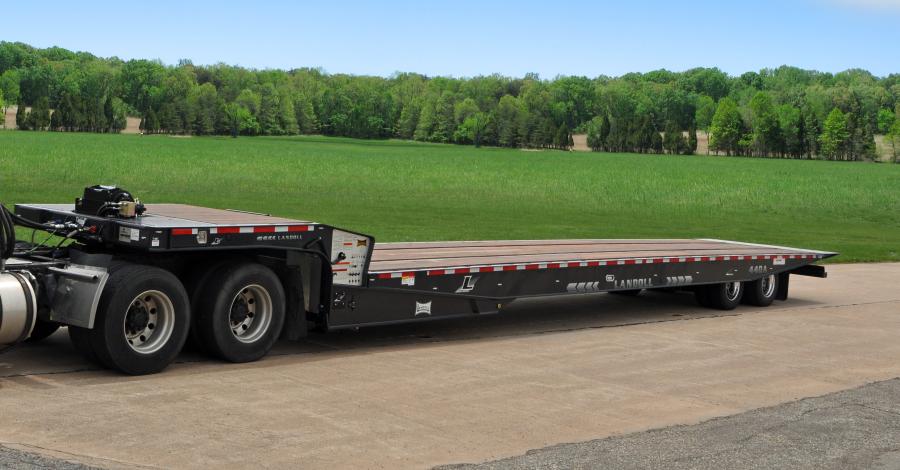 The axle traveling forward has increased by 36 percent and moving back by 58 percent. Tilt deck positioning has increased to nearly 63 percent, while winch in and out speeds are closer to 66 percent. This improvement will allow for more loads to take plac

After more than a year of development, the Next Generation Landoll Trailer has arrived. The Landoll Trailer Line is taking a huge leap forward with the introduction of the all new hydraulic operating systems, nicknamed H.O.S.S., and high visibility lighting package. The 440 and 455 “A” Series traveling axle trailers will be the first models with these added standard features.

H.O.S.S. cuts the overall operational time in half. The axle traveling forward has increased by 36 percent and moving back by 58 percent. Tilt deck positioning has increased to nearly 63 percent, while winch in and out speeds are closer to 66 percent. This improvement will allow for more loads to take place.

“The speed will be the most noticeable change, but the long term value will be in the damage and downtime prevention,” said Gary Dwerlkotte, Landoll Trailer sales coordinator.

Restrictors in the system have been removed to eliminate much of the back pressure, leading to cooler operational temperatures and noise reduction. Long term, wear on components and seals will require less maintenance, yet the quieter system will be a daily benefit. The continuous oil encasement of the valves in the control panel overcome the need for maintenance needed before with the exposed components. In the previous system, the open center inlet required the oil to circulate through the entire system before returning to the tank, allowing for only a 14 GPM (53 Lpm) flow. Oil will now only travel through the inlet and back to the tank, creating a 20 GPM (76 Lpm) flow, according to the manufacturer.

Testing occurred in the Northern Alberta and Quebec provinces of Canada, as well as the New England region of the United States. Long term testing will continue to gather data for future development. The chosen closed spool valve system was designed and built in Italy.

Jim Ladner, Landoll Corporation's National Trailer sales manager, said “the Italians are world famous for their expertise in hydraulics. We are bringing world knowledge and technology to the Landoll trailer with this addition.”

“For several years we have needed to clean up the system to make it more user friendly,” said Dwerlkotte.

The control panel is now located at chest height, encouraging ergonomic and visual improvement, versus previously being located on the lower arm of the gooseneck. Controls are in five predetermined hydraulic function locations, cutting out the need for modifications to the frame at either the factory or dealership.

Bergman added that “this better technology and design simplifies the system.”