It's a significant milestone for a city that's never had a professional football team. 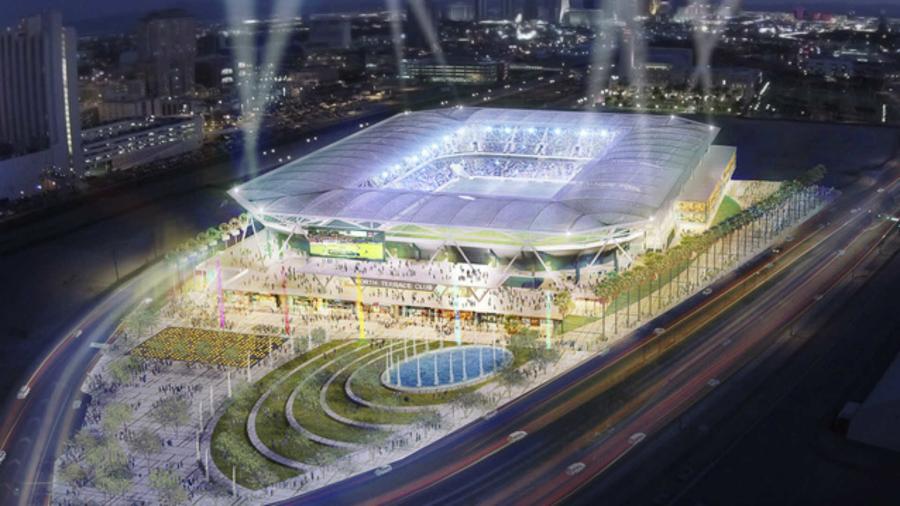 LAS VEGAS (AP) - A plan to build an NFL stadium in Las Vegas and lure the Raiders from Oakland crossed a major hurdle Thursday when a Nevada oversight committee voted unanimously to recommend $750 million in public funding for the project.

The Southern Nevada Tourism Infrastructure Committee recommended raising the hotel tax in the Las Vegas area to help pay for a 65,000-seat domed venue that was promoted and would be partially financed by billionaire casino mogul Sheldon Adelson. Proponents still need to win over the governor, the Legislature and three-quarters of NFL owners to make the project a reality, but it's a significant milestone for a city that's never had a professional football team and has been hammering out the particulars of the Raiders deal for months.

"We get an NFL team, and that is a significant step forward for Las Vegas and the community," committee chairman Steve Hill said about the project's potential. "Those teams bring the community together. We're going to have people wearing Raiders jerseys and high-fiving each other ... That's not something you can put a number on."

The Adelson family plans to put $650 million toward the stadium, which would also be home to UNLV Football, while the Raiders plan to kick in $500 million. Officials with the Las Vegas Sands, Adelson's company, said they don't want to return any profits to the public because they'd be making little or no money on the stadium. They're also committing to fund construction cost overruns and infrastructure improvements at the yet-undetermined site.

Sands representative Andy Abboud said the Adelsons were in China to open a $2.9 billion Parisian Macao casino and probably asleep when the vote came, but he texted them the news and said they'll be excited.

Opponents question whether it's appropriate to put public dollars toward a project spearheaded by one of the richest men in the world. They're also wary of the bonds used to finance the project, which could put taxpayers on the hook to cover stadium debt in a downturn.

Hill said the deal's structure would shield taxpayers even in a recession as deep as the most recent one, when hotel tax revenues fell 33 percent. He also addressed arguments that tax hikes should prioritize Nevada's bottom-ranking public school system.

"I'm not going to argue that a room tax couldn't be used for other things," Hill said, noting that the increase will mostly affect tourists, not locals. "I will say this is an entirely, very appropriate use for room tax."

Stadium proponents drove a hard bargain with the committee, which included casino leaders and elected officials. The Las Vegas Sands said they'd walk away from negotiations if the public put in less than $750 million, and the company fought to protect themselves from any future taxes targeting the team.

Public pressure mounted, too. Union members wearing Raiders gear held tailgate parties outside the committee's meetings, and cheerleaders in silver and black flanked the entrances to the meeting on Thursday. Electronic billboards along the interstate urged people to "hold politicians accountable" on the stadium deal and recommended the hashtag "Don't Screw This Up NV."

It was unclear when Republican Gov. Brian Sandoval might call lawmakers into special session to consider the deal, although proponents want it as soon as possible so they can pitch the deal to NFL owners ahead of their January meeting and potential team relocation vote.

"I will not move forward until all questions have been resolved," he said. "I am hopeful the work completed by this committee will serve as a roadmap to Southern Nevada's unrivaled and continued success."

Oakland Mayor Libby Schaaf, meanwhile, said her city "is neither rolling over, nor giving up" and continues work on a deal with the team.

"Now is the time for everyone in our region to pull together to show the NFL and the Raiders that their future is in Oakland," she said.