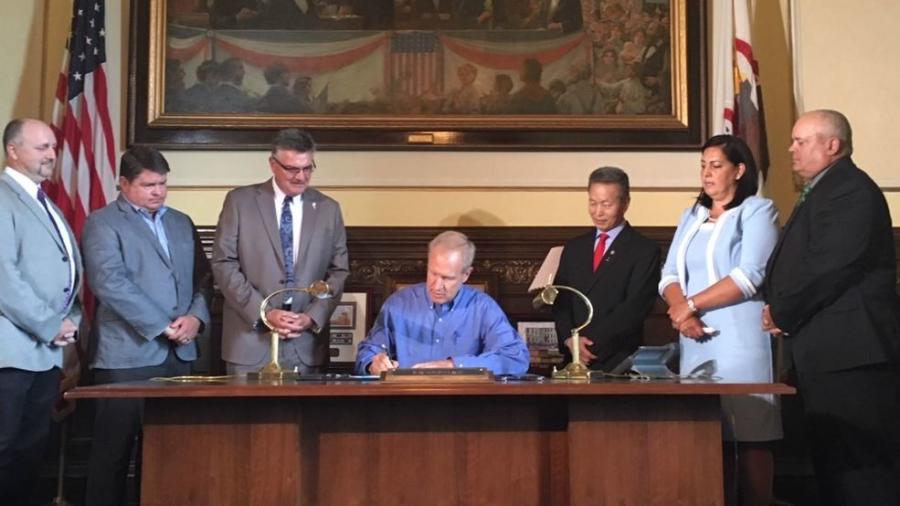 SPRINGFIELD, Ill. (AP) Gov. Bruce Rauner signed a law on July 17 to speed up reconstruction of the troubled state-run veterans' home in Quincy.

The Republican governor approved the legislation to consolidate the design and building processes under state law to save time in overhauling the western Illinois campus where 13 people have died since 2015 because of Legionnaires' disease, although groundbreaking is a year away.

“It's an important step forward to serve our veterans, to keep our veterans safe and healthy,” Rauner said.

His administration has outlined a $230 million plan to start over at the 130-year-old campus, first replacing ancient, corroded plumbing that provides a breeding ground for legionella bacteria that can sicken when it's inhaled in water vapor. Lawmakers approved $53 million for the first of what officials expect to be a five-year plan, said Michael Hoffman, Rauner's senior adviser on the Quincy response.

Buffeted by criticism for months, Rauner basked in the bipartisan mood of the bill-signing ceremony of his state Capitol office. It included one of his harshest critics, Aurora Democratic Rep. Linda Chapa LaVia, who blamed Rauner for what detractors say was a slow response to the outbreak of the pneumonia-like malady.

While noting that Rauner's Democratic opponent in the November election, J.B. Pritzker, also has a plan for rebuilding Quincy, LaVia, chairwoman of the House Veterans' Affairs Committee, said, “It should have never happened and we shouldn't have waited so long to act.”

Her counterpart on the Senate Veterans Affairs Committee, Sen. Tom Cullerton, wasn't so charitable. The Villa Park Democrat said in a text message that the General Assembly was forced to do the work and “Gov. Rauner does not deserve a pat on the back to attempting to govern in the 11th hour.”

Rauner has repeatedly noted that upon the first outbreak in 2015, his administration called in federal health experts and followed their advice.

One law Rauner signed allows officials to hire one company for both architectural plans and construction, saving the time it takes to design and then seek bids for a builder.

“We hire one developer and they are responsible for making sure we meet budget, we meet timeline, and that the building they end up building ends up being a building that's easy, safe and efficient to operate and maintain,” Hoffman said.

The other law includes, as part of the Quincy campus, the nearby former nursing home the state bought for extra space. It likely will be used to house veterans during construction on the main campus and might be used for specialty nursing skills in the future.

Renovation on the home has begun, Hoffman said. Drawing a master plan is under way. It and engineering plans for replacing plumbing, which will begin this summer, should be done by year's end. Architectural plans should be finished by next summer, he said.