Executives from the two companies presented a check for $100,000 during the National Pavement Expo (NPE) in Charlotte, N.C. 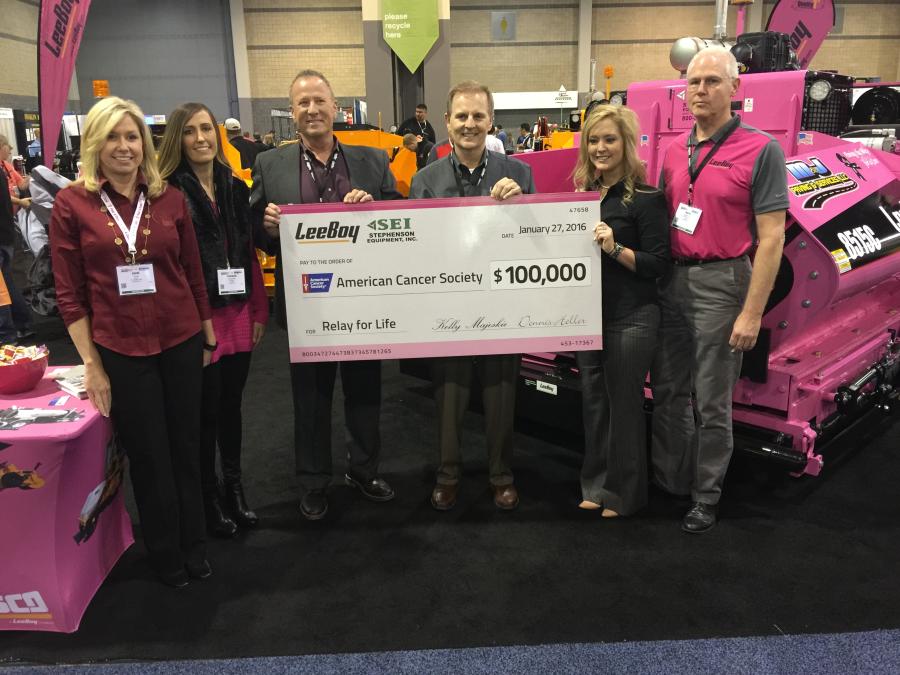 LeeBoy, an industry leader in self-propelled pavers from Lincolnton, N.C., and Stephenson Equipment Inc., a leading construction equipment dealer based in Pennsylvania, will have raised $100,000 for the American Cancer Society's Relay For Life by August 2016. That's more than the entire event in Lincolnton raised last year and double their initial goal.

Executives from the two companies presented a check in that amount during the National Pavement Expo (NPE) in Charlotte, N.C., where they also unveiled one of their unique fundraising tools — the pink paver.

For Kelly Majeskie, president, The LeeBoy Group, $100,000 isn't even the most impressive number related to the fundraising.

“What surprises me and what I'm most pleased about is the number of people and companies who got involved in the project,” he said.

The entire LeeBoy staff, dozens of vendors and one dealer, Stephenson Equipment Inc., all pitched in to raise the money.

For the past several years, LeeBoy has run internal fundraisers for the American Cancer Society's Relay For Life event in Lincolnton, N.C. It's always been a grassroots effort.

“Our employees take ownership and they take responsibility for success,” said Majeskie. “We're all working shoulder-to-shoulder in this as individuals.”

Sandy Greene, who works in customer service, organized the first LeeBoy Relay For Life team in 2010. A team of 25 (mostly family members) raised about $2,500 that first year. That year the event went from 6 p.m. to 6 a.m., and according to Greene, it was a dark and stormy night.

“The grills were turned over and tents were flying everywhere and we stuck it out as long as we could,” she recalled. “Relay For Life was new to us. It was kind of trial and error for the first few years.”

Greene organized the event out of love for her sister, Debbie Hare, who was diagnosed with stage-2 breast cancer on her 52nd birthday. Greene credits the research funded by the American Cancer Society for sparing her sister from the pain of chemotherapy. This research was so new that if Hare had been diagnosed even three months earlier, she would have been treated with chemotherapy in addition to having to undergo a mastectomy. Research demonstrated that chemotherapy was unnecessary. Five years later, Hare is still cancer-free.

When Greene found out that she had pre-cancerous tissue in her own breast in 2014, Mark Brissenden, accounting manager of LeeBoy, took over as captain of the Relay For Life team.

“I think a lot of people jumped in to help not only because it was Sandy but everyone knows someone whose life has been affected by cancer,” he said. “We've had a lot of help around here.”

That year Brissenden and the organizing committee decided to introduce some fun in the project — a clown/circus theme was chosen.

“People really got into it and many dressed like clowns for the event,” said Brissenden.

They made cotton candy, and the committee introduced new fundraisers, including auction items donated by vendors, an auction of scrap parts and tools, a silent auction of Easter baskets and candy sales. That year, they raised $5,001.

“We were pulling out all the change from our pockets during the event so that we could say we raised over $5,000,” recalled Brissenden with a laugh.

In addition to helping his colleague, Brissenden had a personal reason to support the cause. He felt the pain of cancer through his mother's death. From the experience, he learned about the patient-care services the American Cancer Society provides.

Tamara Helderman, human resources generalist of LeeBoy, was the individual who first thought of the idea to build a pink paver in 2015. While looking at a custom-painted green asphalt paver on the shop floor, she thought that a breast-cancer-pink would help raise awareness and funds. Before she pitched the idea to senior management, she consulted with Gary Beaver, paint production manager. Then she asked Shannon Seymour, vice-president, operations: “Do you think a pink paver is a good idea?”

“Heck ya!” Seymour recalled telling her when he first heard about the pink paver idea. His only caveat was that they should ensure that they could sell the asphalt paver before painting it pink.

Seymour managed the custom paint job through the assembly process with few wrinkles.

“Everybody was completely onboard,” he said. “LeeBoy is accustomed to painting different colors because we do custom paint jobs for DOTs and other customers.”

As part of their contribution, LeeBoy covered the additional costs associated with the custom job and their paint supplier mixed the color and donated the paint.

But Who Would Buy It?

When they considered who would buy a pink paver, Bob Grail, president and COO, VT LeeBoy, Inc., and Majeskie both immediately thought of Dennis Heller, president and CEO of Stephenson Equipment, Inc. They knew that his wife, Laurie, had been diagnosed with breast cancer and he would at least hear them out.

Bryce L. Davis, general sales manager, North America, approached Heller to see if he would buy the pink paver. He jumped at the chance. He bought the pink paver and made a significant donation towards the project.

Heller has now sold the pink paver to M&J Paving & Services LLC in Mifflintown, Pa., where it will be put into service, paving roads while attracting attention and raising awareness.

“This paver will be around for years and this story will encourage others to donate to fight this dreaded disease,” Heller said.

Heller's personal story has a happy ending. Due to an early diagnosis and a double mastectomy, Laurie is now cancer-free. The Hellers know how lucky they are.

“No one is excluded from cancer,” said Heller. “We were fortunate so far, but others need help. I believe strongly in giving back for the blessings we've been provided as business owners.”

In addition to the involvement from employees and the dealer, LeeBoy suppliers also pitched in. Patrick Turner, director, Supply Chain, and his team of buyers reached out to some of LeeBoy's vendors and asked them to donate to the pink paver project (an 8515C conveyor paver). The dollar value of their parts varied as some parts cost only pennies and others would be as much as $14,000. Turner expected that suppliers would probably donate their margin on those parts.

“Boy was I wrong,” said Turner. “I was overwhelmed by the generosity of our vendors.”

Almost 100 percent of the suppliers who were asked, donated; and donated much more. In many cases, it was the complete value of the component.

“The small, local businesses really surprised me. For many, that's not a small contribution for them,” said Turner.

“This project has taken on a life of its own,” said Seymour. “It's been fun and exciting to be part of it. I can't remember anything else we've ever done that's been this big, this engaging.”

Seymour said that whenever he mentions the pink paver at LeeBoy, people's faces light up.

“The workers are proud and happy to be involved,” said Ricky Jones, LeeBoy production manager.

A lot of the painters, welders, screed workers and assemblers who built the pink paver have colored the LeeBoy logo on their hats with pink markers.

“I didn't really expect it to take off like it has,” said Helderman. “Everybody from every department has pitched in. When you can get everybody excited about a cause and support it, it speaks volumes about the family-like atmosphere here at LeeBoy.”

Although the pink paver is now sold and the Relay For Life team has doubled their fundraising goal, the fundraising continues at LeeBoy.

“We actually have a lot more to do: silent auction, raffles, vendor raffle and the relay itself in May,” said LeGette. “We blew last year out of the water, and we're still at it.”

LeGette wonders what the company can do next year to top this year's success.

Majeskie, who lost his mother to cancer when he was 12, hopes that the success of the pink paver project will inspire other OEMs and dealers to unite for a good cause.

“The pink paver is really going to stand out. Maybe we will light a spark, and motivate more people in the industry and in our region to give back to their communities,” he said.