What will be one of downtown Miami's tallest luxury condo towers has reached a milestone in construction, as crews prepare to go vertical. In January, after months of piling and excavation subterranean work, roughly 700 workers poured the foundation for CMC Group's 64-story Brickell Flatiron condominium.

Brickell Flatiron unit prices range from $465,000 to $2.5 million, with penthouses priced at more than $15 million. Construction of the tower is expected to be completed in 2019.

"Once complete, Brickell Flatiron will be a retreat in the center of one of the most desirable parts of Miami," said Ugo Colombo, veteran real-estate developer. "We're not offering gimmicks. We are offering a high-quality product, timeless design and an unmatched location. Our buyers will benefit from the prestige of living in Brickell, a brand synonymous with an upscale, urban lifestyle, which is known on an international level and is sure to maintain its reputation and value." 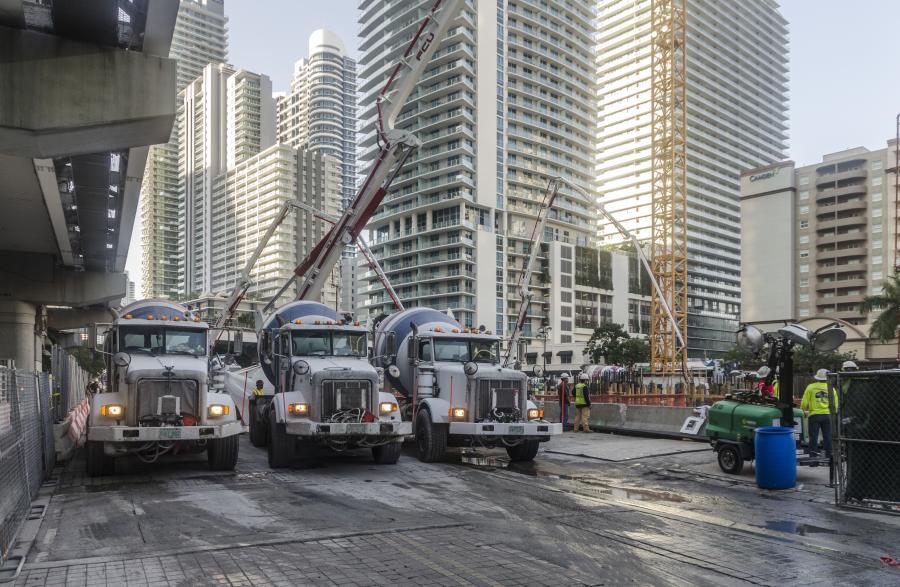 Being promoted as an architectural icon that will redefine the Miami skyline, Brickell Flatiron is a 549-unit project designed by Luis Revuelta. A mixture of glass, curves and Renaissance-revival interiors, the building will stand more than 700-ft. (213 m) above street level, and will be one of the tallest residential towers in the United States. It will be located at the epicenter of the city's Brickell Financial District.

According to Ed Baro, Moss & Associates vice president, "This is a large, complicated project on a very compact site. The name ‘Flatiron' is a reference to a great building in New York and the site shape. The small site provides work constraints and limited working hours, due to the location in this busy residential and working community."

Baro said going vertical involves the forming and pouring of structural elements above the ground level, such as columns, shear walls and slabs.

"At this point, the foundation for the building has been constructed. No issues were encountered, thus far. However, there were a few challenges on the project that were closely managed. For example, dewatering, or keeping the hole dry, was critical to the activities performed within the foundation of the structure. While it was not easy, we are very pleased with the outcome.

"Planning for the mat foundation pour began immediately when Moss agreed to take on the project in March 2016. After determining that the pour could be done logistically and with an acceptable amount of risk, planning with the various trade contractors along with the city of Miami began in August. After two dozen meetings with both individuals and as a group, the final plan was put together mid-December. The large number of teams involved were required to follow the plan very closely," Baro said.

Piling and excavation subterranean work also was a significant undertaking. 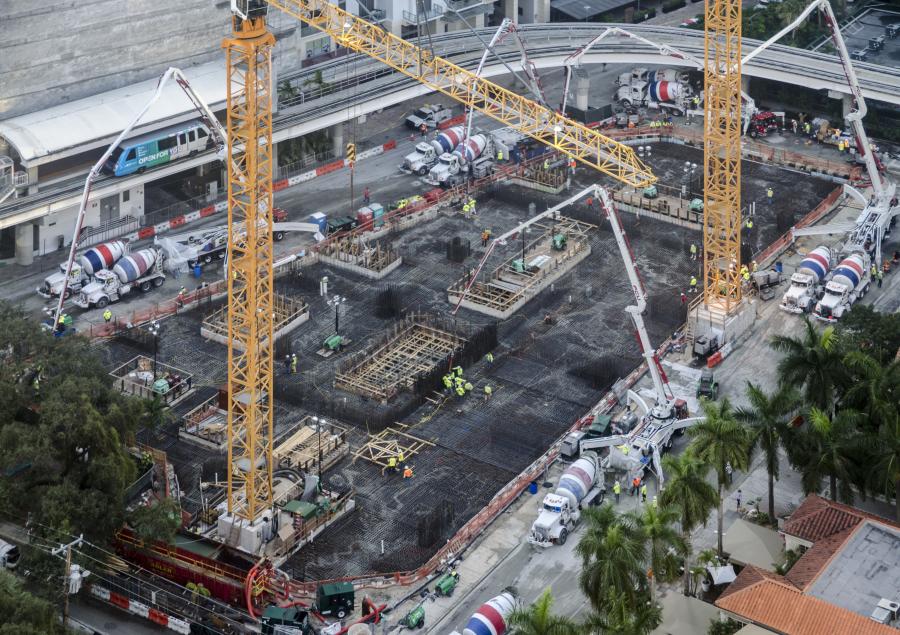 "The piling consisted of 530 30-inch piles that were drilled to a depth of 115 feet, The piles were drilled at a rate of nine per day on average," Baro said. "The pile phase required 25 trucks of concrete per day and 20 dump trucks to load out spoils. Along with steel deliveries and a tight area to work, the logistics were challenging. Throughout the process, traffic interruption in the area was minimal, and very few complaints were received.

"The excavation consisted of the removal of some plus or minus 13,000 cubic yards of dirt. A steady stream of dump trucks worked throughout the days for months on end to excavate the foundation. Again, logistically the project was a challenge. The larger the excavation became, less room was available to stage equipment. During the last month of excavation, the staging area became a runway on the eastern section of the project that measured 200 feet long by 21 feet wide."

The bottom elevation of the foundation sits at -4 ft. (-1.2 m), with a few sections at -8 ft. (-2.4). This equates to roughly 15 ft. (4.6 m) deep from the current streets surrounding the project. There were 14 dewatering pumps strategically placed along the perimeter to keep the foundation dry. These pumps were running and were monitored 24/7 by Moss personnel throughout the foundation work.

"Prior to Moss taking control of the project, the site was being used as a public parking lot, and a popular restaurant and bar was located on the northern portion of the site," said Baro. "Multiple utilities were relocated during the test pile program to allow for work to commence. Demolition consisted of the removal of sidewalks, underground drainage and iron fencing surrounding the property. The grade found on the property was satisfactory to allow for the work. No grading was required to drill the piles."

Weather has been somewhat challenging, but so far has not caused any major setbacks.

"The typical South Florida rains slowed progress slightly, but crews worked extra hours and Saturdays to maintain the project schedule. Hurricane Mathew at the beginning of October caused about a week delay in progress."

Work has already begun on utilities for the project. Before the foundation pour, all five of the incoming water services were tapped and brought to the property line. Drainage and sewer work is ongoing and should be substantially complete in the coming months. Gas and electricity have been coordinated and will start fairly soon.

Baro said working in an environment with pedestrians and traffic nearby comes with the job assignment.

"As you can imagine, hundreds of people are working hard on site every day. The entire team is very excited to work on such a challenging and high-profile project as Flatiron. We are honored to be chosen by this prestigious developer and design team." 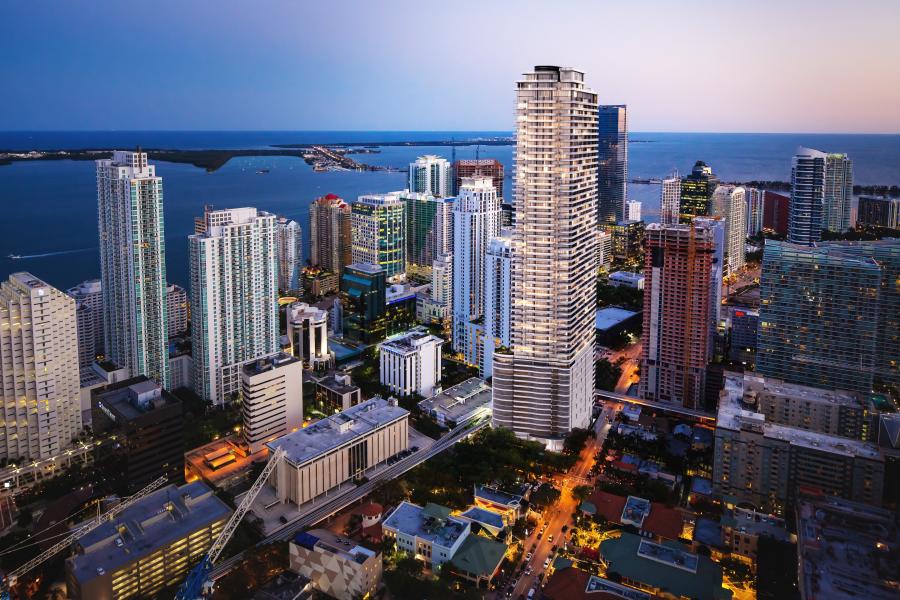 The 64th-floor rooftop sky spa, sky pool and sky gym will provide views of Biscayne Bay and downtown Miami's cityscape. Other features will include a resort-style lap pool and children's pool, access to the Flatiron Theater with stadium seating, an executive meeting room, a billiard and cigar room, a wine cellar, 24-hour concierge and parking valet and electric car-charging stations.

Architect Revuelta, who in recent years has designed and project-managed the tallest and most complex condominium buildings in the Southeast, said his vision was to create a unique building on a distinct site. He also wanted to establish an identity that would set the building apart from surrounding structures.

"The Brickell Flatiron site is a triangular site with the Metromover running on the south and east side. This presented a challenge in terms of determining pedestrian and vehicular circulation.

"The inspiration was the triangular geometry of the site. Also, the desire to create movement on a building which is static in form, by creating interesting variations in the geometry of the building. Specifically, the balconies, which create a feel that the building is being struck by wind, therefore creating movement, mainly on the east and north facades of the building," said Revuelta.

As for the size of the structure, "The height is similar to other buildings we've done. It affects it in a similar way that any other tall building designed in Florida — designed to the building code requirements, for hurricane conditions. Therefore, the central core of the building, the reinforced concrete and the sheer walls are fairly large, but in essence it's not much different than other tall buildings we have previously done."

Revuelta is confident the luxury tower will endure for generations to come.

"We have strived to maintain clean, simple, proportionate geometry in our buildings, which have proven over the thousands of years of architecture to stand the test of time."

The building will feature primarily glass, aluminum and concrete.

"It was important for the design not so much to complement the surrounding area, but to create a building that was not out of context with its surrounding areas, but at the same time had an identity and elegance that makes it stand out from other structures in the area."

The environment also was a consideration.

"We always try to implement sustainability in our buildings. With this building we are aiming to become LEED silver certified," said Revuelta.

"My hope is that the residents enjoy the building for its functionality, quality of materials, aesthetic values and overall comfortable and luxurious livability."

Miami-Dade Mayor Carlos Gimenez and Miami Downtown Development Authority executive director Alyce Robertson were among those attending the building's spring 2016 groundbreaking, which included a champagne reception. In addition to lifting ceremonial shovels of dirt at the construction site, officials praised the project, which is located in the heart of the downtown area.

Brickell Flatiron's luxury condos will be within walking distance to Mary Brickell Village and Brickell City Centre. Residents will have access to sidewalk cafés, fine dining, shopping and markets, as well as outdoor and various cultural activities. CQ