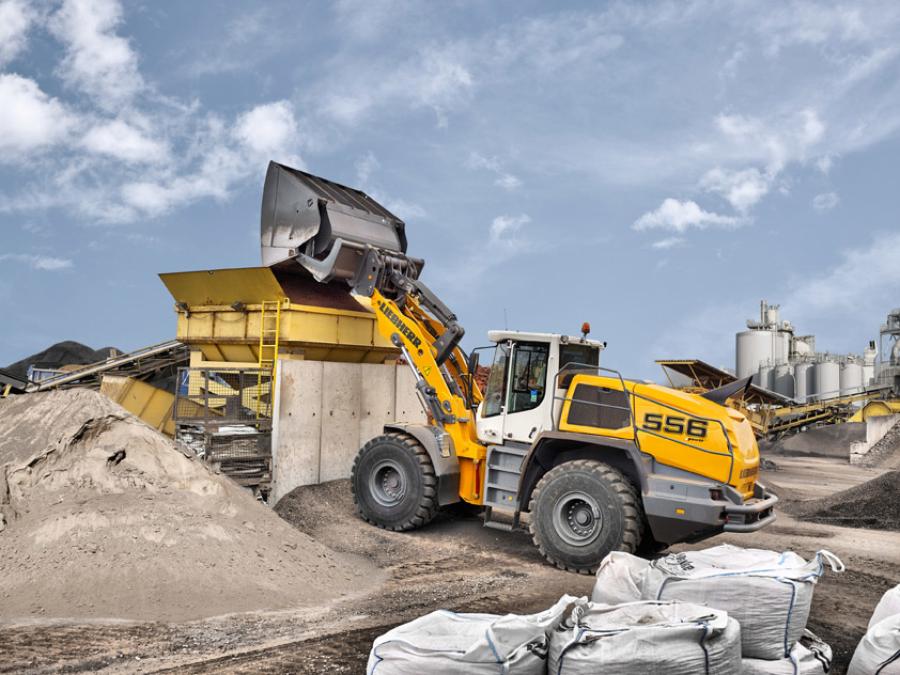 The manoeuvrable and dynamic Liebherr L 556 XPower wheel loader with industrial lift arms and high-dump bucket in test operation at a recycling business.

The latest XPower large wheel loaders with emission Stage IV / Tier 4f represent a milestone in the technological history of Liebherr wheel loaders, according to the company. Due to the wide range of innovations, such as the power-split driveline installed as standard, Liebherr has subjected its new wheel loader generation to much tougher, more thorough and more extensive testing than ever before. Important main components, such as the innovative XPower® driveline and the larger axles, were found to be particularly durable in testing over 70,000 operating hours. The load programme in the test phases included traditional back loading as well as customer-specific special operations.

Liebherr deployed the XPower® test wheel loaders in various quarries, recycling businesses and sawmills. The machines have also been involved in loading slag in a steel plant and coal in a harbour. The positive test results demonstrate that the efforts made by Liebherr to combine fuel efficiency, high performance, durability and comfort in a single wheel loader have achieved their goal over the long term.

Liebherr is installing the power-split XPower® driveline as standard in its large wheel loader series. This ensures power and efficiency in the new Liebherr large wheel loaders. The XPower® power-split transmission performs the same function as the traditional power-split transmission but with a greater level of efficiency. It combines two types of drive: the hydrostatic drive, the most efficient drive in short loading cycles, and the mechanical drive for long distances and driving up gradients.

The power-split transmission manages the interaction of the two drive types. It is adjustable and continuously adapts the mixing ratio of the two drive paths without noticeable switching and without interrupting traction power. In this way the power of the wheel loader adapts to the specific requirements of the particular task. A greater hydrostatic element comes into effect during starting and loading and a greater mechanical element is applied when travelling at higher speeds. Together, the two paths always transfer 100 per cent of the diesel engine power and only the mix ratio of the two paths changes.

With its innovative and efficient drive concepts, Liebherr has achieved a high level of efficiency in all areas where wheel loaders are used. The proven Liebherr-Power-Efficiency system (LPE) plays a key role in this. Over a test and development phase lasting several years, Liebherr worked continually to perfect the adaptation of all drive-train components. The result is that XPower® wheel loaders reduce fuel consumption by up to 30 per cent enabling operators to reduce their operating costs.

Rehandling a wide range of materials is one of the basic tasks for a wheel loader. This is why Liebherr-Werk Bischofshofen GmbH trialled several machines in rehandling tasks. For example, a gravel and crushed stone plant tested an L 580 XPower® with Z-bar linkage and 5.7 m³ bucket. The wet raw material, which the company extracts from a lake using a bucket chain, proved to be a particular challenge.

With the strengthened Z lift arms providing up to 20 per cent more break-out force, the machine operators lifted the wet material without a problem, and the optimised bucket design offered improved penetration action for the task. The responsiveness of the XPower® driveline was impressive when the loading route had an uphill gradient. The machine operator praised the quiet, comfortable handling and the agility of the wheel loader. At approximately 15 litres of diesel per operating hour, the L 580 XPower® consumes around five litres less than an existing competitor machine undertaking similar activities in the gravel and crushed stone plant.

An L 566 XPower® loaded approximately 1,500 tonnes of bulk material in a building materials recycling park. The wheel loader coped with the distances across the large site, which were generally much greater. In doing so, the wheel loader consumed between 14 and 18 litres of diesel. The machine operator was pleased with the level of performance and the comfort. As a senior employee at the recycling park commented, "The thrust force and acceleration of the L 566 XPower® are excellent. The machine is very responsive, but still runs quietly. The large cab is particularly comfortable. The driver's seat is great. I can adjust the steering wheel in three ways and the control elements are arranged so that all the information is available at a glance".

The new large wheel loaders have proved their stability during intensive long-term testing. An L 586 XPower® with Z-bar linkage was the front-runner in the endurance test, reliably performing its task of transporting wood chips into a silo for 13,700 operating hours. An L 586 XPower® was selected because the thrust force and break-out force - the key requirements for this specific task - were ideally suited, in proportion to the operating weight, to the site requirements. The L 586 XPower® also had a 14.0 m³ light material bucket, which the machine operator was able to use on each cycle to move large volumes of wood chips.

The machine was operating almost constantly under a full load. Despite this, fuel consumption remained low thanks to the power-split XPower driveline. The test wheel loader required 20 litres of diesel per operating hour for the power-intensive task. This equates to a fuel saving of around 30 per cent when compared with the already very economical Stage IIIA / Tier 3 L 586 wheel loader normally used to transport the wood chips.

Operations under a full load are where Liebherr customers benefit from the power deployment provided by the interaction of the mechanical and hydrostatic drive paths in the new XPower® driveline. The load is divided across the two drive paths and the components have a significantly longer life as a result. Machine operators can work more efficiently and safely with minimal downtime.

Full power at the quarry face: quarry test for the L 586 XPower

An L 586 XPower®, fitted with a 5.5 m³ rock bucket with Liebherr tooth system, was tested in the quarrying industry by an international cement manufacturer that used it for extraction. Other standard quarrying equipment options, such as a foldable grille for the windscreen, were included on the machine to prepare it for its work at the rock face. The challenging test operation featured routes of up to 400 m and inclines of up to 30 per cent.

The benefits of the power-split driveline really came into effect under these conditions. The combination of the hydrostatic and mechanical drive ensures that the wheel loader works efficiently on all operations, even on long routes and up hills. The L 586 XPower® proved this to be the case in this special quarrying task. Despite the enormous load, the test loader only used around 22 litres of diesel per operating hour.

An L 586 XPower® fitted with a 4.5 m³ high-dump bucket, comprehensively reinforced tyres and tyre chains completed a tough test operation. The wheel loader took on the task of removing solidified steel slag at a steel plant. The L 586 XPower® broke into the heavy, bulky and dusty metal slag with full power. The heavy tyre chains, which weighed over 3.5 tonnes, provided the necessary traction. Under this extreme load, the robust axles and the powerful Z lift arm were found to be very durable. The L 586 XPower® was in operation for a total of 9,000 hours in the steel works without any damage to the main components.

Liebherr exposed other test wheel loaders to tough conditions. At a harbour terminal, a L 586 XPower® loaded coal using a 10.0 m³ bucket. One of the challenges in this load-and-carry operation was to spread the partially-wet coal. The Liebherr test wheel loader completed its task reliably for over 7,000 operating hours with minimal fuel consumption. During the test, the L 586 XPower used between 8 and 10 litres less diesel per operating hour than its predecessor, which normally operates in the harbour.

Liebherr-Werk Bischofshofen GmbH tested the new wheel loader generation in various industrial applications including working in a paper factory. Here the test machine was an L 556 XPower® with industrial lift arm, 6.0 m³ light material bucket with undercut blade and numerous Liebherr factory-fitted options, including a coarse meshed cooler net and a lint filter to reduce contamination of the cooling system with dust particles.

The test showed that the new Liebherr SCR technology increased operational safety. This simple and extremely effective system for the after-treatment of exhaust gases means that regeneration is no longer necessary and fire risk is reduced to a minimum. This is a significant safety feature in dust-intensive environments such as indoor operation in the paper factory.

Another L 556 XPower® with industrial lift arm worked in aluminium scrap recycling. As part of the test's 3,500 operating hours, several machine operators worked in a three-shift operation with two different attachment tools, which they changed with the aid of a hydraulic quick hitch. As with the paper factory, the space was confined but, thanks to the compact design of the XPower® wheel loader, the machine operators were able to manoeuvre efficiently and perform very well in handling.

Liebherr-Werk Bischofshofen GmbH deployed other wheel loaders in recycling tasks. An L 556 XPower® worked in the disposal of slag waste. For this heavy material, which placed considerable demands on the wheel loader, the test customer used a 4.0 m³ high-dump bucket with undercut blade. The robust wheel loader loaded material, formed heaps and fed crushers for a total of 5,000 operating hours over a two-shift operation.