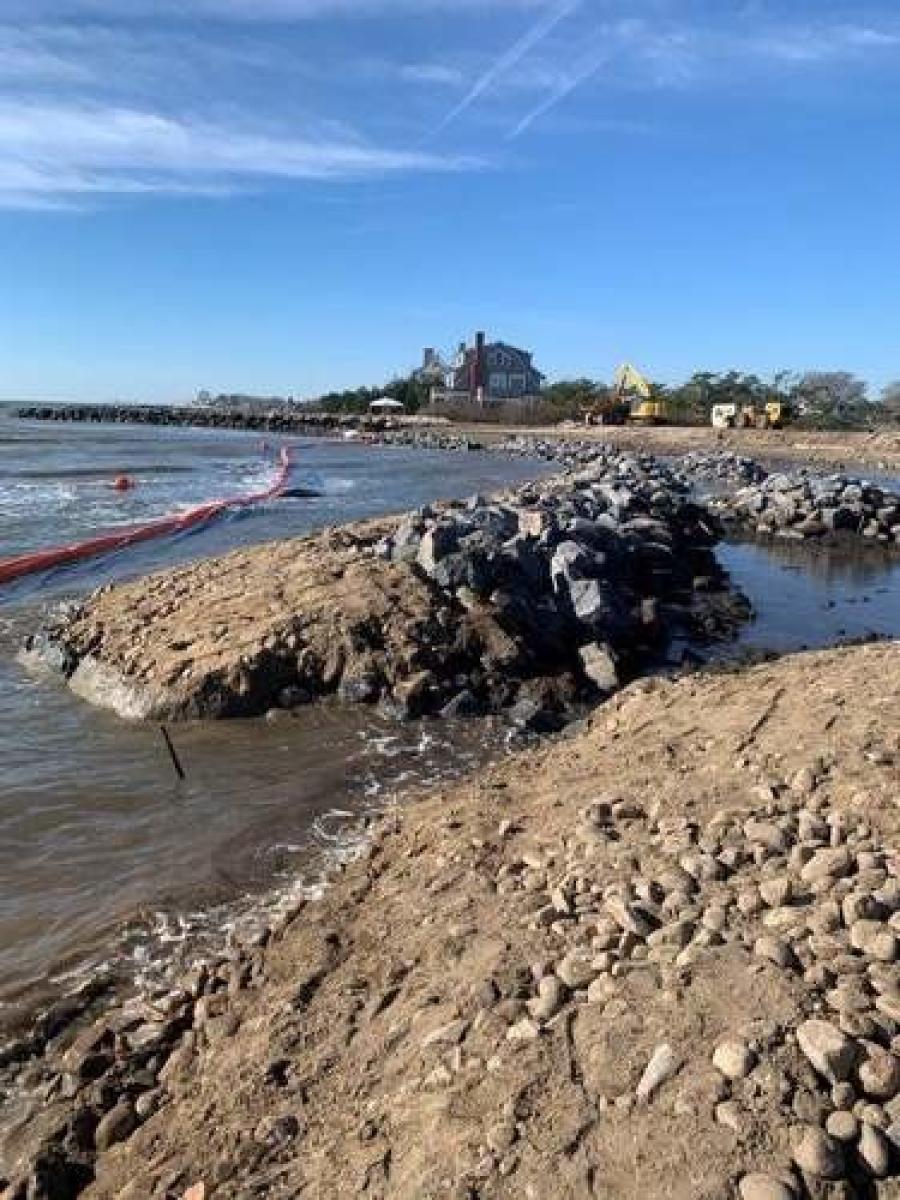 The stretch of shoreline in front of the former Hepburn estate in Fenwick is undergoing living shoreline restoration aimed at preserving resiliency. (Connecticut River Conservancy photo)

Only the second living shoreline restoration project in Connecticut, an effort to restore and protect the shoreline at what was the property of legendary actress Katharine Hepburn in Fenwick, began last fall under the guidance of the Connecticut River Conservancy (CRC), which is working closely with the Lynde Point Land Trust, which owns the land, and the borough of Fenwick.

"'Living shoreline' is a term of art [used by] coastal restoration specialists and people that are trying to figure out, ‘How do we do several things at once: protect human infrastructure and protect and restore coastal habitat?'" said CRC Executive Director Andrew Fisk. "A typical response has been, ‘If I have coastal sand dune erosion in front of my property, I'll build a seawall or put a jetty in and put a lot of rock down.'"

But, he explained, "solutions in the past have only answered part of the question. Scientists and restoration people have said, ‘We can do things differently.' So, while the living shoreline concept also entails ‘putting structure in the water, it's doing it to the least amount that can still prevent erosion and is then creating marsh habitat, dune habitat [and] beach habitat at the same time."

Instead of simply installing a pile of rocks or a wall or steel sheet pile, Fisk continued, the thinking of someone working toward creating a living shoreline is, "Let's protect human infrastructure and create and protect coastal habitat at the same time. The general concept originated in the mid-Atlantic and now, here in New England, we're [employing] specific strategies, particularly in Connecticut and in Long Island Sound."

The area being restored is close to the mouth of the Connecticut River at the end of the jetty, to the west of the Lynde Point Lighthouse.

The CRC focuses its attention on the Connecticut River from this very area all the way up to the Canadian border, Fisk noted.

While the property is "technically facing Long Island Sound," he added, "rivers and oceans interact in estuaries, so there's not really one bright line" separating the Connecticut River from the Long Island Sound.

The river and sound slosh back and forth, he explained, and the salinity from the sound can be measured as far north as Hartford.

The CRC has been a particularly active member of the partnership, seeking grants, putting out the bids for contractors and supervising construction, according to Fisk.

"We have that experience in a way that a small all-volunteer organization like the Lynde Point Land Trust" does not, he said.

The restoration was designed by engineering firm GZA GeoEnvironmental Inc., which has an office in Glastonbury and has worked with the town of Saybrook and the borough of Fenwick on previous projects, including their hazard mitigation plan.

The company awarded the construction contract is Sumco, a civil and ecological construction company based in Peabody, Mass. Work began in October and is expected to be completed in April or May 2021.

A $150,000 grant from the John T. and Jane A. Wiederhold Foundation has made the project possible, along with funding from the National Fish & Wildlife Foundation's Long Island Sound Futures Fund, the Robert F. Schumann Foundation, and the Community Foundation of Middlesex County–Janvrin Fund for Wildlife.