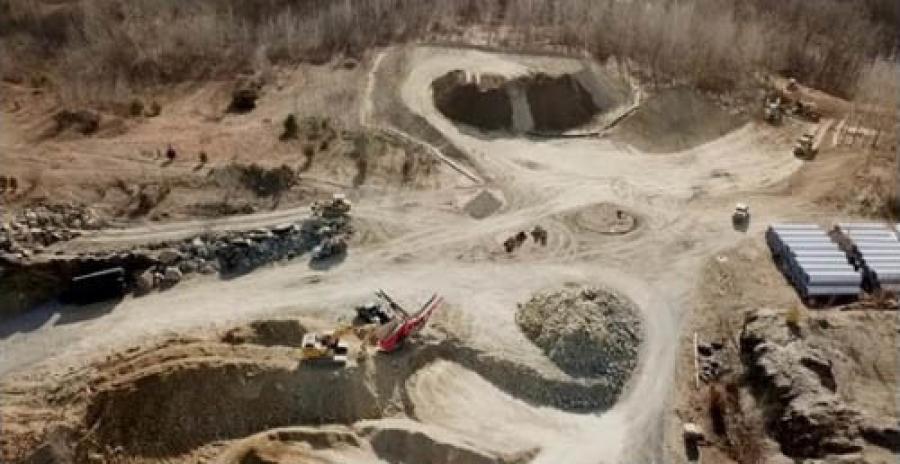 A multi-million dollar development project known as the Smithfield Gateway will be a mixed-use development near East Stroudsburg. (Legend Properties photo)

Construction of the much-anticipated Smithfield Gateway project in eastern Pennsylvania's Monroe County has begun as workers installed a 6-ft. pipe that will drain stormwater to Brodhead Creek.

It's the first physical step in a multi-year development process in Smithfield Township that will include the widening of U.S. Highway 209 and the construction of a residential and retail complex on the former Mosier Dairy Farm.

Fortunately, traffic won't be disrupted while crews from East Stroudsburg's Northeast Site Contractors place the pipe. Though the initial plan was to cut into U.S. 209, "it actually ended up being less expensive to bore underneath" the road, Olmstead explained.

The goal is to have the pipe beneath U.S. 209 by July, when developers expect the first phase of improvements to the road itself to begin.

At that time, the route will be widened from two lanes to five, including a center turn lane.

"If you've ever driven this road, and you try to make a left, it's just about impossible," said Jim DePetris, CEO of Legend Properties Inc.

The plan also calls for a loop road to run through the site, connecting U.S. 209 and PA Route 447. Along that street will be a mixed-use development, including more than 200 "higher-end" apartments, as well as several hundred townhomes or condominiums for seniors, DePetris explained.

Below the residential units will be retail shops and restaurants, as well as a "small, rather upscale grocery store," he added.

The Smithfield Gateway development "shows the types of trends that are really happening now," said Township Supervisor Jacob Pride. "What types of restaurants or residences do people really want these days?"

The site is the region's first entry into the "lifestyle center" category, a trend some of Legend Properties' investors have noted. It's about being able to "live, work [and] play" all in the same place, DePetris said, adding the development is designed to be "a concentration of activity so people don't have to drive everywhere. It [will be] convenient."

But the development of Smithfield Gateway wasn't inevitable. Legend Properties bought the Mosier Dairy property in 2015, and DePetris wasn't the first to try to develop the area.

"It's been tried many times over the past 25 years," he admitted, but explained that the primary obstacle was always the heavy traffic in the area. Only a project that directly addressed expanding U.S. 209 would work, DePetris pointed out.

Pride attributed the success of DePetris and his team to the "level of complexity and sophistication" with which they approached the project, as well as their dedication. He also praised their use of local contractors and noted their success elsewhere in the region, such as in Stroud and Pocono townships.

DePetris is confident that more development will follow, as it did when Legend Properties worked along PA Route 611 in the Bartonsville area.

"We believe that this corridor, which has been long passed by, will become a major activity for tax revenue and employment," he said.

According to Pride, more development is "certainly possible." The Smithfield Gateway will show developers and residents "what could really happen in our area, if given the right project and the right site."