A unique and highly versatile type of equipment popular in Europe has made its way to New England. 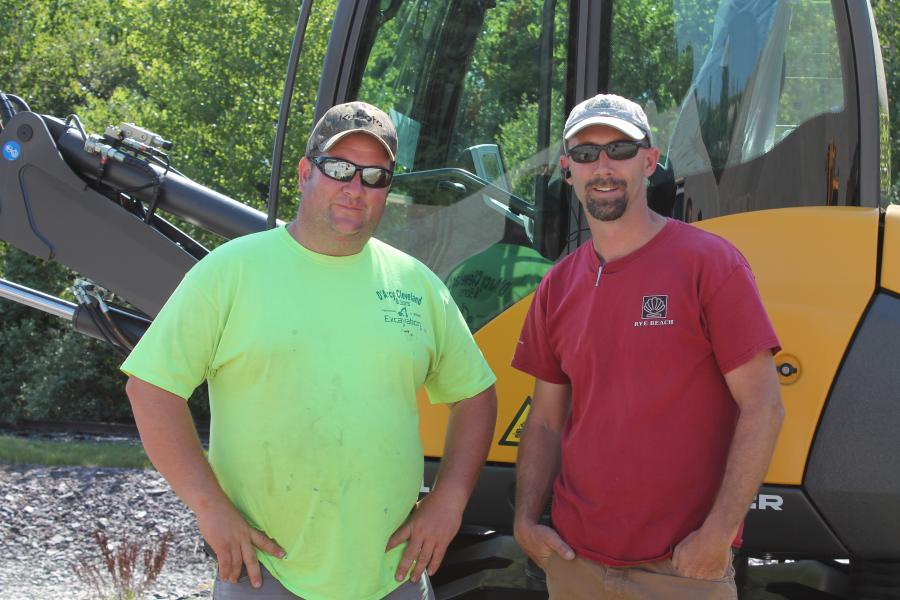 A unique and highly versatile type of equipment popular in Europe has made its way to New England — and in time, with the help of a New England equipment dealer, it will be available throughout the United States.

The Mecalac all-terrain HIGH SPEED skid excavator, which has changed how contractors move material and excavate in Europe, will now be exclusively available from Lorusso Heavy Equipment, located in Walpole, Mass.

“We are thrilled to announce that we were able to negotiate a deal with Mecalac to not only be a dealer for their product, but also to be able to take this one step further and help set up their distribution in the United States,” said AJ Lorusso, president of Lorusso Heavy Equipment.

The Mecalac MCR series combines the features of a skid steer loader, a compact excavator, a telehandler and integrates them with a unique, versatile boom.

“We'd been following the development of these machines for a number of years,” said Lorusso. “In 2013, at a visit to bauma in Germany, I was finally able to see these machines in action.”

The Mecalac all-terrain skid excavator can mount a skid steer bucket, perform all of the functions of a skid steer/track loader and lift and load materials to a pile or truck as high as 16 ft. (5 m), due to Mecalac's versatile boom with integrated high reach offset. The boom folds to 131 degrees, offering maximum stability and lifting performance.

The MCR can fully rotate while carrying a load up to 40 percent of its own weight. It also adapts well to unstable surfaces, can work on platforms in loader mode and gives the operator a 360-degree view of the surroundings.

Mecalac's Active Lock quick-coupling system allows the operator to switch out to attachment for digging, ditching, skid buckets, forks, handling plates and more, in seconds. Auxiliary hydraulics permit the use of standard hydraulic attachments, including hammers, augers, cutters and more.

All models have an over terrain speed in excess of 6 mph (9.7 km). The process of changing from excavator mode to skid steer mode is as simple as turning a switch inside the cab.

On July 16 in Walpole, Lorusso Heavy Equipment hosted a demo day, open to the public, to debut the Mecalac MCR series.

The demonstrations proved successful — the dealership already has sold its entire first shipment of 6MCR and 8MCR machines and are currently taking orders for a second shipment, due to arrive in late August.

Bob DiPoli, owner of R.A. DiPoli Co., with locations in Medfield, Mass., and Moultonborough, N.H., does small excavation projects. DiPoli, who attended the demo day, was impressed with the Mecalac line.

“I have been in this industry for over 30 years, and I have never seen a more versatile machine, ever,” he said. “I think this is going to be a game changer for contractors.”

D'Arcy Cleveland, owner of D'Arcy Cleveland & Sons Excavation, Pawcatuck, Conn., has been following the Mecalac MCR on YouTube for the past few years. Cleveland had a chance to operate the machine at Lorusso's event.

“I like it. It is very smooth and stable, and I think I should buy one,” said Cleveland, whose business involves septic system installation, site work, driveway and utility work. “This machine could truly replace [my] excavator and skid-steer and consolidate them down to the one Mecalac machine.”

Ben Holmes, owner of Rye Beach Landscaping in Exeter, N.H., also found the Mecalac machine online and has been anxiously waiting for them to make their introduction to the U.S. market.

After his test drive of the machine, he said, “I think it was incredible. The concept of having one machine operating as an excavator, skid-steer and telehandler will allow me to save time on the job sites. The ease of operation was surprising. The cab was very comfortable … just one day in the seat and an operator could get the hang of it — it wasn't nearly as complicated as I thought it would be.”

Mecalac has manufacturing facilities in France, Germany and Turkey and has earned numerous patents, design- and innovation awards in France.

Located in Walpole, Mass., Lorusso Heavy Equipment (LHE) serves the Massachusetts and Rhode Island markets and beyond. In addition to Mecalac, LHE carries Liebherr construction equipment and was recently named one of the top five dealerships in the United States by Hyundai Construction Equipment.

Established in 2009, Lorusso Heavy equipment prides itself on being a family-owned and operated business, committed to serving its customers with efficient, personalized attention.