Built in three phases, the line will stretch about 9 mi. (14.5 km) and include seven new subway stations. 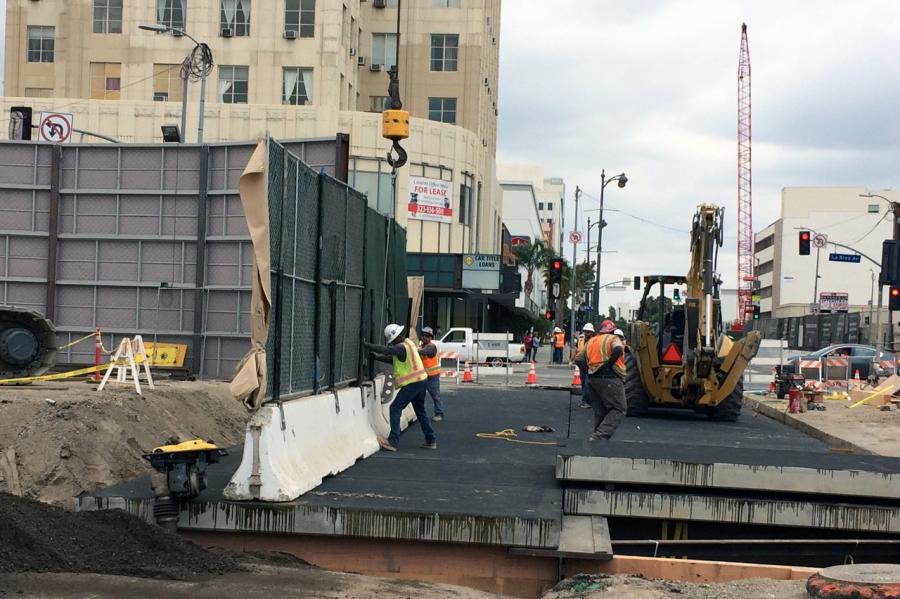 Built in three phases, the line will stretch about 9 mi. (14.5 km) and include seven new subway stations.

The Metro Board of Directors approved a $2.8 billion contract with Skanska, Traylor and Shea, a Joint Venture to design-build the first phase and section of the project.

Cost for the remainder of the project is estimated at $3.5 billion.

Besides the tunnels and stations, the project includes train control and signals, communications, traction power supply and distribution, and fare collection systems.

The Skanska, Traylor and Shea bid was the highest one for the phase 1 of the project. But Metro staff determined that the three-company venture offered the best opportunity to deliver the project on time and on budget.

Brian Freund is project manager of Skanska, Traylor and Shea, a joint venture.

The extension features more than 50 subcontractors. Some of the major ones include Condon Johnson & Associates of Ontario, Calif. for pile installation; Malcolm Drilling Co. Inc. of Baldwin Park, Calif. for ground improvement and stabilization; Dynalectric of Los Alamitos, Calif., for electrical work; and Group Delta of Irvine, Calif., for geotechnical monitoring.

About 250 workers will be on site during peak production. They include laborers, operators, carpenters, ironworkers and teamsters.

Project Will Connect L.A. to Westside

The extension is considered vital to the area known as Westside for its location just west of Los Angeles.

Overall, the project is a critically-needed subway extension along Wilshire Boulevard, one of the busiest urban corridors in the nation,” said Dave Sotero, communications manager of L.A. Metro. “When it ultimately reaches Westwood-VA, the subway will enable Angelenos to travel between downtown L.A. and Westwood in 25 minutes, a feat that is nearly impossible during the peak rush hour periods.”

It also will connect the two biggest job centers in L.A. County, downtown and Westside.

Sotero said the expansion project is currently on schedule and on budget.

The project has kicked off with construction under Wilshire Boulevard.

The first section of the Purple Line Extension is funded by local Measure R Funds, approved by voters in November 2008 along with federal “New Starts” matching funds and a low-interest loan from the U.S. Department of Transportation's Infrastructure Finance and Innovation Act program.

Metro is already working with the federal government to secure matching funds for the second project section. Metro also is pursuing additional funding to accelerate the entire project through a proposed half-cent sales tax measure that would be on the L.A. County ballot in November.

The first section of the extension project includes nearly 4 mi. (6.4 km) of subway westward from the Wilshire-Western Station. New stations along the extended line will include Wilshire-La Brea Station, Wilshire-Fairfax Station and Wilshire-La Cienega Station.

Metro officials expect the first section to be operational in 2023.

The project begins with excavation of a portion of Wilshire Boulevard and replacing it with concrete deck panels that will allow traffic flow to continue on the street while a station is excavated below.

Specialty equipment includes two new tunneling machines that are being constructed in Germany and a tower crane for La Brea Station construction.

Stations are usually 50 to 60 ft. (15 to 18 m) deep to allow easy passenger circulation from the station platform to the surface.

Tunnels between stations will be dug using tunnel boring machines that are lowered into the ground by cranes through a large shaft known as the TBM launch site. The machines tunnel at an average rate of 40 to 50 ft. (12 to 15 m) per day.

Local access for businesses and residents was maintained and sidewalks have been closed intermittently.

“Our construction relations (team) has done an excellent job in helping to mitigate construction impacts with local communities,” Sotero said. He said the team has conducted hundreds of meetings with community members.

Los Angeles County is expected to grow by another 750,000 people over the next 10 years. Metro believes it's important to provide more highway and transit alternatives and improvements to keep services in good operating condition.

Based on the analysis conducted during the final environmental impact report, the Purple Line Extension to the Westwood-VA Hospital station will generate about 49,300 daily weekday boardings at the seven new stations.

Also, construction of the Purple Line Extension is projected to generate 52,500 jobs within the region.