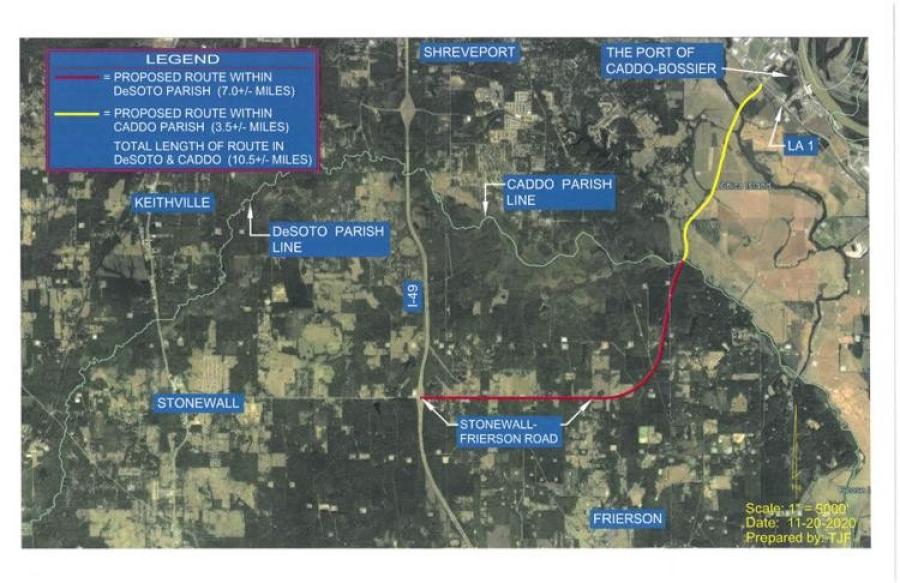 Currently, the new stretch is referred to as the I-69 Service Road. That’s because when or if Interstate 69 is constructed, this road will parallel the proposed route and continue to serve as a service road for the interstate.

A new 10.5-mi. highway that will provide direct access from Louisiana's Port of Caddo-Bossier to Interstate 49 is on a fast track for approval.

The DeSoto Parish Police Jury (DPPJ) and Port of Caddo-Bossier commission members at their separate meetings Dec. 14 approved of a cooperative endeavor agreement that also will include the Caddo Parish Commission and Northwest Louisiana Council of Governments (NLCOG). All are being asked to sign CEAs by month's end and commit to their portion of the funding.

Currently, the new stretch is referred to as the I-69 Service Road. That's because when or if Interstate 69 is constructed, this road will parallel the proposed route and continue to act as a service road for the interstate.

"This is a bit unique because even though it's part of an interstate it's on a fast track," said DeSoto Police Jury Administrator Steve Brown.

Discussions about the joint project started a year ago. Environmental studies are expected to be completed at the beginning of 2021, with the design following before the year is over.

"Construction will begin late next year, and it will be complete by December of 2022," Brown declared.

Working in favor of the four entities that are pitching in money is that the bulk of the funds for the $32-33 million roadway are already in hand. The Louisiana Department of Transportation and Development (DOTD) has committed 50 percent, NLCOG is providing $10 million and the rest is a mixture of federal and local dollars.

Brown said DeSoto Parish's portion amounts to $2 million. By comparison, he explained that is the same amount of revenue the Parish receives from one of the port's tenants, Pratt Industries, which brings its waste to the DeSoto Parish landfill.

"One year's revenue from them pays for the costs that are outlined," he added.

A benefit to keeping costs down is that the I-69 Service Road will follow the existing path of Stonewall-Frierson Road from I-49 until it veers northeast and heads to the port.

About 7 mi. of the service road are in DeSoto Parish; the remaining 3.5 mi. is in Caddo Parish. That is another benefit to the DPPJ as it already owns the 80-ft. right-of-way for about the first 2 mi. of the route.

DPPJ also must agree, Brown said, to work with DOTD in right-of-way acquisition on the remaining route.

"One of the biggest benefits of having the road is the ability to have commercial and residential economic development along that corridor," he explained, adding it as an "unlimited access road, meaning anything can be built off it.

"I don't have to tell you how important economic development is right now," continued Brown, who referenced the closure of Dolet Hills Mining and the impending termination of the Dolet Hills Power Plant as big blows to the Parish's economy. "Those are some good jobs we're losing so anything we can do to create a good atmosphere for good jobs is needed."