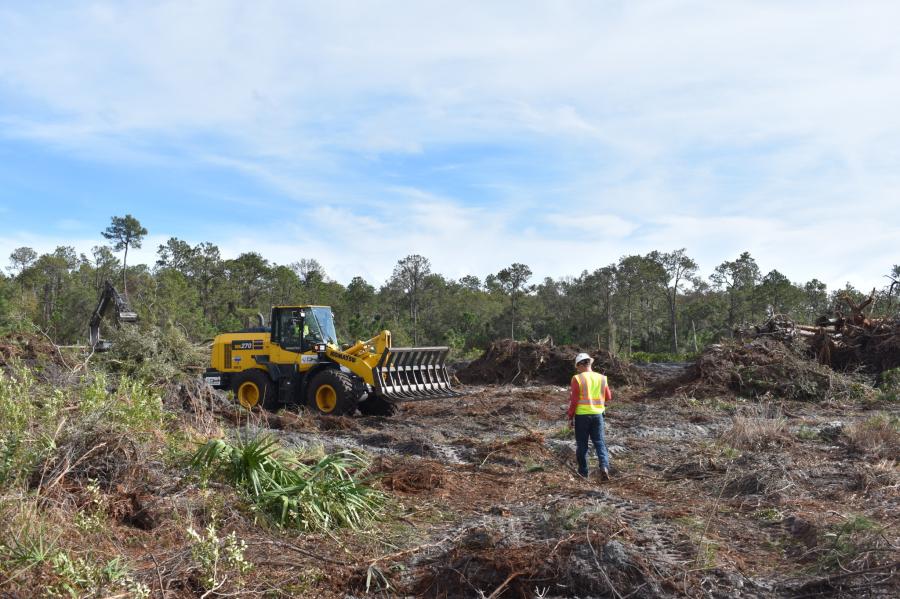 Site work is underway south of Tampa on a new $50 million project at MacDill Air Force Base designed to host more than two dozen of the U.S. Army's Black Hawk and Apache helicopters.

The work will include building a 92,000-sq.-ft. Aviation Support Facility that will serve the Army Reserve Aviation Command. When completed in October 2019, the new center will become a work place for more than 300 military and civilian personnel from the A and F Companies of the Army's 5th Battalion, 159th Aviation Regiment.

With them will come 23 UH-60 Black Hawk helicopters — all relocating to the base from the St. Petersburg/Clearwater International Airport, just a few miles away across Old Tampa Bay. The heavy-duty and reliable aircrafts are used for medical evacuation and battlefield transport.

In addition, an unannounced number of AH-64 Apache attack helicopters will also be housed at the new Aviation Support Center.

Hensel Phelps, the large general contractor with many high-profile projects across the country, is the lead builder on the 52-acre MacDill AFB job. The company employs several local subcontractors to assist in the construction.

One of these subcontractors is Tampa-based McKenzie Contracting LLC, a burgeoning company that began its work on the project last December. It's first task was to successfully secure all the necessary environmental compliance submittals to the Army Corps of Engineers prior to the ceremonial groundbreaking on March 23.

According to Ron Vinson, vice president of operations for McKenzie, his company is doing all the earthwork and environmental work at a project site surrounded by wetlands on all sides.

“When we came on the project January 3, it was three months behind schedule just in getting permits, and now we are clearing and de-mucking the site on what was a recreational skeet range, as well as an area for grenade-launch training,” Vinson explained in May.

Vinson said his company will be working at MacDill for about seven months this year due to the intricacies of the job, including installing more than 10,000 wick drains and 30,000 yd. of surcharge materials to see how the site settles. His crews also put in 20 settlement plates on top of the reconstructed land so that the Aviation Support Facility has a stable platform on which to rest.

In addition, McKenzie's utility work includes the installation of deep structures for the electrical contractor and all its associated de-watering and site work, Vinson said.

He estimated an average of about 12 people make up his crew each day, depending on the work schedule.

As the coming few months promise to be hot, humid and often rainy in Tampa, Vinson said he has a solid plan in place to deal with the elements.

“We do expect weather to be an issue, but we have implemented all of the control measures to mitigate the rainy season and that is why we have pushed the envelope on our production capabilities to try and facilitate the earthwork prior to any problems,” he added.

Structure work by Hensel Phelps will happen after most of McKenzie's work is done and after the settlement plates are given around 90 days to verify if any settlement occurs in the surcharge area.

Toward the end of the project in fall 2019, Vinson said his crews will come back to build additional runway tie-ins on the base's taxiways.

Vinson, who only came aboard with McKenzie late last year to manage the company's projects for Owner and President Dan Fernandez, credits much of the company's success to the outstanding working rapport it has with Tampa's Linder Industrial Machinery Co.

One of the Southeast's leading equipment dealers, Linder is known for being a major distributor of Komatsu heavy machinery, as well as many other reliable construction products.

But it also is known for establishing and maintaining excellent relationships with its customers.

There may be no better example of that than its friendship with Ron Vinson and McKenzie Contracting. He considers Linder key to keeping his operations flowing. As evidence, Vinson said, McKenzie has spent millions of dollars in product acquisition with Linder due to the dealership's expertise.

At the MacDill AFB site, Vinson has several pieces of equipment working that were provided to him by Linder. Among them are four Komatsu D51PXi-22 dozers with Intelligent Machine Control; two Komatsu PC360-11 excavators; two Komatsu WA270-7 wheel loaders; three Komatsu HM 400 off-road trucks; and two Hamm rollers (an H10i and an H11ix).

Linder also supplied McKenzie with a Topcon base-and-rover system to keep Vinson's office connected to his Komatsu intelligent dozers at the work site.

“My equipment from Linder has been top-end, from beginning to end,” he explained. “Something goes down and they fix it; something else breaks down and it is going to cost me time, they quickly replace it. They are extraordinary in their response. Their shop is about 45 minutes away and I don't think I have ever waited more than two hours to get help.”

Vinson is a veteran land developer, having spent 27 years in both civil and military construction, including time with the U.S. Army Corps of Engineers and the Department of Defense. He and Fernandez aim to continue to grow McKenzie Contracting into a company that builds projects in a precise, sequenced manner at a much larger scale.

To that end, he said the firm is instituting new earthwork methodologies and precise scheduling with Primavera P6 software, as well as data collection that it receives through the Topcon integration into the Komatsu products provided by Linder.

“For instance, a D51i dozer has a variety of different settings on it that allows us to adjust everything,” said Vinson. “So, if we are cutting and carrying, if we are fine grading, the efficiency with which it performs maximizes our profitability.”

As far as his truck capabilities, the Linder/Komatsu off-road haulers show Vinson how many tons they carry on a shift and give an accurate measure of total earthwork operation.

“At the end of the day I have live data that tells me what happened on my job,” he added. “I have cut-and-fill numbers and percentage of completion on my project every day through this intelligence.”

Vinson said that he and Fernandez share a vision of building McKenzie Contracting to a point that people think of the company as a nationwide leader in land development operations relative to American military construction.

But, he added, they also want to continue to work on the civil projects that gave their company its foundation. Included in their project portfolio are fire stations, retail stores, churches and current work at both the Tampa and Orlando airports.

“We will work on any military base in the United States and, as we are in Tampa, preferably the Southeast region, where Linder is also in tow and we can more easily ship our equipment. Being able to work with Linder and Komatsu is always something we will continue, as it is thanks in large part to their interdiction into our organization that we were able to go from a $3 million to a $20 million company within six months in 2017 to 18.”