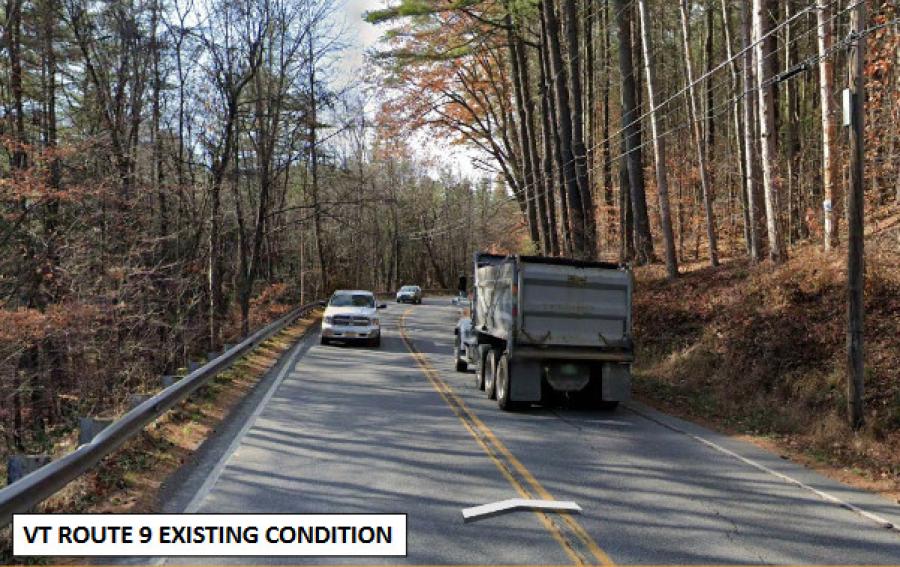 On many stretches of VT 9 the road travels close to unmovable landforms, such as ledges, and to waterways, such as the Deerfield River and Whetstone Brook.

The 46.96 mi. of Vermont Route 9 from the Chesterfield, N.H., bridge west to the New York State border has been around in one form or another since the 1760s.

VT 9 — officially the Molly Stark Trail through the entirety of its length in southern Vermont — is part of a key east-west route between Portland, Maine, and Albany, N.Y.

While the traffic on VT 9, designated a National Scenic Byway in 1995, has evolved over the centuries from slow-moving horse-drawn freight wagons to speeding trailer trucks, the route of this highway has improved little over the years — and it has been a constant source of aggravation for people who use it and the people who live along it.

The Commons, a Windham County, Vt., news source, reported that is the context behind the current $28 million improvement project on approximately 12.5 mi. of VT 9 from Edward Heights in West Brattleboro to Sun and Ski Road in Wilmington.

Work on the VT 9 improvement project began the second week of September by the primary contractor, Pike Industries Inc., of Belmont, N.H., according to Vermont Agency of Transportation (VTrans) Project Manager Matthew Bogaczyk.

A fact sheet from VTrans noted that the two-year building effort will reduce damage from potential floods at five specific locations along VT 9 beginning near Mile Marker 8 in Marlboro to Mile Marker 3.5 in Brattleboro.

Among the improvements scheduled for this section of the roadway, according to VTrans, are "armoring and constructing flood shelves along the road bank, creating access to a floodplain to reduce stream power and realigning the river channel to improve flow through an existing bridge."

The work will create permanent fixes for the sections of the highway that were destroyed by flash flooding during Tropical Storm Irene in 2011. Considerable damage was caused along VT 9, where the storm washed away several roadway segments between Marlboro and West Brattleboro. Destruction of the highway also occurred through the heart of Wilmington.

The result was that the entire 35-mi. stretch of roadway between Woodford and West Brattleboro was closed for nearly three weeks due to Irene.

In all, VT 9 was among 450 mi. of state highways that were damaged by the storm. It took a combination of VTrans crews, private contractors, and the Vermont National Guard to reopen the highway and other key east-west roads in southern Vermont, including VT 103, VT 11 and U.S. Highway 4.

"New gravel will be placed in some areas along the corridor to improve banking" during the repaving, according to information VTrans shared on the Marlboro community Facebook group.

"Additional work will include the replacement and maintenance of existing guardrail runs, some culvert replacements, [and] ditching and center line rumble strip [CLRS] installations where criteria have been met," noted the VTrans post.

The transportation department added that, when completed, VT 9 will be as "smooth as glass."

"The contract was structured such that [Pike Industries] could only perform some of the drainage and prep work for the [pavement] reclamation taking place next year," VTrans' Bogaczyk wrote in an email to The Commons. "As such, I am only expecting to see some ditching, shoulder restoration, underdrain installation and culvert replacements this year."

Next spring, VTrans and the contractor will start work on the roadway by giving it the first new paving job on that section of VT 9 in about 20 years. The focus will be on rebuilding the road surface before applying a fresh coat of asphalt.

Bogaczyk noted that the contractor also will install a new left-turn lane near Marlboro Elementary School for westbound vehicles to safely turn onto South Road in Marlboro.

The Commons reported that as recently as Sept. 2, though, VTrans produced a presentation about the project as part of the VT 9 Corridor Management Plan, noting that rights-of-way issues for property not already covered by such agreements could thwart plans for such a turn lane.

The department's presentation also listed work that will include:

"I have heard that the contractor is planning to work on some of the widening needed for this installation in the [current] construction season," he wrote.

In a public hearing in 2019, the VT 9 project was described as "one of the most complex projects" that VTrans has undertaken in recent years.

Part of that is due to the path of the highway, The Commons reported in a recent article. Ideally, VTrans likes to create roadways with 11-ft.-wide travel lanes and 4-ft.-wide shoulders, the news source noted. Where it was possible, VTrans did exactly that on sections of VT 9 in the 1990s to eliminate dangerous curves and narrow lanes of travel.

But it is impossible to build a roadway that wide on many stretches of VT 9, VTrans noted, because the road travels close to unmovable landforms, such as ledges; and to waterways, such as the Deerfield River and Whetstone Brook.

Those complexities effectively doubled the cost of the project, which VTrans first estimated at $14 million in 2018. The federal government will pick up 86 percent of the tab, with state bonding covering the rest.

Drivers on VT 9 can expect construction delays when the major construction work begins next spring. VTrans hopes to have everything wrapped up by the end of summer 2023.