Many New England Dams a Safety Risk, in Need of Repair 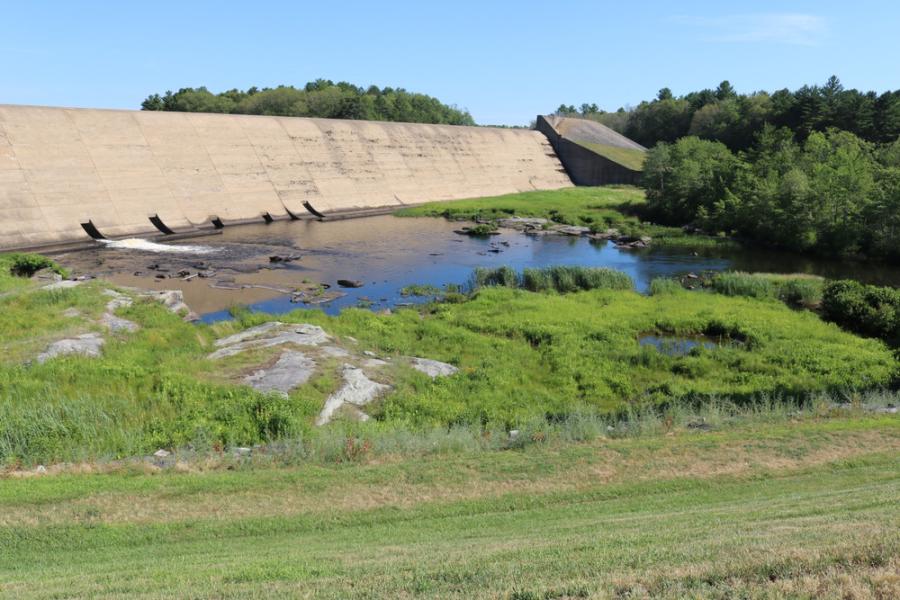 A review of dam inspection reports in northern New England found problems similar to those plaguing structures nationwide. Dams were cracking and eroding. Spillways were clogged with debris or unable to withstand 100-year floods. Animal burrows and overgrown vegetation plagued many structures, problems that can eat away at earthen dams.

CONCORD, N.H. (AP) Merrymeeting Lake is like so many others in the New Hampshire woods, a bucolic summer getaway of cabins and second homes where vacationers sail, swim and fish.

Like dozens of other lakes in the state, it also has a problem that is hidden from most of the people who come to enjoy it.

The lake's state-owned dam is in poor condition, due in part to a spillway that would not be able to handle a historic storm under certain conditions. State regulators also found the spillway's design is a problem: A buildup of water between the concrete slab and earthen embankment could erode the soil and lead to failure of the dam.

If that happened, water from Merrymeeting Lake could inundate a marina, a state fish hatchery, three state roads and several homes. Parts of New Durham, with around 2,600 people, also would be flooded.

"The concern we have with that dam is the spillway, the construction of the spillway. It's a design that we wouldn't probably incorporate now," said Jim Gallagher, the chief engineer in the state's dam bureau

The state has installed a drainage system as a stopgap.

The dam was among at least 1,680 nationwide identified by The Associated Press as high-hazard because of the potential for loss of life if they failed and considered to be in poor or unsatisfactory condition. Inadequate or poorly designed spillways were cited as a problem for many of the dams identified in the more than two-year investigation .

Emergency action plans obtained by the AP indicate that thousands of people living and working downstream could be at risk if those dams were to catastrophically fail, while separate inspection reports cite a variety of problems. Those include leaks that can indicate a dam is failing internally, unrepaired erosion, holes from burrowing animals and extensive tree growth, which can destabilize earthen dams.

The AP's investigation covers the U.S. territory of Puerto Rico but excludes five states that did not fully comply with records requests.

New Hampshire, Vermont and Maine had 51 of the potentially problematic dams. New Hampshire had the most, with 37, followed by Vermont with nine and Maine with five. The numbers could have changed if repairs had been made since last year.

Many of the dams were built decades, if not centuries ago, to provide water and power to textile mills and other manufacturing shops. But today, most structures that hold back ponds and lakes are for recreation, drinking water and hydropower.

A review of dam inspection reports in northern New England found problems similar to those plaguing structures nationwide. Dams were cracking and eroding. Spillways were clogged with debris or unable to withstand 100-year floods. Animal burrows and overgrown vegetation plagued many structures, problems that can eat away at earthen dams.

More than 50 dams have failed in New Hampshire over the past 100 years, though deaths are rare. One exception was the Meadow Pond Dam, which failed in 1996, killing a woman and flooding a small neighborhood. Nearly 70 have failed in Vermont, including the 1947 failure of East Pittsford Dam that devastated Rutland.

Some of the problems with high hazard dams go back years but have not been addressed because of inadequate government funding or an inability or refusal by private owners to make the repairs. An example is East Long Pond dam in Woodbury, Vermont.

State inspectors found the dam has an inadequate spillway, seepage on its auxiliary spillway and a downstream retaining wall that appeared unstable. Overgrown vegetation prevented inspectors from evaluating some parts of the dam.

According to its emergency action plan, a failure of the East Long Pond dam would flood 215 properties in the towns of Hardwick and Woodbury, 20 roads and overwhelm three dams downstream.

The state has recommended the dam owner, Hardwick Electric Department, make repairs to the spillways and improvements to the dam embankment. Removing the dam also is an option.

But state officials acknowledged they lack the authority to force Hardwick to make repairs. The dam safety program received rule-making authority only in 2018, and the rules allowing enforcement of its findings are being drafted and won't be ready until 2022.

"It is difficult to regulate all but the worst of the worst dams," said Ben Green, Vermont's chief dam safety engineer. "Right now, we don't have a lot of tools to require owners to make repairs."

A request for comment left with the Hardwick Electric Department was not returned.

The Lake Christina Dam in Maine, which is owned by potato processor McCain Foods, is another rated in poor condition, according to the AP's investigation.

Inspectors say the dam has no emergency spillway and could not find construction records that would show what materials were used to build it. An analysis had also not been done to determine if it could withstand a historic storm.

If the dam failed, its emergency action plan said the flood waters could inundate at least two dozen homes. McCain Foods did not return a request for comment.

Maine dam safety officials said they are hoping to visit the dam soon but acknowledged one of their challenges is trying to inspect 600 dams in the state with just two staffers. The state's staffing and funding for its dam safety program are among the lowest in the country. That's similar to Vermont, which also has two full-time dam safety inspectors.

Several states are finally getting federal help. New Hampshire and Vermont are among those benefiting from a $10 million grant program run by the Federal Emergency Management Agency.