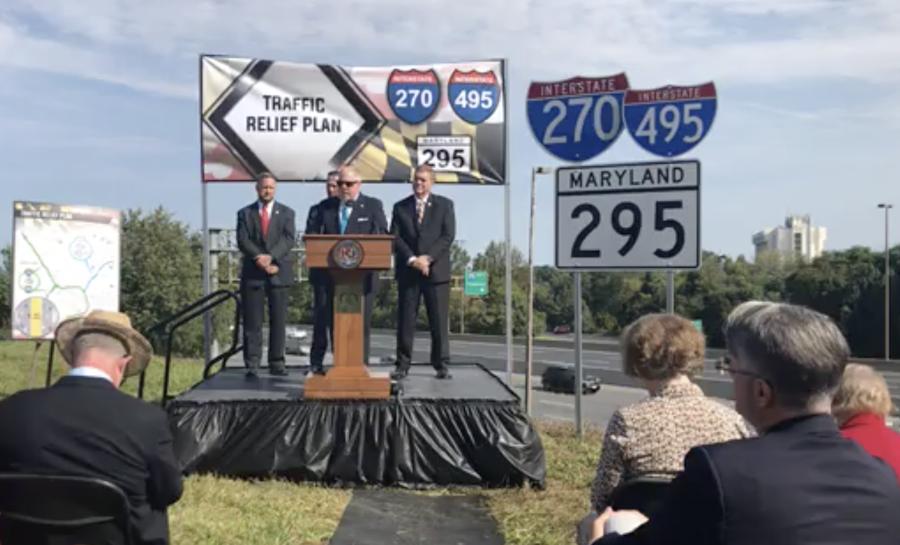 Maryland Gov. Larry Hogan announced on Sept. 21 the administration’s plans to add four new lanes to I-270, the Capital Beltway (I-495) and the Baltimore-Washington Parkway (MD 295). (MDOT photo)

Delivering on his commitment to provide innovative transportation solutions for Maryland, Gov. Larry Hogan announced on Sept. 21 the administration's plans to add four new lanes to I-270, the Capital Beltway (I-495) and the Baltimore-Washington Parkway (MD 295). The $9 billion Traffic Relief Plan for these three major state highways will reduce congestion for millions of drivers and mark the beginning of a historic and transformative effort to significantly improve the traffic conditions on some of Maryland's most traveled roads and highways for years to come.

“These three massive, unprecedented projects to widen I-495, I-270 and MD 295 will be absolutely transformative, and they will help Maryland citizens go about their daily lives in a more efficient and safer manner,” said Hogan. “Today, we are turning Maryland's celebrated innovation into real action. These projects will substantially and dramatically improve our state highway system and traffic in the region.”

The announcement officially begins the process to solicit the Public-Private Partnership (P3) industry for input and solutions to provide major congestion relief to these key transportation routes. With the total project estimated value at $9 billion, the P3 portion to add four new lanes on both I-495 and I-270 is the largest proposed P3 highway project in North America. The P3 will be seeking private developers to design, build, finance, operate and maintain new lanes on I-495 between the American Legion Bridge and the Woodrow Wilson Bridge and on I-270 between I-495 and I-70. Once completed, the Traffic Relief Plan will deliver new express toll lanes, in addition to existing lanes, on I-495, I-270 and MD 295.

“Using innovation and partnering with some of the greatest minds in the world, Maryland is going to finally get some congestion relief by investing $9 billion in three of the most congested highways in the state,” said Rahn.

The first step to build new express toll lanes on MD 295 will begin with the transfer of MD 295 from the U.S. Department of the Interior to the Maryland Transportation Authority. Hogan has already personally started this process during a recent meeting with Interior Secretary Ryan Zinke and has directed MDOT officials to move forward with the transfer negotiations.

Following the transfer, the Maryland Transportation Authority would then build, operate and maintain the new lanes and maintain existing lanes between Baltimore and Washington, D.C.

The Traffic Relief Plan is critical to spurring increased economic development and restoring quality of life for countless Marylanders who have been negatively affected by years of traffic congestion.

Maryland has the second-longest commuting times in the country, and the National Capital Region is the most congested region in the nation based on annual delay and congestion cost per auto-commuter.

The statewide cost of congestion based on auto delay, truck delay and wasted fuel and emissions was estimated at $2 billion in 2015. This is an increase of 22 percent from the $1.7 billion estimated cost of congestion in 2013. More than 98 percent of the weekday congestion cost was incurred in the Baltimore/Washington region.

In making this announcement, Hogan has directed MDOT to issue the Request for Information to the P3 industry and continue the transfer process with the U.S. Department of the Interior.