A view of the Sawyer Free Library's planned addition, extending toward school street is seen in this rendering. (Oudens Ello Architecture rendering)

The Sawyer Free Library in Gloucester, Mass., is going ahead with its plan to construct a 15,000-sq.-ft. addition on its School Street side. The effort is estimated to cost $28 million but is designed to update the old city's library into a modern, more inviting space.

"What we are looking at is a renovation addition that will bring us into the future," Simon Paddock, a Sawyer Free Library trustee and chair of its Capital Projects Committee, said while speaking to the Gloucester Daily Times.

The Gloucester Lyceum and the library have served the seaport on Cape Ann from the corner of Dale Avenue and Middle Street for 138 years. Next year, the city will mark 400 years since its first settlement.

The Sawyer Free Library is a popular retreat in the northeastern Massachusetts town, as nearly 15,000 people, just under half of Gloucester's population, hold a library card.

During construction, the library will remain open, but will move to a temporary location that has yet to be determined, Jenny Benedict, the library's director, told the Gloucester news source.

The project will be funded through philanthropic donations supported by an integrated media fundraising campaign that launched the second week of May.

A $9.3 million matching grant from the Massachusetts Board of Library Commissioners Construction Grant Program is expected to pay for a third of the estimated cost, according to the Daily Times. A provisional grant announcement is expected this summer.

Including the grant, the campaign has thus far raised $14.1 million, the newspaper reported May 11.

Library officials said the goal is to increase annual visits by 25 percent, public programming by 25 percent, and the number of programs hosted by its many partner agencies by 50 percent.

Marion "Mern" Sibley, president of the library's Board of Trustees, said a lot has changed since the Monell Building, the library's main building, was completed in 1976.

In speaking with the Daily Times, Sibley said the present library lacks meeting space, restrooms need to be updated to be fully compliant with the Americans with Disabilities Act (ADA), and there are no private reading rooms. In addition, the building's systems have reached the end of their usefulness, and the building is unsuited for modern technology.

The original structure, the historic Saunders House, was built in 1764 and converted to library use in 1884. It was added onto in 1913 and again in 1976. The Saunders House is presently used as staff offices and storage. A separate project is planned to restore and open it to the public.

The Gloucester newspaper reported that the push to update the library dates to 2016, when officials submitted a schematic design to the Massachusetts Board of Library Commissioners to replace the Monell Building in its entirety.

But the community rejected that approach, which led to the idea of renovating the existing Sawyer Free Library building instead, Paddock said.

Those plans are currently in the design and development phase, he told the Daily Times, which includes refinements to the interiors and exteriors.

Boston-based Oudens Ello Architecture is the library's architect and has started the process of selecting a construction manager.

What Features Will Be Found in the Renovated Library?

The expansion project will increase the library's space by using a portion of the parking lot at the back of the building — something Paddock said has always been contemplated.

"That space was made available for the addition early on in the project," he explained.

The architect's plans call for the first floor to be a large reading room with book stacks as well as a quiet reading room and a 14-seat conference room.

Other additions and upgraded portions of the library include:

Paddock added that accessibility, sustainability, health and safety have been key components of the Sawyer Free Library project. For instance, the building's front entrance on Dale Avenue will be made handicapped accessible — something which it is currently not.

Peter Lawrence, a member of the Capital Projects Committee, told the Daily Times that to tackle climate change, the new library's buildings will be LEED Gold Certified Net-Zero-Ready with energy efficient systems, solar panels and battery backup that could serve as an educational demonstration project.

He explained that the library plans to secure a 100 percent renewable energy source for the added electricity. 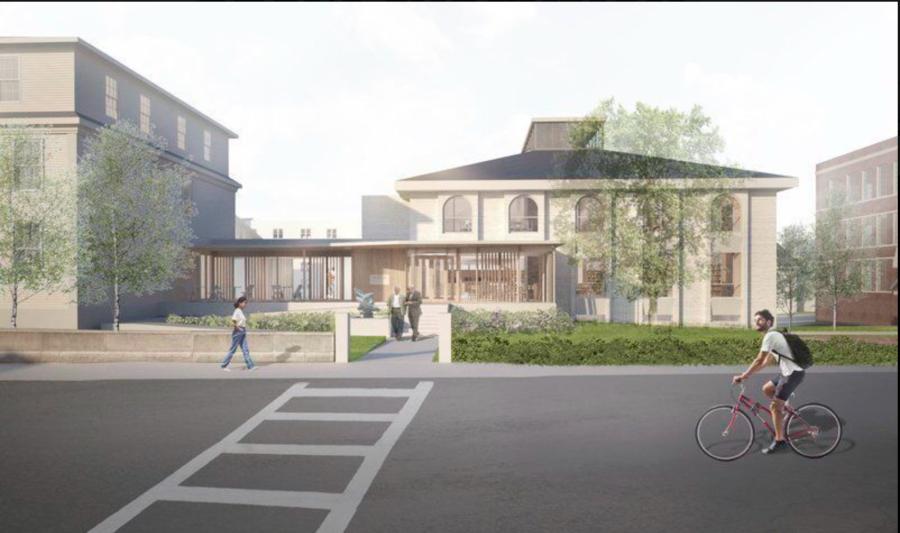 The design concept for the renovation of the from of Sawyer Free Library. It preserves the facade designed by Donald Monell. (Oudens Ello Architecture rendering)